On 06-10-16 at about 2356 hours, South San Francisco Fire Department and Police Department were dispatched on a report of a major-injury traffic collision on Airport Boulevard at Pine Avenue in South San Francisco. Police Officers and Fire Personnel arrived on scene and found two vehicles at the scene. One vehicle, a green 1994 Honda Civic had massive damage and been cut almost in half. Two passengers in the Honda were found ejected from the vehicle. Both passengers from the Honda suffered severe traumatic injuries and were pronounced deceased at the scene. The driver of the Honda suffered non-life-threatening injuries. The other vehicle, a Mazda had minor damage and the driver and passenger in that car were uninjured.

The subsequent police investigation revealed that the driver of the Honda, 19 year-old (S) Joshua Matthew Maldonado was recklessly driving a vehicle southbound on Airport Boulevard at a high rate of speed of approximately 80 to 90 MPH in the 35 MPH zone. Maldonado’s Honda had a glancing collision with the Mazda at the intersection of Pine Avenue. The collision caused Maldonado’s vehicle to collide with one tree at the side of the road, roll-over and then collide with a second tree.

Maldonado displayed the objective signs and symptoms of being under the influence of an alcoholic beverage. Maldonado was transported to a local hospital for treatment of non-life-threatening injuries. Maldonado was later placed under arrest at the hospital. Maldonado was subsequently released from the hospital later in the morning and is pending booking into the San Mateo County Jail for the following charges: 2 counts of 187 PC (second degree murder), 2 counts of 191.5(a) PC (gross vehicular manslaughter with gross negligence), 23153(a) VC (felony DUI with a collision causing injury or death), and 23153(b) VC (felony DUI with a blood-alcohol of over .08% BAC).

The identity of the passengers who were pronounced deceased at the scene is not being released at this time pending notification by the San Mateo County Coroner’s Office.  One  victim  was  an  18 year-old  female from  San Francisco  and the other victim was a 21 year-old  male from   Brisbane.

This investigation is on-going and anyone with information regarding the traffic collision or who may have witnessed any of the driving leading up to the collision is encouraged to contact the South San Francisco Police Department at 650-877-8900, the anonymous TIP line at 650-952-2244 or via email; at tips(Zilssf.nct

UPDATE: It has been reported that the 21 year old male victim is the brother of the driver. We offer our deepest condolences to the families and friends of everyone involved in this horrific accident. 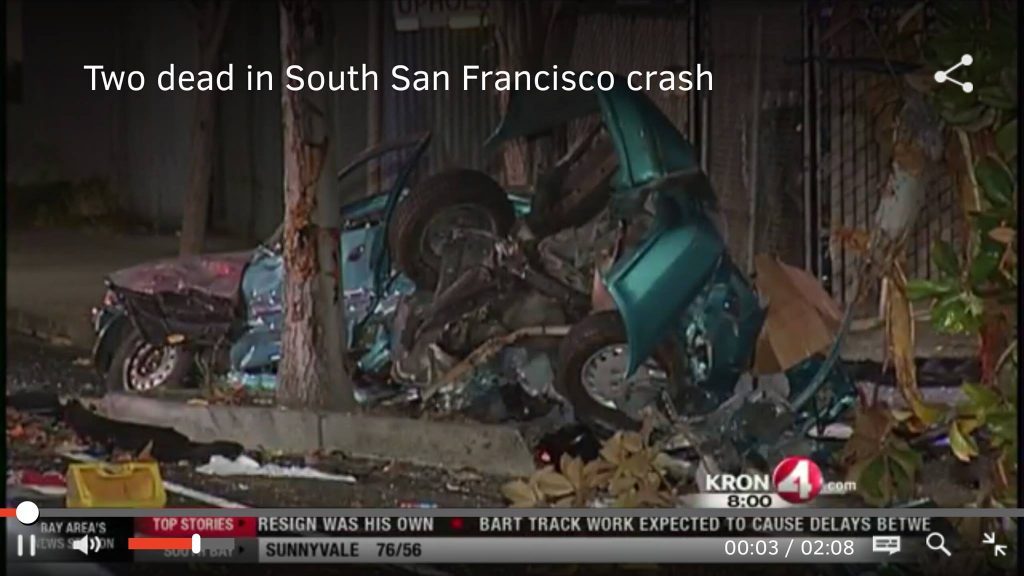 Very high rate of speed. While seat belts save lives this may have been unsurvivable. Kids, make sure to speak up to the driver you’re riding with if they’re driving in a careless manner. – William Shon, SSF Resident (FB post)