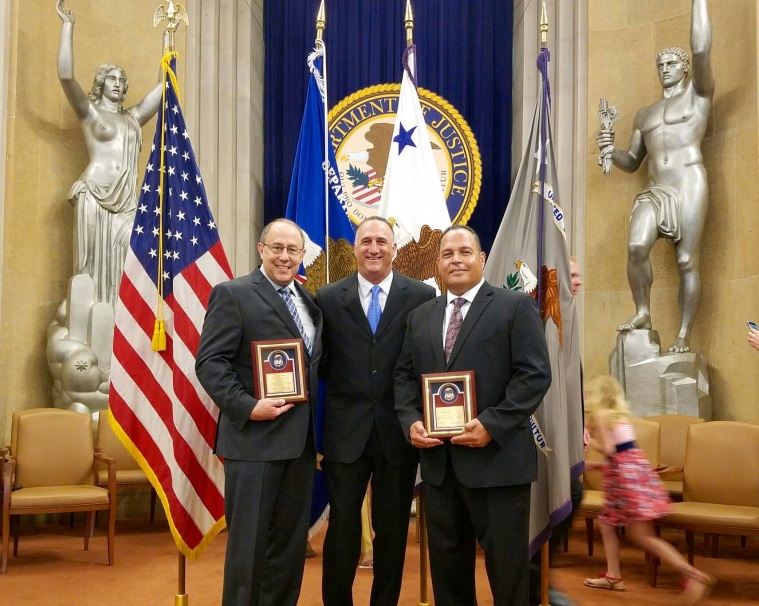 Deputy Attorney General Sally Yates and Executive Office for U.S. Attorneys (EOUSA) Director Monty Wilkinson honored them at the 32nd annual Director’s Awards Ceremony recently held in Washington D.C.
In her prepared remarks, Deputy Attorney General Yates said, “The achievements recognized reflect the breadth of the department’s responsibilities, and some of our most significant challenges. From dismantling dangerous gangs, drug cartels and human trafficking operations to tackling political corruption, white-collar crimes, and international terrorism, these awardees have taken on our toughest cases. And the citizens of our country are safer because of their work.”
Garcia and Bordigon are the first South San Francisco police officers ever to receive this prestigious award, which was for “Superior Performance by a Litigative Team.”
After an eighteen-month investigation by Homeland Security Investigations, the South San Francisco and Daly City Police Departments, as well as a two-year prosecution that culminated in a three-month, four defendant trial spanning the summer of 2014, 18 members and associates of the 500 Block C/Street Gang were convicted on various gang-related charges. These charges included racketeering conspiracy, racketeering murder and attempted murder, Hobbs Act robbery, obstruction of justice, and attempted murder of federal agents. The 500 Block/C Street Gang terrorized the streets of South San Francisco, and its members were responsible for a shooting that left three young people seriously injured, and — in one of the most violent episodes in South San Francisco history — three young men were wounded in a shooting and three others killed. Also, when agents sought to arrest one of the suspects, he opened fire and gravely wounded three agents before surrendering.
South San Francisco Police Chief, Jeff Azzopardi attended the award ceremony in Washington D.C. and said this award would not have been possible without the diligent work of many organizations. “Words can’t express how proud I am of Sergeant Garcia and Corporal Bordigon – to be recognized among law enforcement professionals from all over the United States, is truly an honor.”
“We honor the truly talented and dedicated legal and administrative personnel in the 94 U.S. Attorneys’ offices and our law enforcement partners who everyday touch lives in our communities, protect the American people, and work to ensure the fair and impartial administration of justice,” said Director Wilkinson.
EOUSA provides oversight, general executive assistance, and direction to the 94 United States Attorneys’ offices around the country. For more information on EOUSA and its mission, visit http://www.justice.gov/usao.

More on these murders can be found CLICK HERE