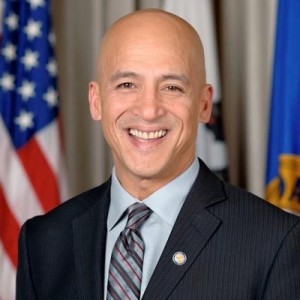 Elected leaders including County Supervisor Adrienne Tissier and State Senator Jerry Hill joined other officials from throughout San Mateo County at Daly City Hall today to express their support and endorsement for Daly City Councilman Mike Guingona in his race for San Mateo County Supervisor. The endorsements represent a coalescing of support behind Guingona over that of his remaining opponent.

“The leaders who have newly endorsed my candidacy represent a broad cross section of elected officials from District 5 and represent a remarkable consensus in support of my candidacy,” said Guingona. “I am both humbled and grateful and I look forward to working with these great leaders in the months ahead during this important election.”

Joining Tissier and Hill in attending and supporting Guingona were Colma Vice Mayor Helen Fisicaro and Brisbane Mayor Cliff Lentz, both of whom were candidates for the seat sought by Guingona but did not received enough votes in the June primary.  Guingona faces fellow Daly City Councilmember David Canepa in November.

“I want to thank both Helen Fisicaro and Cliff Lentz for adding their support to my campaign,” said Guingona.  “They were formidable opponents in the primary and I’m now honored to have them supporting me in November.”

Guingona is receiving a boost from elected officials at all levels of government, State office, County offices and local Mayors and Councilmembers, many of them will be in attendance at the press conference to speak in favor for Mike Guingona’s candidacy.

Also in attendance was San Francisco Supervisor Scott Weiner, who is a candidate for State Senate and would represent Daly City if elected.   Fellow Daly City Councilmember Judith Christensen, who has supported Guingona from the beginning of his campaign, was also in attendance.

“This is a significant and positive boost for my campaign,” said Guingona.  “These are well-respected officials who bring the prestige and support of their own positions to this campaign and it has energized my supporters.   I am very excited to have them all come on board and thank them for their confidence in me.”