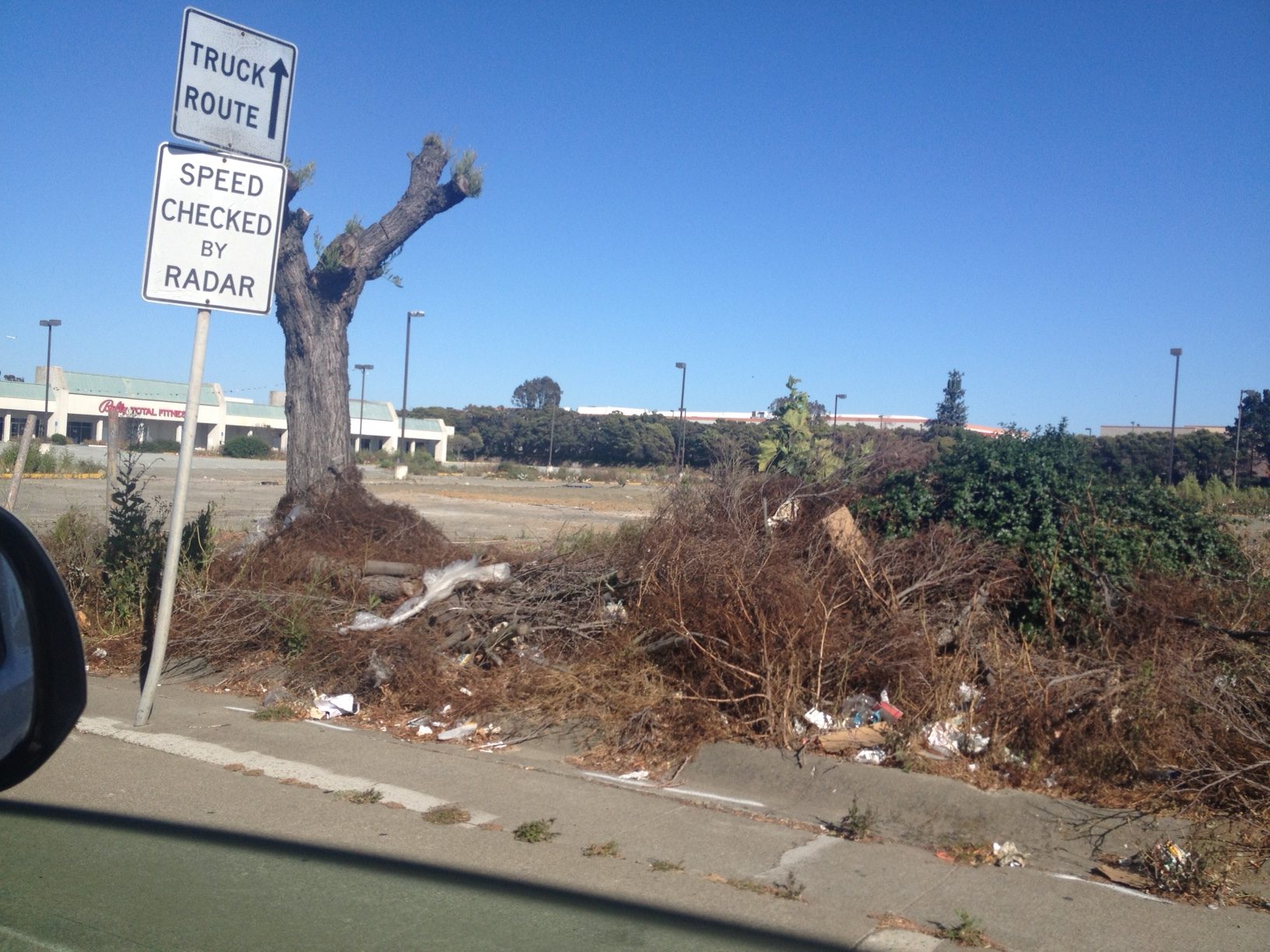 A recent call from a long time Brentwood neighbor echoed the words of concern we have received from others upset at the proposed Centennial Village development the past few months. The Safeway store closed two years ago frustrating residents who have been vocal over the need for a ‘decent’ grocery store in our City. The Firestone building has been demolished yet the shopping center is a blight to the neighborhood locals protest. 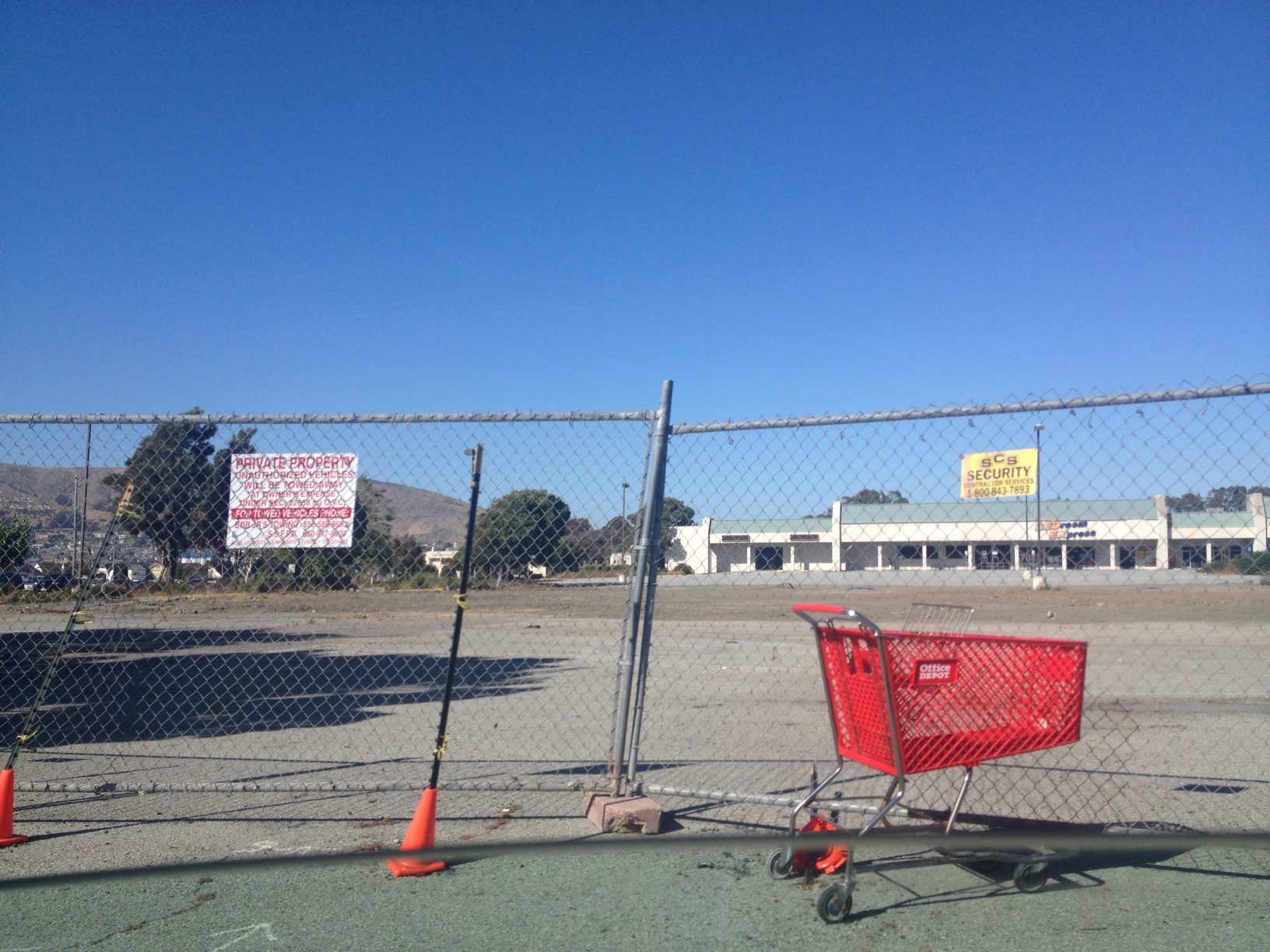 “Why was I fined $100 from the City code department over my stupid garage can being left out” Bill S asks “But this huge corner (Spruce at El Camino Real)  can look like this and no one says a thing!” When we suggested he contact the City he exclaimed “Why should I have to contact them? This is something everyone sees – don’t they?” 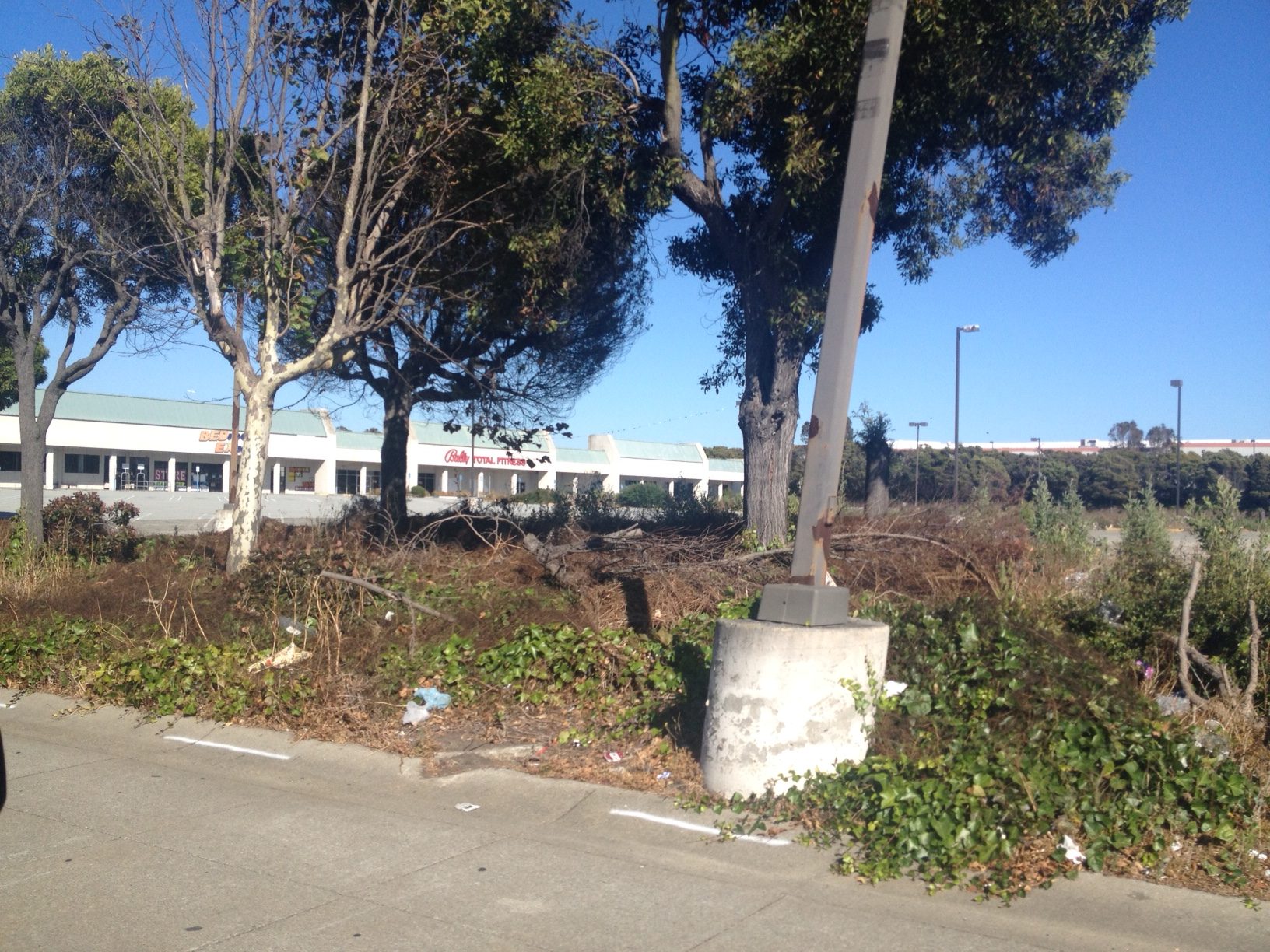 Another neighbor from the Terrace recently wrote us asking when construction would begin. “I’m concerned about the noise, traffic, and debris when they really get started on this” they said. “So far this thing keeps being delayed and continues to look worse and worse.  I’m tired of shopping in San Bruno. But this looks awful now, when are they going to clean it up? When are they going to complete this?!!’

The Brentwood neighbor agreed she too is tired of going to other Cities to do their shopping and was glad to see the Westborough (Pak n Save) Safeway renovated. “It sure looks a lot better” she said. “But the blight on El Camino across from me is terrible. Why hasn’t the City done something? The Firestone building has been demolished but now the bulldozers are gone – are they going to finish or what? Who is responsible for keeping that area cleaned up? It looks terrible.”

While local police and fire agencies have been using the abandoned buildings for training purposes, no one appears to care about the blight this corner reflects. 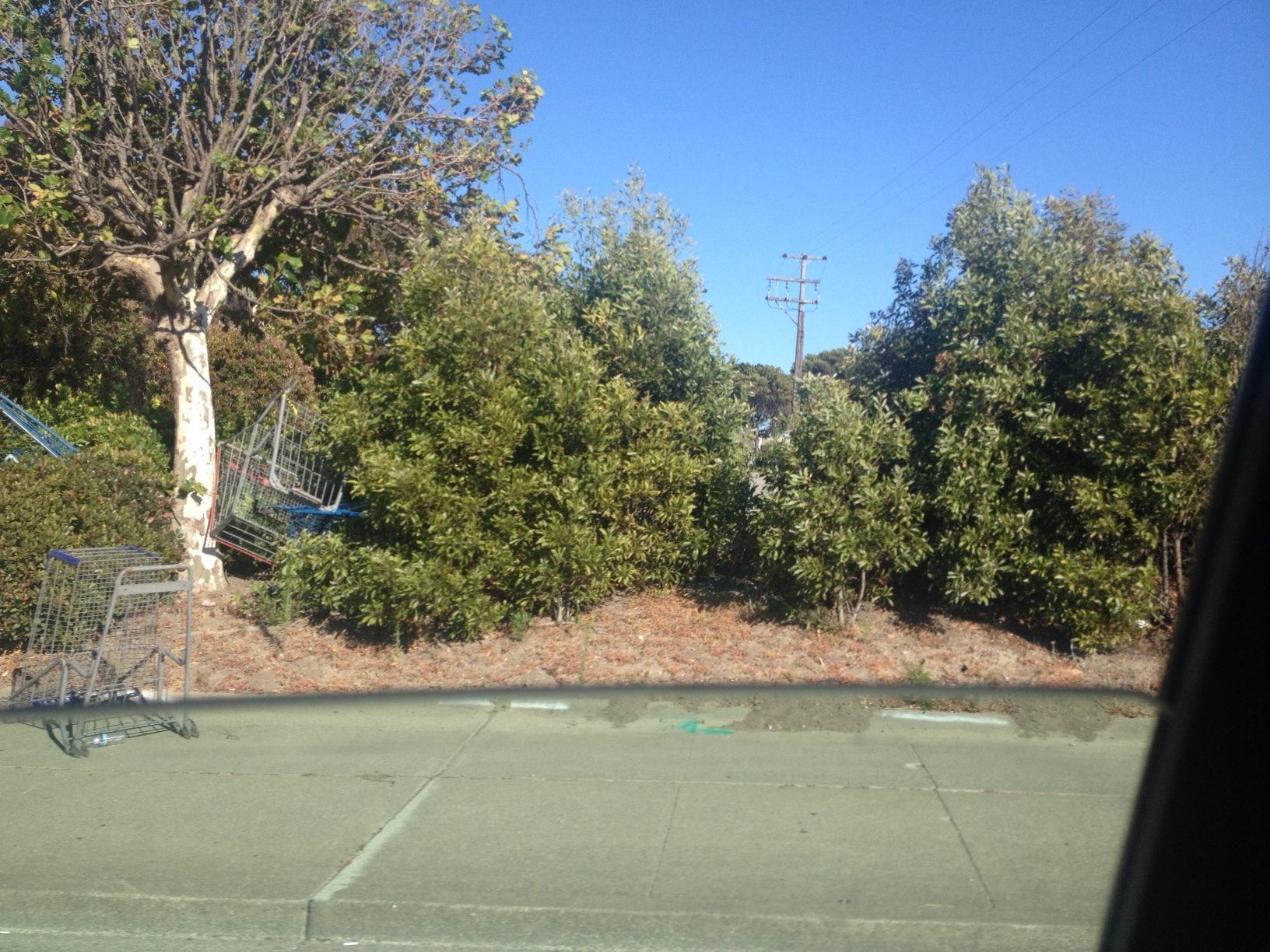 Discarded shopping carts can be found all along the abandoned site.

Neighbors are rightfully concerned about the impact this development will put on the local area as the project is reported to take 2 years to complete. ‘I cant imagine how congested Spruce and El Camino will be around 5pm M-F. 285 apartment units= at least 200 cars added to SSF!!!’ Fabs commented.

But for now the local neighbors and those who travel the El Camino Real Corridor insist those responsible for this property to remove the blight. “They need to show us they are going to be good neighbors”  The Francisco Terrace neighbor wrote. 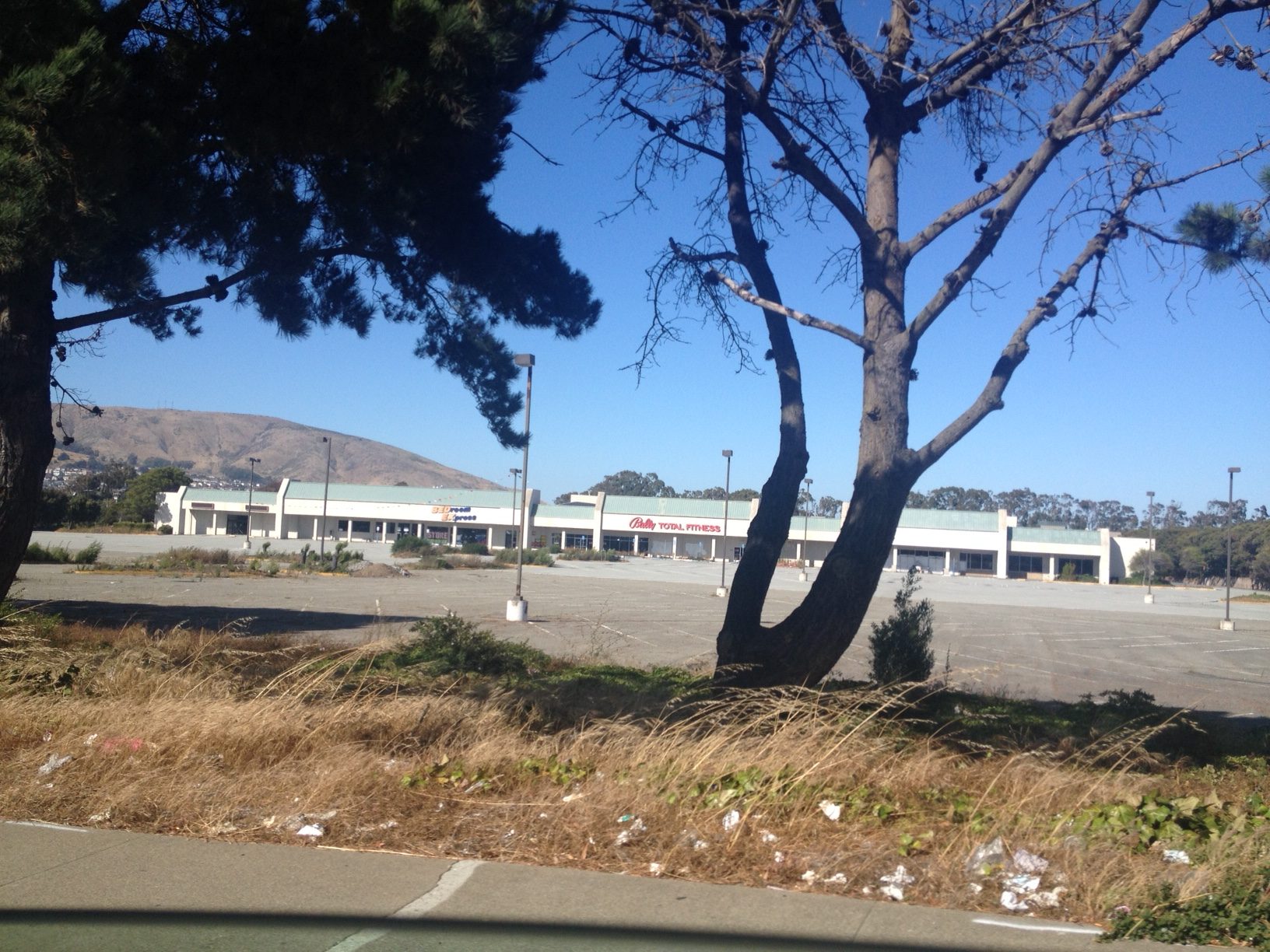 For more on this development, neighbors comments, etc CLICK HERE

If you would like to report an issue to Code Enforcement anonymously please call 650/829.6682.

UPDATE July 17, 2016 Below are the responses from residents from our Facebook page:
Deb Behan Sooooooo true

Gloria Garcia-Licea In Rancho Cordova I left mine out one day….because I washed it! The city left me a note on my door. ?

Ray Bartolo This City does not, nor has it ever led by example. I’m tired of looking at this eye sore of a once so called “shopping center”. City officials don’t seem to motivated to do anything about this.

Loretta Fornaciari I pass by this corner every day and it makes me mad that the city has turned a blind eye to this mess. Heaven forbid if a regular citizen of ssf leaves a debris can out to long they are fined but these owners can get away with their property looking like this, I quess money talks.

Sergio Jauregui If this happened anywhere near Genentech, it would be demo’d already and construction would have begun, cause that’s where the new money’s at.

Dino Fontana That center looks like **it! it has for years.. No one is accountable for it apparently.. =/

Tim Miller They enforce complaints, if you complain they will come, hopefully.

Lorna Feger The building at Rockwood and Brentwood is an eyesore too. The city allowed trucks to be parked on the sidewalk for months and did nothing. It seems the city only harassed it’s residents and let’s businesses get away with anything!

Dana Compani What is that supposed to be? I hate it so far and the poor residence next door.

Stephen Ward Why cant they fine the owner of this vacant land? The city was in a great rush to evacuate the tenants. Has anybody seen the backside of these buildings?

Debbie Wall While you’re on the subject take a Good look at buri buri school!!!! Talk about blithe, eyesore and an injustice to the children that have to attend as well as the teachers who are expected to teach!!!

Everything South City Debbie Wall we just rec’d an update on Buri construction – fyi https://everythingsouthcity.com/work-at-buri-buri…/Work at Buri Buri School Site Will be Speeded Up
EVERYTHINGSOUTHCITY.COM

Laura Flynn Peradotto I agree this is an eye sore.

Laura Flynn Peradotto The City likes to pass the buck. Not there falt that it’s a mess and that all that we go in the drain and cause more damage when it rains. The City says there never at fault.

Ann Marie Gazzano Drive by all the time, total mess. Surprised it hasn’t been tagged with spray paint yet. Another spot that almost turns my stomach is in front of Peet’s coffee downtown, on the airport blvd side, gross filthy garbage cans left out always, covered in pi…See More

Lesley Cassandras I know,right! We walk by there almost every day and it’s awful!

Sergio Jauregui Shouldn’t the street department have to clean that up?

Ann Marie Gazzano I would think so, and Peet’s should put away the garbage cans..or whoever they belong to.

Loretta Fornaciari I agree that buri buri school looks horrible, that what you get when the low bid is chosen instead of a responsible bid. Contractor was fired and nothing has been done since.

Lucinda Denning I wish they would start tearing that down. It has been months since I left in December. It’s tearing my heart since I worked there for 20yrs at that location. Not that long ago someone graffiti by safeway and I noticed someone painted white paint over it. I’m like wtf tear the damn place down

William Shon Because it’s a lot easier to victimize the common citizen than go after wealthy and connected business concerns which can afford to make legal action very costly and time consuming.

Gretchen Eberle ROCKWOOD/BRENTWOOD SITE: another dump!
SMART & FINAL TRAFFIC: double parked semis on residential streets constantly
BURI BURI SCHOOL: $11 million in the red and no resolution. Borrowing from the general fund for that?
FRANCISCO TERRACE FLOODINGS: houses flooded because drainage not attended to
THE NEW POLICE STATION: Why did we pass a bond for this when all of the above are sure failures?
ALL SSF ISSUES. We pay taxes and pass bond measures so our town can be nice. WTF is going on in SSF government? Besides a bunch of back patting…
Lucille Gutierrez Hernandez Thanks for writing your response. I totally agree with you

Gretchen Eberle to Steven Douglas Steven Douglas They passed a sales tax hike last election to build a new police station at the Westborough intersection. It was a sly move because it was a small election that they figured few would vote in. The city politicos and their families all voted yes and then said things like “I shop in San Bruno anyway”. Thing is…..you buy a car anywhere and you pay the sales tax of your residence. No one said anything about that on Election Day.
I’m not here to judge whether we need a new police station. All I know is that the school bond got so mangled that the school district is $11 million in construction debt and they’re hoping to be bailed out by a dip into the general fund. Why would we want to give this gang more construction funds?
Cally Weise I dont know what will end up being worse, having to look at this ugly lot until they build over or, or the traffic around the area when its finally finished

Gabriella Trujillo Is this new shopping center even happening??

Renee Gomes That is so funny people are talking about this. Just last week I got a hold of the city to ask them when it was going to start and this representatives name was Billy gross emailed me and told me that they were going to start November 26, 2016 on phase 1 

Kenneth Buhagiar Rumor has it that Safeway is now reneging on their agreement to rebuild at that location – can anyone comment or verify?

Deras Senia There are so many other things to worry about than a eye sore lot. It’s funny how this lot bothers people

David De La Torre Lets talk about the real eyesore in the article. The author over used the word “blight.” lol

Randy Quok Isn’t there suppose to be condos there?

Georgeann Farrar Totally agree with you, why no fines for a dirt lot with NOTHING going on?

Georgeann Farrar They can still take the time to clean up the trash which can catch fire or cause a safety hazard. We as homeowners would get in trouble really quickly.

Annie McCann Get your shit together city. Forget the commercial. Think about the peeps who live here and call this home!!!

Leanne Gerardo Goff A real ghost town – so much potential !!!

Snoopy Alberdi Don’t need anymore housing. Need a beautiful library with a park, or an after school center to keep kids out of trouble!

Michele Lynn Tambini Totally agree with you all…we live right across the street and its a bit depressing driving by this every day. I know theres always the red tape issues and all that,but still….and not to mention that when it is all said and done and built our rent will double to triple because of the property value and tax, because those new condo/apartments they will build will cost close to 4,000 for a one bedroom

Tami Simontacchi Duff I’m getting tired ok looking at this nasty empty, weeds overgrown lot. Get moving and clean this mess up. There are people using it for their own garbage nastiness is all I got to say

Jeanne too many regulations and permits…that is why it takes too long.

Marcie Maffei This is when I want to say that the neighbors should just pick it up, put it in a truck and dump it in City Hall’s parking lot on Miller. We’ve become such a filthy area (whole Bay Area, not just this spot). Actually I find So. City cleaner than most, definitely cleaner than San Mateo where I live.

Sue Martin Take a look at Buri Buri Elementary……looks like the transformers live there….we need a town hall meeting to clean up our city

K.l. Hamilton Meanwhile, I”ve seen on at least two occasions that the SSFPD uses the building and back loading areas for SET or some other type of training. So my guess is that the developer is placating to the city, for more time. This blight will soon be a magnet for homeless during winter, and then who knows what will happen.

Thanks to Carol Turpin‎ for the update on the Centennial Shopping Center at Spruce/ECR: “I was at See’s Candies today and surprise, surprise! The fence around the new construction site on Spruce/El Camino has green tarps erected so we can no longer see the ugly empty lot. Kudos to all who posted negative comments. Someone heard and acted finally.”
Please note that our Fire Marshal Luis Da Silva worked with the owners/developers to see that this area was cleaned up and we thank him for the results – and to Carol for letting us all know.

Ray Bartolo writes “Drove by it today and It looks 100% better! Hopefully the construction will begin soon. Much credit and thanks to the Fire Marshal for taking action!”