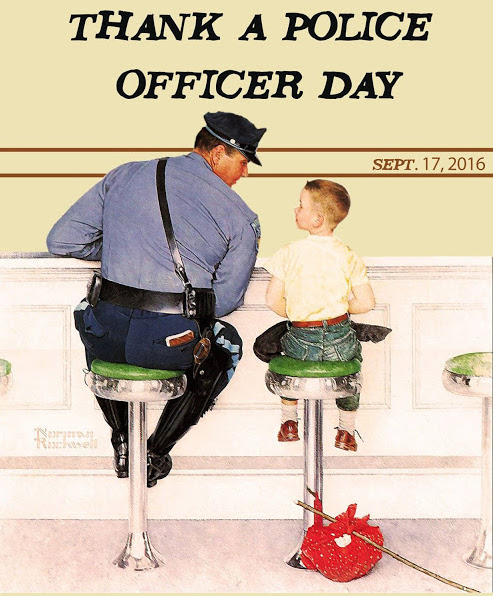 From San Jose California to Chicago Illinois cities have been hit hard by the breaking down of police departments due to a multitude of problems. Sometimes it can be easy to mimic rhetoric without thinking about the actual facts behind our own City and giving props where they are due.

And our Police Department has done an outstanding job as statistics show: SSF is safer than 61% of the cities in California AND 48% of the cities in the United States. AND our #SSFPD do more with less: ‘There are a total of 109 SSF police officers which results in 1.7 police officers per 1,000 residents which is 53.6% less than the California average and 48.7% less than the National average’ according to AreaVibes.

While the official THANK A COP DAY is Sept 17th we encourage everyone to feel free to thank our officers 364/24/7 because those are the hours they serve our community.

Everything South City will be sharing a post on our social media once a day leading up to #ThankAPoliceOfficerDay 9.17.2016 and we invite you to send your thoughts/stories/photos to us at news@EverythingSouthCIty.com so we can include them!

And yes, a GAME ON will be part of this #thankacop campaign, we are finalizing our prizes which we will announce next week. And while we recognize ESC is the voice of the community and we strive to always include everyone’s voice, this campaign will remain on the positive since there is so much good coming from our police that needs, and deserves, a wider audience.

Thank you for your contributions to this effort. And thank you to our officers for all that they do – stay safe!

[…] ways, that benefit us all. This month’s Thank A Cop Day was recognized on September 17th and we asked our readers to share some of their positive experiences they have encountered with our South City Police. A […]

I was working at Philz coffee, and an officer came into order his bagel & coffee. He made a quick run to Walgreens when his “break” was interrupted by a drug bust. His bagel went cold & his coffee went unattended in his patrol vehicle. After an hour of fulfilling his duty, he was ready to take his detainee to the department for processing. I ran out to him & handed him a fresh bagel because I didn’t want his money to go to waste & his stomach to stay empty. He gave a little laugh & thanked me. About a couple of hours later, as the coffee shop got busy, he walked over to my bar (me, unaware) and thanked me for what I had done. Through all the chaos of a drug bust, his service didn’t go unnoticed. He mentioned he told the guys in the department (SSFPD) & they had his same reaction….thankfulness. As a community, when you extend your hand to an officer, you shouldn’t expect anything in return as a reward or compensation. Just do it out of the goodness of your heart bc they willingly risk their lives every day for strangers. One small act can make their day!