NOTE: This article is re-broadcasted (CLICK HERE) from Genentech’s celebration of their 40 years, as they share a story a week highlighting their early beginnings and the great strides that have been made.

Once a week, when school lets out at Sunshine Garden Elementary in South San Francisco, a group of 50 students dash to board the yellow school bus to Gene Academy. By the time they reach the Genentech campus, they’re practically jumping out of their seats, eager to meet with mentors who help them with their homework, science projects, or whatever else they need, which is often just having someone else take the time to listen to them.

Gene Academy, which opened in 2008, was the brainchild of former Genentech employee John Orwin, who wanted to start a tutoring program for low-income students, and thought it was an opportunity for the company to give back to the local community. At the time, our school needed additional resources to help students who were having academic difficulties. Many of our kids especially need extra attention because they’re learning English as a second or even third language—as are their parents, who can’t help them as much as they’d like.

At first, we paired the students who were struggling the most academically with mentors at Gene Academy. Now, we also nominate students for the program for other reasons, such as if they’re shy and need more social interaction in small groups, or they’re doing well academically but need more of a challenge, especially in the sciences.

Gene Academy started off with 24 students from our school and a handful of mentors. Over the years, the program has grown to include more schools and volunteers—this year, we have 170 students enrolled and 340 employee mentors—and it focuses more on teaching science. Half the time at Gene Academy, which meets in a large cafeteria, is dedicated to homework, and half to hands-on science projects. The students have one or two mentors who meet with them for up to three years, developing great reciprocal relationships over time. 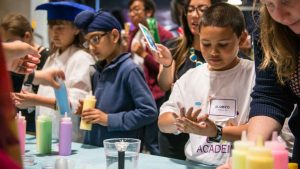 It’s interesting to watch the mentors, because when they don’t know an answer, they end up modeling great strategies for solving problems the way they do in their jobs—Googling things, reframing the problem and asking for help from others. The students don’t just learn the answers, but the whole process of problem solving, understanding that you have to be creative and use all your resources to find an answer.

Sometimes the kids even end up teaching the mentors, who didn’t learn math the way we teach it today—they grew up “borrowing” when they solved subtraction problems, for instance, when today we talk about “place value,” “regrouping” and “unbundling numbers.” So we sometimes have fifth graders teaching Genentech scientists about math! That’s wonderful, since the ultimate form of learning is being able to teach that concept to someone else.

Going to Genentech also gives these students a chance to see what it’s like where some adults work, what varieties of jobs they do and how they interact with each other.

Science days are the kids’ favorite days, when they engage in hands-on projects, learning how to ask questions, investigate and find answers by studying science in the real world. We classroom teachers try to incorporate as much science as we can into our days, but we don’t always have the time or resources for as many active investigations as we’d like. At Gene Academy the kids participate in all kinds of science projects—extracting DNA from a strawberry, testing different taste zones on their tongues, launching water-filled medical gloves to learn about projectile motion and velocity, learning how a “disease” spreads using colored water, and playing with dry ice, exploding bubbles and bouncing glue. These projects are fun, but also critical for comprehending science by making real-world connections. And the students get totally turned on to learning about science, which carries over when they’re back in our classrooms. 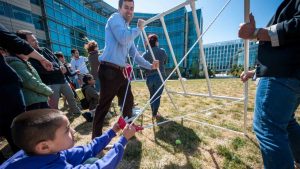 Mentors and students launch water-filled medical gloves to learn about projectile motion and velocity.
Photo from the Genentech archives.

Gene Academy doesn’t just help students academically; it helps socially as well. I had a really shy, bright third grader whose teacher nominated him for the Academy to give him more one-on-one time, a chance to interact in a situation where 23 other kids weren’t looking at him. By the time he got to fifth grade, he was outgoing, solving problems, asking questions and participating in class—which was partly due to the relationship he built with his mentor. Another student didn’t speak any English when he started at Gene Academy, and he just blossomed with the added support—he was able to communicate well and his self-confidence shot through the roof. Now he’s in 8th grade and recently wrote me a note telling me how much he misses Gene Academy.

Going to Genentech also gives these students a chance to see what it’s like where some adults work, what varieties of jobs they do and how they interact with each other. It’s an opportunity for them to engage with adults other than their parents, family members or people they may see when they’re out at stores. This opens up the world to them and helps them visualize what it might be like for them when they are adults in the workforce.

I have students who used to be afraid of science and are now completely engaged and just want to learn more. Their excitement is palpable from the moment they get off that bus at Genentech. Gene Academy inspires the kids and gives them invaluable tools for their future.

As a teacher, obviously I’m excited by the opportunities offered by this unique program. So I went straight to the source and asked two students about their experiences at Gene Academy, which they shared below:

YSABELLA GRIARTE CORTES
Ysabella is a 10-year-old from Sunshine Elementary who is going into fifth grade and has participated in Gene Academy for two years.

“I liked every part of Gene Academy. We made a windmill, a compass, a buzz noisemaker and a little car out of cardboard. My favorite part of the day was when we got to build science projects because I really liked the creativity. I had two mentors. It was very nice to have someone by my side to help me with my homework and the projects we were doing. Going to Gene Academy inspired me because I didn’t really like science before and I learned to enjoy science a lot. I might want to be a scientist who studies chemicals.”

RYAN SAAVEDRA
Ryan is an 11-year-old who is going into sixth grade and attended Gene Academy for three years.

“I liked Science Day and working with my mentors and friends. We got to make a lot of projects and bring them home—a bridge made of sticks, a windmill that could lift a basket of rocks, a fizzy bottle that launched into the air, and my favorite one was a solar-powered jitterbug that moves in the sun. We also built a DNA model out of beads, which is your life system, and the thing that is cool about DNA is that it has so many molecules.

Going to Genentech was fun, and the Campus Tour was awesome. They had a Walt Disney room where you could think about and put together your ideas to solve a problem. The room would change colors while you’re solving problems. We also got to see a video about how robots help make medicines. I wasn’t interested in science before Gene Academy, but now I like it. I want to be an engineer in coding.”

40 years ago GENENTECH started an experiment that gave rise to an industry. Each week throughout the year they will share some of the moments that have defined their journey so far.  To read all the moments in time please CLICK HERE

← Genentech & SSFUSD Break Ground Of First & Only Biotech Facility At SSFHS
A Beautiful Day in the Neighborhood: Neighbors Share Photos of South City →