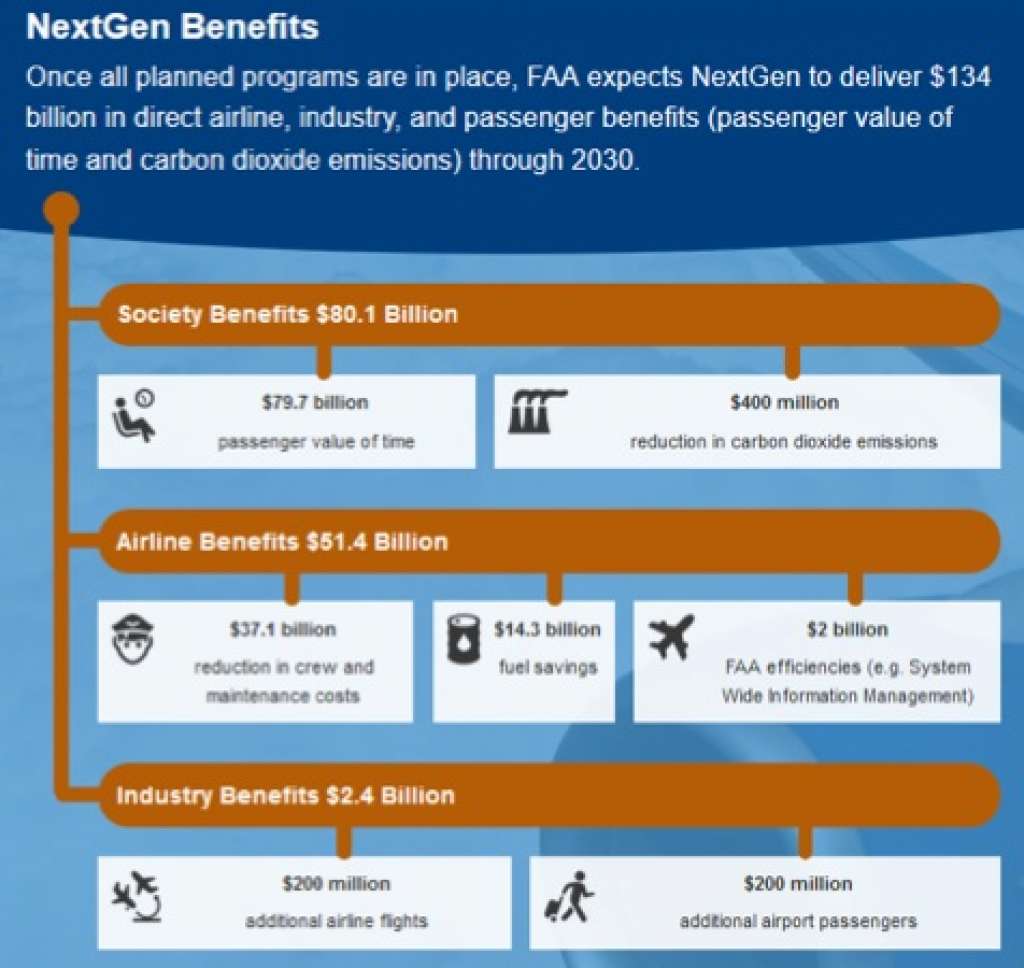 The FAA touts the financial benefits of the NextGen navigation system on its website. It doesn’t mention the effects of increased noise pollution caused by concentrating flight paths.
SOURCE SF GATE

The sound of roaring jets has become a frequent backdrop to the lives of many South SF and Peninsula residents, thanks to the FAA’s new “NextGen” flight procedures, which were implemented at SFO in the spring of 2015.

Under NextGen, satellite-based GPS (vs. the older radar) is used to route planes, and flight paths are “optimized”, in that the landing and takeoff paths are lower and more direct, and airport capacity is increased since the satellite navigation allows for planes to be bunched up more closely in their arrival or departure paths.

However, the net effect of NextGen for many on the ground is a significant increase in noise pollution:  flight paths into and out of SFO are both lower and less dispersed than they used to be, so the resultant jet plane noise is both louder and more frequent for those luckless folks who happen to live under one of these concentrated zones.

Rachel Kellerman, a Palo Alto resident writing for Palo Alto’s online news in August this year, sums up the situation nicely:  “These [NextGen] procedures concentrate flight routes into narrow pathways at low altitudes, resulting in sacrificial noise corridors.   The FAA claims that these changes resulted in ‘net noise reduction,’ which is ironic given that complaints to SFO went from 449 in June 2014 to 320,000 in June 2016.”

Although NextGen is beneficial for the airlines (shortened flight paths, less holding pattern time) and for SFO (greater capacity = more $), it has a clear negative impact on quality of life of those of us under these flight paths—yet Glen Martin, the FAA’s Regional Administrator for the Western-Pacific Region, has stated (in response to a question about the FAA’s noise abatement oversight), “”We don’t design [flight paths] to reduce noise.”

The FAA’s primary mission is to ensure safety and efficiency—which of course we all want—but there also needs to be acknowledgement of how repeated intrusive jet noise affects those communities around the airport, and there must be responsible action towards ensuring quality of life for people in the communities surrounding the airport.

There are several citizen advocacy groups trying to make noise pollution more of a consideration in the design of flight paths, and they are working with elected officials and the FAA to come up with solutions to the NextGen-induced noise issues.

Two of  those groups, Sky Posse Palo Alto and Quiet Skies Mid-Peninsula, have been exceptionally active in the hunt for solutions, and have been working with technical consultants to research and propose alternate flight paths that are less disruptive to the affected communities.

One key group that Sky Posse, Quiet Skies, and other organizations are working with is the Select Committee on South Bay Arrivals, which (see Congresswoman Anna Eshoo’s press release) is made up of 12 local elected officials (contact info here) and “will build on the previous work of local stakeholders to develop regional solutions to address aircraft noise.   SFO and the FAA….will work with both the Committee and the SFO Roundtable on the FAA’s [NextGen] Initiative.”
Mayor Mark Addiego is SSF’s representative for the Select Committee, and as such is charged with making recommendations to the FAA on how they can address the aircraft noise issue.  Please email him, as well as our Congresswoman Jackie Speier, and let them know how you feel about the jet noise in your neighborhood!
Our elected officials need to know that their constituents care deeply about finding a solution that addresses the dramatic increase in airplane noise over SSF and other regions of the Peninsula.

Congresswoman Speier’s online contact form is at:  https://speier.house.gov/contact
Below is a sample email that outlines the basic issues and includes 3 bullet points that represent the broad recommendations of Sky Posse/Quiet Skies (detailed recommendations can be found here).

If you decide to write in, and you can add in personal experience of how your conversations, reading, studying, sleep, TV time, or whatever have been interrupted by incessant airplane noise, all the better.

We really need to bring home the point that the increased airline noise is very disruptive to many, many facets of our daily lives, including our health and well-being!

To report jet noise and file a noise complaint, you can go directly to SFO’s website, but a much quicker and easier way to report is to use the web-based tool at stop.jetnoise.net (information here).   Stop.jetnoise.net directly funnels your complaint to SFO, but is much easier to use, and provides the advocacy groups with a useful tool in showing how much the Peninsula has been affected by NextGen flight path changes.

Reporting noise complaints through any portal (including directly via SFO) requires an email address and a home address or current location, and you can use your Facebook or Google account to sign into stop.jetnoise.net to avoid having to fill in those details with every complaint.

“Report aircraft noise using stop.jetnoise.net. Do it at least once a day (100 people complaining is way more powerful than 1 person complaining 100 times). The complaints data matter.”

Here’s a sample of the stop.jetnoise.net interface reporting:  when possible, it identifies the flight causing the noise and gives information on speed and height relative to your position—as you can see from the few reports I logged on Oct 15 while writing this little article, planes are very frequently flying below 2000 feet in my Sign Hill neighborhood. 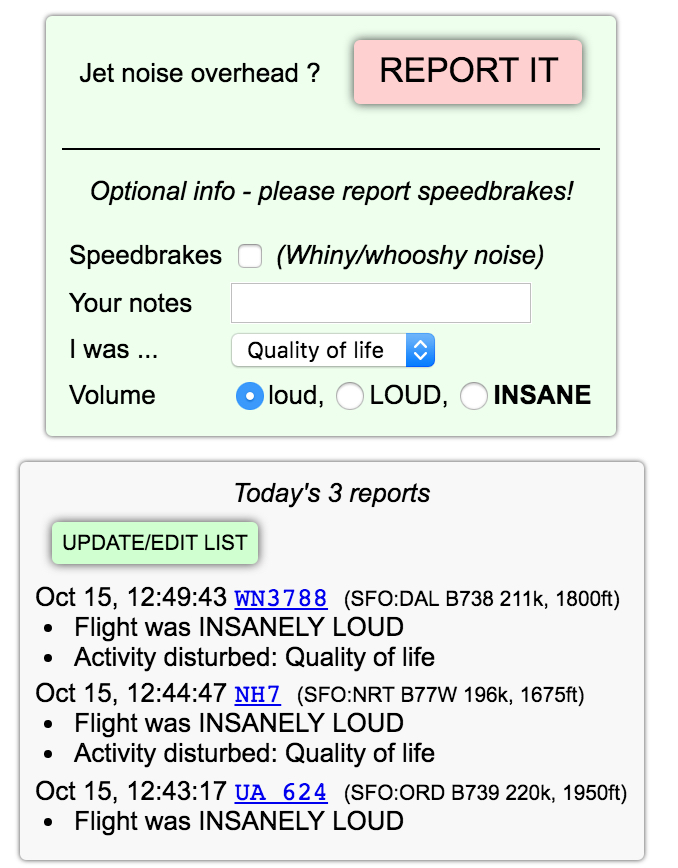 Please add your voices to speak up to our elected officials and to SFO and let them know that we need a prompt and equitable solution to the jet noise issue—only by working together can we have any hope of a successful resolution! Be sure to include Congresswoman Jackie Speier in your communications – she can be reached CLICK HERE

As a resident of South SF, I am writing to urge you to speak up for SSF and for all Peninsula communities that have been so adversely affected by the increase in airplane noise since the implementation of NextGen flight paths, which allow airplanes to fly lower and louder, and concentrate aircraft noise in narrow “superhighways” in the sky.

I believe that the aircraft noise should be eliminated as much as possible and that any remaining noise should be dispersed in an equitable fashion so that everyone who benefits from the airport shares in the noise cost.

Several community groups have put forth proposals that could, if adopted by the FAA, provide both short- and long-term noise relief for communities on the ground while maintaining safe practices in the air. These include:

Please make your consituents’ voices heard, and urge the FAA to promptly investigate—and promptly act upon–the possible solutions offered by Sky Posse and Quiet Skies, so that SSF residents’ quality of life is not further degraded by the incessant airplane noise!

We are relying on you to make our concerns known to the FAA, and to help find an equitable solution for all Peninsula residents—

ESC NOTES THE JUNE 2, 2016 SF GATE ARTICLE BY MIKE MOFFITT ON THIS SUBJECT AS IT RELATES TO PACIFICA – WE ENCOURAGE OUR READERS TO CHECK THIS OUT HERE BE SURE TO SCROLL THROUGH THE PHOTOS & READ CAPTIONS FOR MORE GREAT INFORMATION

*229 FLIGHTS OVER PACIFICA EACH DAY

*FAA information that came to light for the first time last month revealed that about one of every six planes flying over the city is coming from Oakland International, said Dan Stegnick of the noise advisory group. The Oakland planes fly even lower than SFO jets and closer to SFO than many of OAK’s own flights, even though they are supposed to be giving SFO a wide berth.

*Some of the suggestions that have been deemed feasible and earmarked for further study are: