This is the third of four articles on “A Centennial Is Being Celebrated”. The first article (CLICK HERE) dealt with the forming of the South San Francisco Italian American Citizens Club on December 7th, 1916 and the festivities that would be celebrated this year. The second article (CLICK HERE) focused on the hardships and the prejudices suffered by Italians, not only throughout the country, but also here in our immediate Bay Area cities. 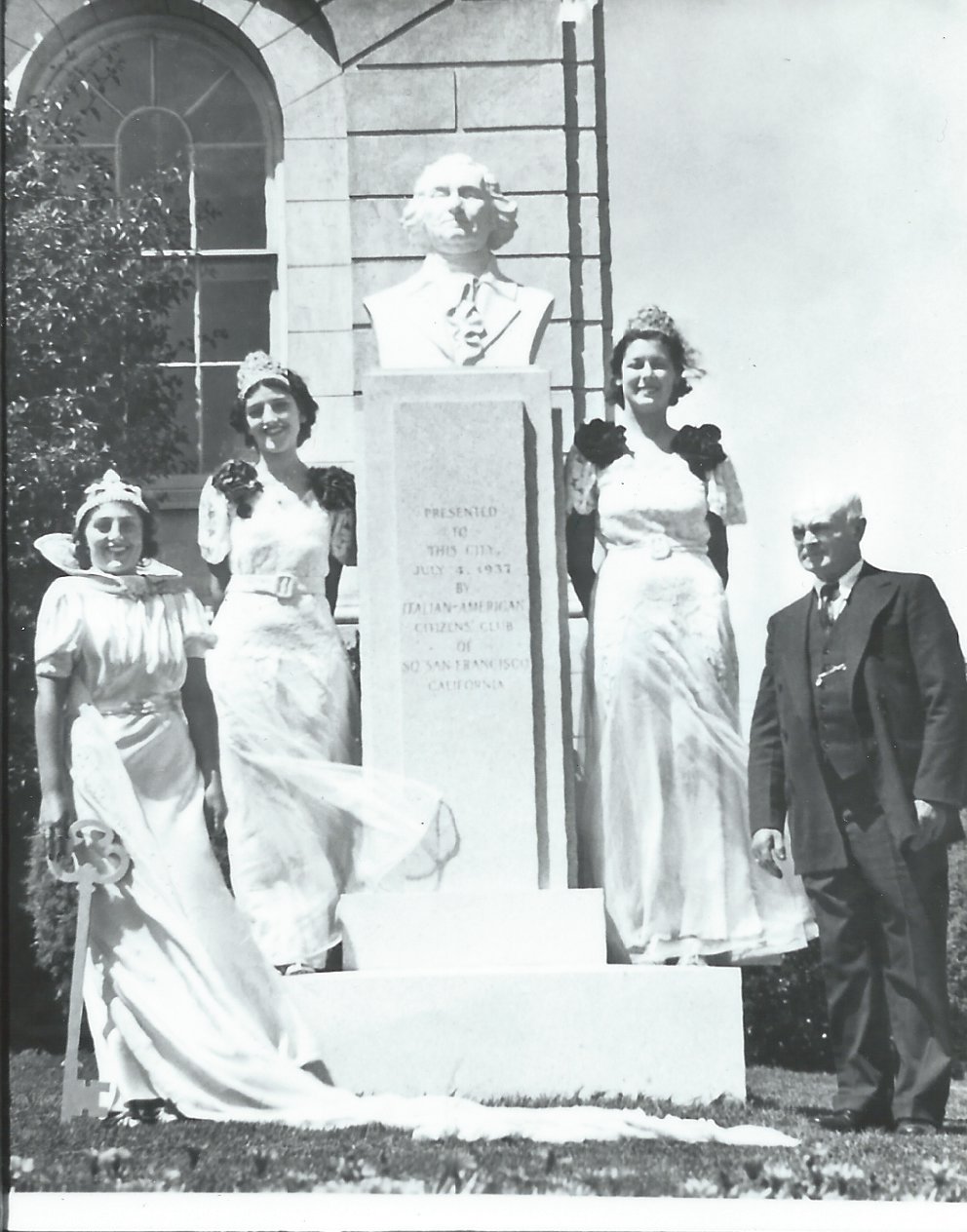 IACC On July 4, 1937 the IACC dedicated the George Washington statue on the City Hall Lawn. A rededicated is set for Oct 23, 2016 on the steps of the City Hall

During the first few years of the 1900’s, very few of the early immigrants became citizens.  Their main priorities were finding and maintaining a job, providing for their families and eventually the hope to return to visit their love ones in the “old country”. For Italians in South San Francisco there was no full time employment or benefits, only part-time work. Because of this situation, the benevolent organization “Societa di Mutuo e Soccorso” was formed. Every working Italian contributed a few cents from their monthly paycheck. If they became ill or lost their jobs, the organization would see them through that difficult period. Once regaining employment, they would repay the money to the organization. As with all immigrants, the few that had some education and were aggressive, sought ways for a better life. They realized the importance of speaking English and becoming citizens. English classes were provided in homes which helped many Italians become citizens. By December of 1916 there were enough people to form the Italian American Citizens Club. It became a political club that dealt with the everyday problems confronting the community. Coming from a poor country under one ruler, a King, and the beginning of the rise of fascism and Mussolini, the IACC was formed with one important basic principle – no one person would rule and the membership would vote on all items. The President would conduct the meetings; members of the board would chair the committees, which were formed for various events and interests of the club. The committees would report back to the membership to vote for approval or disapproval. This was their way of forming a true active and democratic organization.

A second priority of the IACC was to try and unify all the Italian organizations in San Mateo County. Instead of confronting prejudice and racial slurs with protests and marches, they would endorse candidates that were supportive of Italian communities. When parades or festivities were organized, other ethnic groups, celebrities and political individuals from throughout the county were invited to attend. This was so successful that eventually candidates from near-by cities would also appear for endorsements. Politics became the main focus of the IACC and in June of 1935 a new bylaw was accepted by the membership. “No member of the club that is an elected public official can have an official position in the club due to conflict of interest”. In the mid-30s, the IACC also became known and respected beyond the confines of San Mateo County. State Representatives of the Republican and Democratic parties sought endorsement for Presidential Candidate Alfred Smith, and later for Presidential candidates Herbert Hoover and F.D. Roosevelt. In 1931, the first Italian American became a candidate for the local school board, and in 1932 the first Italian American was a candidate for the So. San Francisco City Council.

In the 1930’s some successful local projects the IACC was involved in were the building of wooden sidewalks on Linden Avenue to the San Bruno border (the streets were not asphalted at the time) and the political support in the building of a “Dog Race Track”, across from Orange Avenue park (which is currently Mayfair Village). Later the IACC fought and succeeded in forcing the Kennel organization in giving $250.00 to the city of South San Francisco each night that the races were on, including an agreed percentage of workers to be residents of South San Francisco.  The IACC stopped the Supervisors of San Mateo County from moving the local Court House to Redwood City. They also supported a one cent increase in the local gasoline tax for bettering the roads, and demanded the cleaning, painting, and up-grading of the Baden Elementary School, where the majority of the Italian American community’s children were in attendance. On February 19th, 1937, the IACC unified all the Italian organizations in San Mateo County in protesting against Judge Johnson of San Carlos and against the San Carlos Bulletin for slurs against the Italians. The club then led a successful recall election.

Finally, on March 11, 1937, the “Festa” Committee made their report on a sculptural project and where it would be placed. It was agreed to be placed on the front lawn of the South San Francisco City Hall.  It would be a monument depicting the bust of the first President of the United States, George Washington, whose great-grandfather emigrated from England. By a show of hands the membership voted unanimously to support the project. On July 4th, 1937, with a parade, a Queen, representation from throughout the Bay Area and with floats and musical marching bands, the statue was presented to the city of South San Francisco.  Since its presentation the statue has continued to represent the past and current history of the Italian community of our city.

With the beginning of World War II, approximately 1019 young men and women from South San Francisco entered the military; 336 were local Italian American children of Italians that sought a just recognition of their efforts in becoming accepted as Americans.  Eleven of these paid the maximum price; their life, and one became the first United States Navel hero to return from the Pacific battle of the Coral Sea.

Our final article will deal with the history of the South San Francisco Italian American Citizens Club, beginning after World War II through 2016, where it is celebrating its 100th Anniversary.

[…] not only throughout the country, but also here in our immediate Bay Area cities. The third article (CLICK HERE) shared how the Italian Americans continued helping each other to become active citizens in their […]