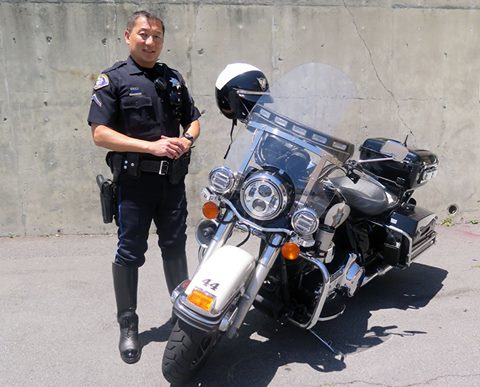 Officer Chon has been an officer for the South San Francisco Police Department since 2004. He is currently working as Traffic Motor Officer and also part of the North Central SWAT Team. Don’t remind his Sergeant about the SWAT thing as he wants 100% of Officer Chon’s time in the Traffic Department, not 95%. Officer Chon is fluent in Korean.

Officer Chon became a Police Officer because he had seen strangers, friends, and family members become victims of crimes, including himself. Officer Chon thought he should do something about it so he can put bad guys in jail. Unfortunately, family pressure kept him from being an officer right away. Officer Chon finished college then worked in banking and high tech companies for many years. One day, Officer Chon’s father passed away due to an accident, and after some time, he thought to himself that life is too short not to pursue his dreams and made up his mind to get into law enforcement. Officer Chon enrolled himself to the Police Academy and was hired by SSFPD when he graduated.

As a Motor Officer, Officer Chon’s primary job is enforcing traffic laws, which includes issuing citations and investigating accidental collisions. In case you didn’t know, that is why Motor Officers issue more traffic citations. Officer Chon has heard every excuses and every derogatory words in the dictionary from people he pulls over. Many people tell him to go arrest murderers instead of wasting time issuing citations. Well, the number of deaths from traffic collisions have steadily dropped, but it is still too high (much higher than homicides). Frankly speaking, being out on the streets and issuing citations causes people to behave.

Officer Chon feels he is making the community a better place to live whether it is issuing citations for infractions, investigating crimes, or arresting suspects for committing crimes. There is nothing more rewarding than to see someone thankful for what he did.

Officer Chon was brutally assaulted on Thanksgiving Day while on duty in the downtown area. He has sustained major head trauma and is in critical condition at this time. More can be found HERE. A GoFundMe has been set up by fellow officers to help the Chon family which can be found HERE. Please keep Officer Chon, his family and all our law enforcement officers in your thoughts & prayers.

The suspect has been arrested and is currently being held without bail in the SMC jail.