Pacifica Tribune writer (and former Peninsula Progress writer) Jean Bartlett recently completed a book for Holy Cross Catholic Cemetery in Colma, called “Roll Call ~ Reveille.” It tells the individual stories of 55 people, now at rest at Holy Cross, who served in wars dating back to the U.S.-Mexican War, and on through the Civil War, the Spanish-American War, WWI and WWII. (She will be writing a book in 2017 for Holy Cross featuring some of their residents who served in wars following WWII.) While Holy Cross is not a military cemetery, there are more than 370,000 people buried there and without a doubt thousands of those individuals served.

A few featured in the book are particularly well known – Joe DiMaggio immediately comes to mind. And some might be particularly well known in South City and San Bruno – Tom Lara and Leslie Brooks, the latter was married to the South City born and raised Mae Lopresti. But most of these people were selected randomly by walks through the cemetery, Internet searches, and sometimes because people heard she was writing this book and asked if she could write about someone in their family. In each story, her goal was to tell that person’s tale in a way that if they could come back from the grave, they would read it and say: “That’s me alright!”

This was a massive research project. Many of the individual stories took the author 40 hours or more of research which included: pouring through old newspapers, old books, decedent files, volumes of information on the Internet, and in a number of the more current stories, interviews with family members. This was all done so that this person, who once braved the storms of battle for the greater good, could be remembered by all the things that make a life: who their parents were, where they were born, who they married if they lived past their days of war which most did, what they did for a living, where they lived in the Bay Area and/or grew up in the Bay Area, and on and on. In addition, the author takes each story into the places where the individual served. Readers will travel to many battlegrounds including: Milliken’s Bend, Vicksburg, Spotsylvania, Manila, Saint-Mihiel, Belleau Wood, the Solomon Islands, the China-Burma-India Theater, Guadalcanal and Iwo Jima. It is a book of both history and the Bay Area community.

Attached is a flyer of four immediate upcoming book signings. The first one is at Holy Cross in Colma on Veterans Day, Friday, November 11 following a Veterans Day service which begins at 11 a.m. The second is also at Holy Cross on Saturday, November 12, the third is at the Little Brown Church in Pacifica, Friday night, November 18, and the fourth is at Sam’s Castle in Pacifica, Sunday afternoon, November 20. All the times are mentioned on the flyer. For those wishing to purchase a book it can also be done by mail. Book is $30 plus a mailing fee of $5, for a total of $35. Check can be made out to Holy Cross Catholic Cemetery – Colma, and in the memo section write “Jean Bartlett – Roll Call.” Mail check to:

Note, if you would like it signed, just write a note and the author will sign it! 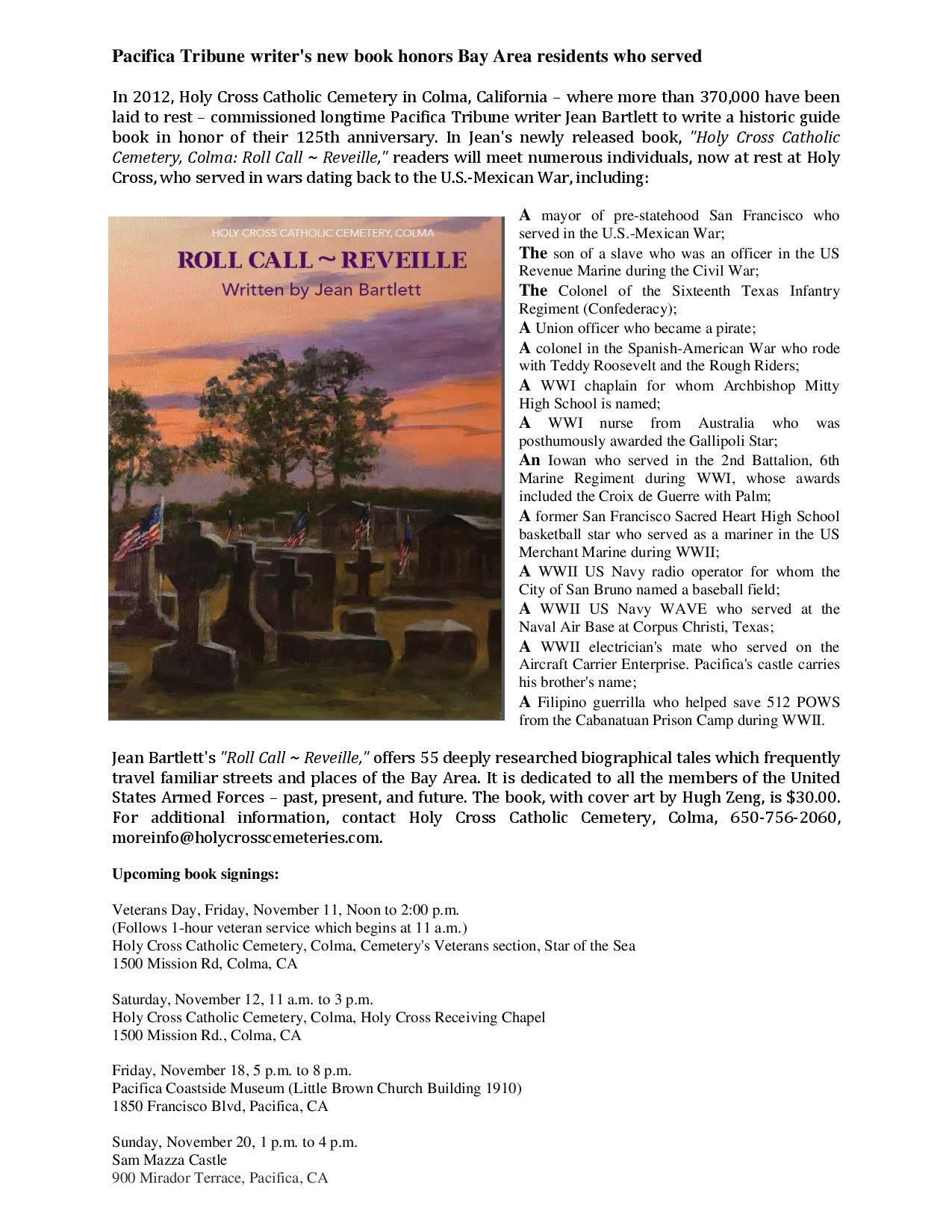