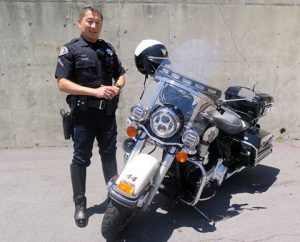 This release is to inform that there has not been any change in Officer Robby Chon’s medical condition. He remains in critical condition in the Intensive Care Unit at this time. An updated press release will be sent out with any significant changes as they arise.

South San Francisco Police Officer Robby Chon was brutally assaulted on Thanksgiving Day while on duty responding to a call on Grand Avenue SSF. Below is the media release from our SSFPD November 24, 2016. Everything South City will continue to share updates as they become available.

At approximately 2:20 p.m., an on-duty South San Francisco Police Officer was waved down by a citizen reporting a subject causing a disturbance at a local business on the 300 block of Grand Avenue.

As a result of the assault, the Officer sustained a major head injury and was taken to a local trauma center for treatment. The officer is currently in surgery and is in critical condition. The investigation is on-going.

City officials were notified of this incident, prompting Mayor Mark Addiego to share, “This is so disheartening to hear of this incident, in a City such as South San Francisco. We are a tight-knit community, with a police force that is our family. Our thoughts and prayers are with this officer and his family.”