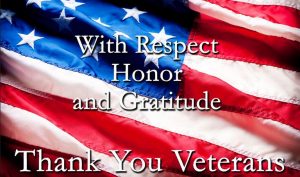 In the wake of a national political campaign that has stirred the emotions of so many Americans, City Leaders and Staff of South San Francisco want to take the time to thank all veterans for their service and their sacrifices.

“Today is a day for Americans to set aside their differences, unite and pay tribute to all those who have served their country in times of war and peace,” says Mayor Mark Addiego. “Millions of Americans have sacrificed much to help protect us and many more whom have paid the ultimate price.”

On the 11th hour of the 11th day of the 11th month of 1918, an armistice, or temporary cessation of hostilities, was declared in the First World War, then known as “the Great War.” Commemorated as Armistice Day beginning the following year, November 11th became a legal federal holiday in the United States in 1938. The day’s observation included parades and public gatherings, as well as a brief pause in business activities at 11 a.m. In the aftermath of World War II and the Korean War, Armistice Day became Veterans Day, a holiday dedicated to American veterans of all wars.

In the United States, an official wreath-laying ceremony is held each Veterans Day at the Tomb of the Unknowns in Arlington National Cemetery, while parades and other celebrations are held in states around the country. Veterans Day pays tribute to all American veterans – living or dead – but especially gives thanks to living veterans who served their country honorably during war or peacetime.

Locally, the Golden Gate National Cemetery in San Bruno is having a ceremony presented by the Avenue of Flags Committee, which will be at the rostrum area near the hill with the large flag. The Band Preclude starts at 10:30 a.m. and the program officially begins at 11:00 a.m.

“To all Veterans, you have made not only South San Francisco and California proud, but the whole of our great nation,” adds City Manager Mike Futrell. “We thank you for serving with valor and without hesitation to preserve the integrity of our freedoms.”