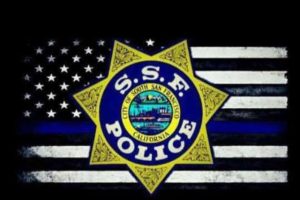 South San Francisco Police held a press conference at noon giving an update on the officer’s condition. A gofundme has also been set up by other officers as we find ways to give support to Officer & his family.

SOUTH SAN FRANCISCO — Officials say a police officer assaulted Thursday afternoon in South San Francisco remains in serious condition this morning after being struck in the head with a skateboard.

The suspect in the assault, identified as Luis Alberto Ramos-Coreas, 28, of South San Francisco, was arrested on suspicion of attempted murder, assault with a deadly weapon, resisting arrest and battery on a peace officer, according to the South San Francisco Police Department. Witnesses say Ramos-Coreas became violent and irrational after a short foot chase, turning on the officer and eventually striking him in the head with a skateboard.

At approximately 2:20 p.m. a citizen waved down an officer about a disturbance at a business in the 300 block of Grand Avenue.

Police said the officer tried to approach the suspect creating the disturbance, but the suspect refused to comply.

The officer requested additional police assistance, and as a second officer arrived at the scene, the suspect fled on a skateboard.

The officer, who has not been identified, was knocked unconscious. The officer suffered a major head injury and was transported to the hospital in critical condition.

Police Chief Jeff Azzopardi says the officer, a 12 year veteran of the police force, had emergency surgery and is currently in critical condition.

Azzopardi also revealed that the officer is married and has two children.

Ramos-Coreas remains in the San Mateo Jail and has a lengthy history of contact with the South San Francisco police department including several incidents of violence.

He awaits numerous felony charges, including attempted murder of a police officer.

“Law enforcement is going through difficult times, with unprovoked targeted attack on police officers,” said Azzopardi. “Yesterday this hit home here in South San Francisco. This attack is not acceptable. The men and women of the South San Francisco police department will remain vigilant in our efforts to keep our officers and our community safe.”

The identity of the officer is not being released at this time and witnesses, or persons with information are encouraged to call the South San Francisco Police Department at 650-877-8900.

UPDATE – gofundme:Many of you know the officer involved in this situation. I removed his name because it has not been officially released. Out of respect to him, his family, and the South San Francisco Police Department, his name is omitted at this time. 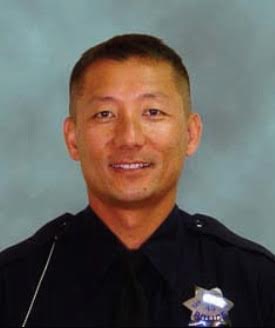 SSFPD have released this photo of Officer Robbie Chon

If you’re reading this, you already know who I am and what I’m about. But, if you don’t know me, my name is Chris Swinney. I’m a deputy sheriff with the San Mateo County Sheriff’s Office with a soft spot for the men and women in blue. These gofundme accounts are happening far too much across our great country, but this one hit me right in the gut and knocked the wind out of me. I’ve been compelled, along with others,to take immediate action.

My academy mate and friend, SSFPD OFFICER, was attacked in South San Francisco yesterday. ** was struck in the head with a skateboard and as a result, he’s in intensive care. It’s too early to know what the outcome of this tragic event will be, but I know we can help him and his family through this terrible ordeal if we work together and show our support. Obviously, as I receive updates of his condition, I will share them with all of you.

Whatever money raised will go directly, in it’s entirety, to ** and his wonderful family. The money will be used to help off-set any medical costs or unexpected bills that will pop up during this difficult time. OFFICER is the kind of man who’d give you the shirt off his back, it’s time we return the favor.

OFFICER doesn’t know this because I never shared it with him, but he was one of the few guys who insipired me at the police academy. Without him, I might not have finished. He would run our PT (physical training) and often did his famous, “OFFICER Kickers.” That excercise kicked my butt, but it was well worth it. His view and take on life, with friends, family, and complete strangers, has always been top-notch and pleasant. His career has been example of what it means to be a “go to” officer, leader, and teammate. Raising any amount of money for OFFICER and his family won’t make things entirely right again in the short-term, but it would help.

I feel a great sense of pain and sadness knowing he’s fighting for his life in a hospital right now, but I will not quit on him now, or ever. OFFICER would not be happy that I started this gofundme thing, it’s not the type of thing he would like because he’s the most unselfish person you’d ever meet. But, he’s the kind of guy you can’t help but want to help, and he needs our help now.

Please consider donating to this cause for SSFPD Officer OFFICER and his family. The entire law enforcement community would be grateful for any support you can show his way.