Steve Jobs said, ” It was beautiful, historical, artistically subtle in a way that science can’t capture, and I found it fascinating.” Former White House Chief Calligrapher Rick Paulus will bring a sample of ‘IT” –calligraphy with his pointed pen expertise Spencerian script to South San Francisco known world wide for its science—biotech and cutting-edge technology research. Rick Paulus had penned the names of every visiting Head of States , Royalties for state dinners and citizens worthy of commendation and awards given by the President while Paulus was in the White House.

The proceeds of the Spencerian workshop will benefit the host, SSF Friends of Parks and Recreation which creates fun activities for children as well as adults. When asked to do this workshop , Paulus had no hesitation accepting the task, “I am excited to be teaching workshops with South SF Parks and Recreation!   Though he looks quiet and shy, he is funny and friendly when you get to know him.

Paulus Spencerian workshop will be held at Joseph Fernekes Bldg at Orange Memorail Park on January 22,2017. It is listed on this link CLICK HERE and informational flyer is below. Cost of the full day workshop is only $100.

The workshop not only raises funds but also participants get to learn a new skill and the community is reminded of American History. Penmen used pointed pens to hand calligraphed the contents on parchment papers known today as the Declaration of Independence (Timothy Matlack), the Consitution (Jacob Shallus ), and Bill of Rights (William Lambert). These three documents are considered National Treasures. Placed in hightly secured vaults, they are monitored with correct temperature and humidity to prevent deterioration more than any art or historical pieces.
Here are three links of these penmen:
Who wrote the Declaration of Independence
Man Behind Quill Jacob Shallus
Book builder

Westen Calligraphy is usually written on broad-edge nib (Italic, Roman Caps, Uncials, Blackletter, Foundational, Rustic,etc) and pointed nib (Copperplate, Engrosser Script, Spencerian)
Inspired by the rhythm in nature, Platt Rogers Spencer created Spencerian in 1840 when he saw poor penmanship during his lifetime Spencerian script was used in business schools as well as in celebratory events until the typewriter came along. Billions around the world had seen this popular script even though people are unaware of Spencerian. Coca-Cola logo bears the skeletal form of the script.
To see Calligraphy at the White House featuring two Ricks: Muffler and Paulus – CLICK HERE.

Thanks to Director of Parks and Recreation, Sharon Ranals, and to Greg Mediati, Recreation Manager,  and Susan Filereto, Administrative Assistant who have been assisting workshop coordinator Elizabeth Nisperos to make this fundraiser possible.
The author recommends reading “The President’s Table: Two Hundred Years of Dining and Diplomacy” for a comprehensive look of calligraphy works at the White House. CLICK HERE for Amazon link. 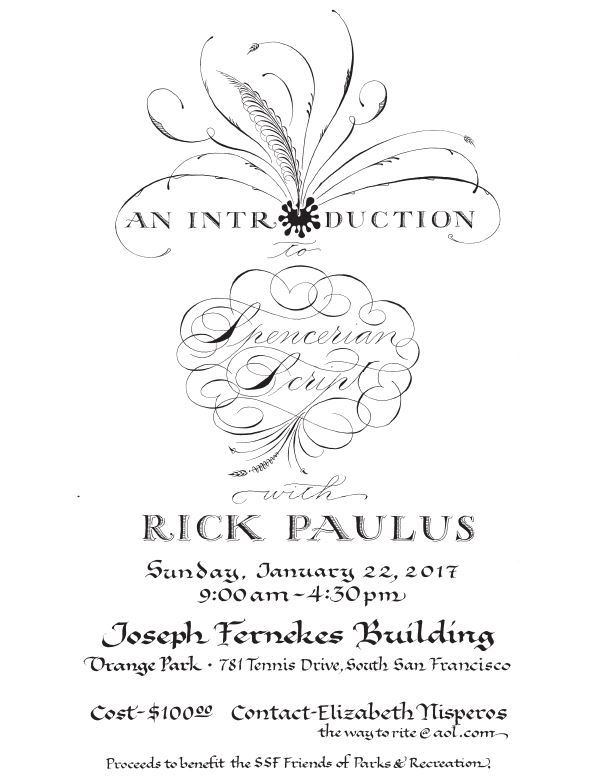