As of December 21, 2016 at 11:00 A.M., South San Francisco Police Officer Robby Chon remains in “stable” condition and he was released from the hospital, after being  assaulted  on Thanksgiving  Day.  Officer Chon was able to return to his home where he will continue with intense and continual rehabilitation. Doctors and therapists continue to remain optimistic regarding  his progress.  Officer  Chon’s family  and the South San Francisco Police Department remain grateful for all the support received  over the  last month. All the support, thoughts, and prayers  are truly  inspiring  to Officer  Chon as he continues  his  fight to recover from this tragedy. He is very thankful  to  be home  for Christmas  and the  support  from the community has helped  make it  possible.

EDITORS NOTE: Everything South City announced last month during the candlelight vigil in support of Officer Robby Chon, blue porch lights would be available to those who attended the vigil and to those who wish to show their support for Officer Chon’s continued recovery and that of our police department. Everything South City has partnered with Nick Tentes of Grand Avenue Hardware to purchase 200 bulbs to gift to those in our community.  These 25 watt bulbs may be picked up at Grand Avenue Hardward 306 Grand Avenue or at our police department at 33 Arroyo Drive while supplies last. 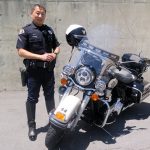 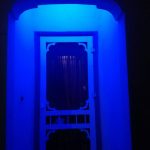 “Front porch light is now blue in honor of officer chon and as a show of solidarity to all the ssfpd officers and our nation’s officer protecting us as we sleep at night.” writes SSF neighbor Davida Dean while sharing her photo