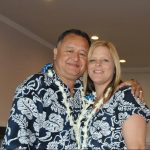 As we are always interested in new businesses coming to South San Francisco, we were delighted to learn a Hawaiian Food Truck has been added to the other options serving those in our City. We’ve enjoyed many food trucks specializing in Mexican cuisine and Asian delights and Chuck’s Island Grill adds another dimension to the great food offerings found here.

Although he was a young boy when he arrived on the mainland, Chuck had a lifelong dream of one day serving up his favorite foods to appreciative crowds. After retiring from a 38 year career at Stanford the time seemed right for Chuck and his wife, South City native Marie Acri-Taniguchi,  to make the next move. After much planning and hard work Chuck’s Island Grill has opened allowing locals to enjoy authentic Hawaiian food right here at Orange Memorial Park and surrounding areas!

Be sure to follow them on twitter HERE and on their Facebook page HERE to see where they will be set up for the day and what special offerings might be highlighted.They can also be found on instagram- @chucksislandgrill  and Snapchat-@c_islandgrill ! Be sure to grab your shaved ice when there – rumors are it’s the best on the mainland! Yelp reviews can be found HERE 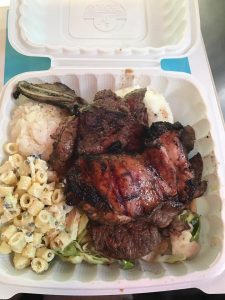 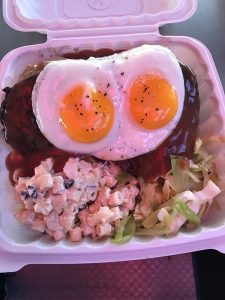 Authentic loco moco’s is a favorite!