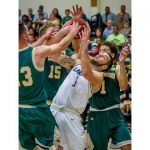 RIVERSIDE – California Baptist guard Michael Smith has earned just about every award possible over the past two seasons, from PacWest Player of the Year to All-American. This year he was named preseason PacWest player of the year, and while the success of the team doesn’t fully rest on his shoulders, it’s no secret who leads the Lancers.

Smith finished with 23 points Saturday night as No. 5 CBU downed Concordia, 89-55. The win ran the Lancers’ streak to seven straight, but it was Smith’s free throw with 15:28 remaining that was the highlight.

The basket put him in the record books as the Lancers’ all time leading scorer, breaking Warren Daniels’ record of 1,716 career points set in 1992.
Smith left the game to an ovation with 4:32 remaining and CBU holding a 79-48 lead. He was honored in a brief postgame ceremony with family and friends and given the game ball.

“It’s an honor,” said Smith, adding that his mother Natalie Cedeno drove down from San Francisco to attend the game. “It’s something I’ll never forget.”
The win improved the Lancers record to 15-1 and 7-1 in the PacWest. Guard Jordan Heading had a breakout game offensively, scoring a career-high 31 points and knocking down 6 of 9 3-pointers.

Concordia had won five of six entering the game, but the Lancers defense held the Eagles to 36 percent shooting in the first half and without a 3-pointer or free throw as CBU turned an early 8-6 lead into a 45-22 advantage by halftime.

Smith had already established himself as one of the top players in CBU history. Last season he was named PacWest Player of the Year and PacWest Tournament MVP, and was also selected to the All-PacWest, All-West Region and All-American team after leading the conference in scoring at 21.4 points.

“He’s turned into a dynamic leader,” Coach Rick Croy said. “His legacy is so special.”

CBU hasn’t lost since Dec. 8 when Dixie State pulled off a 75-71 victory in Riverside. The Lancers rebounded and just finished up a tough stretch of the schedule that included going 2-0 on their Hawaii trip, defeating Hawaii Pacific and Chaminade, and then picking up a huge road win on Thursday at rival Azusa Pacific.
Kalidou Diouf finished with 11 rebound and 10 points for CBU.