Having the drought as forefront in our minds the past few years many neighbors were understandably perplexed when they awoke to this strange white stuff in front of their homes and on the roads when they awoke last Friday morning after a major storm blew through. Brittany Tom covered all bases when she shared her photo with us “Flooded & hail/snow accumulated throughout the street” she wrote. 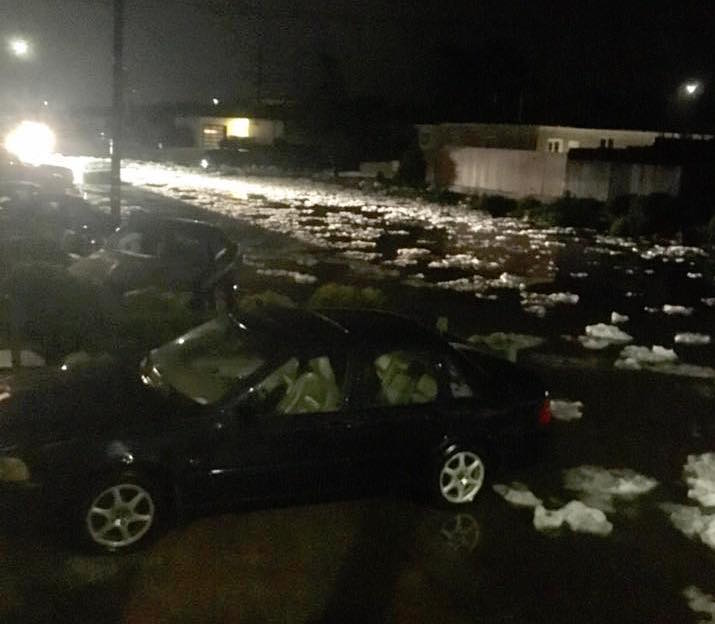 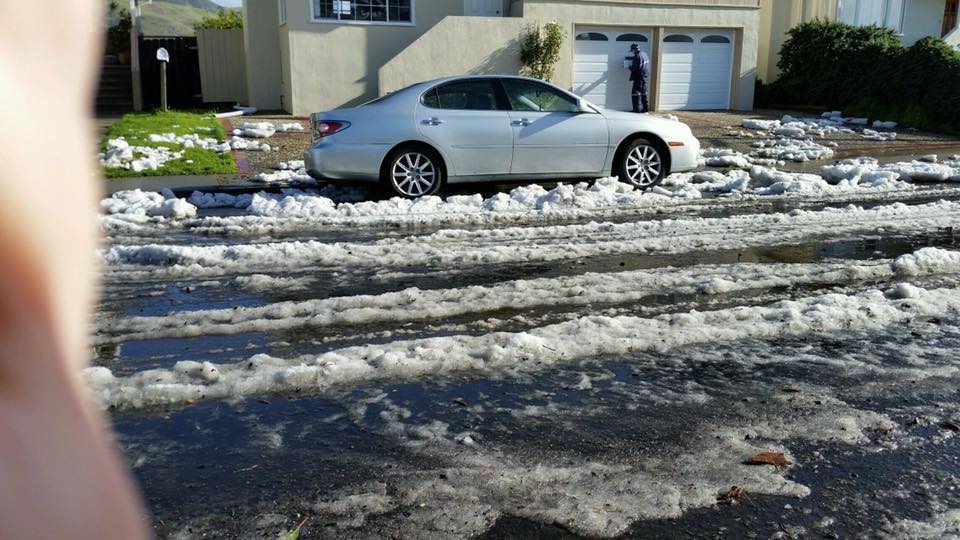 Willum Walsh shared a picture from the front of his home on Sunnyside Drive in Sunshine Gardens noting that his cars as well as 5 other neighbors’ were flooded. 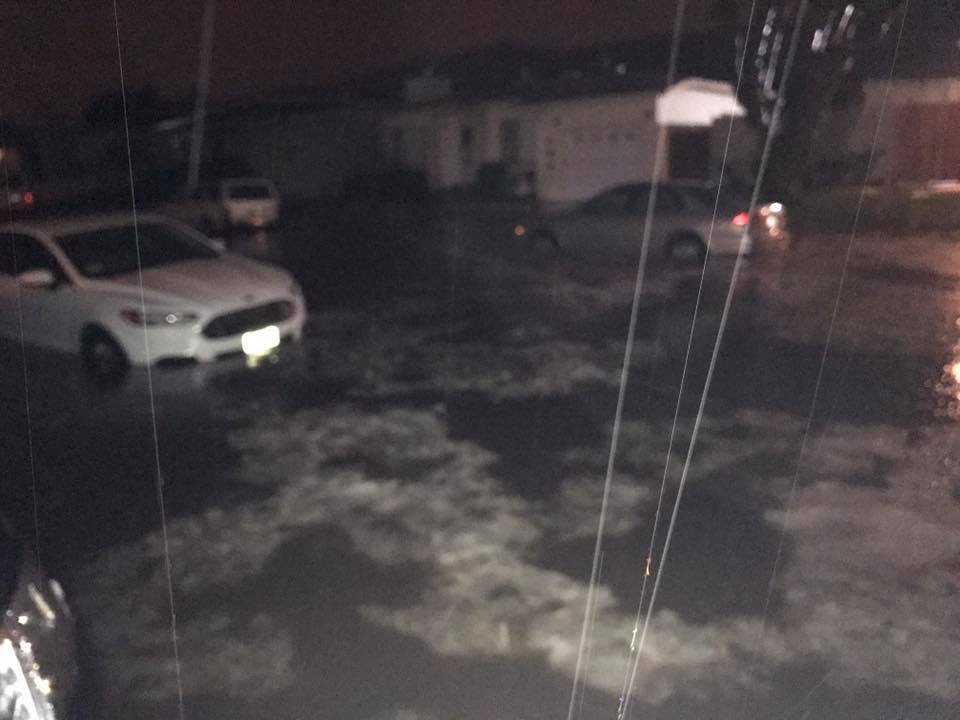 Many cars were flooded after the torrents of rain fell through the night
Photo: Willum Walsh

Jessica Chang, manager of Starbucks at the Transit Village arrived at work at 4:30am to find the area covered in hail.  “Here is a picture of the hail when we came in for opening this morning.” she reported 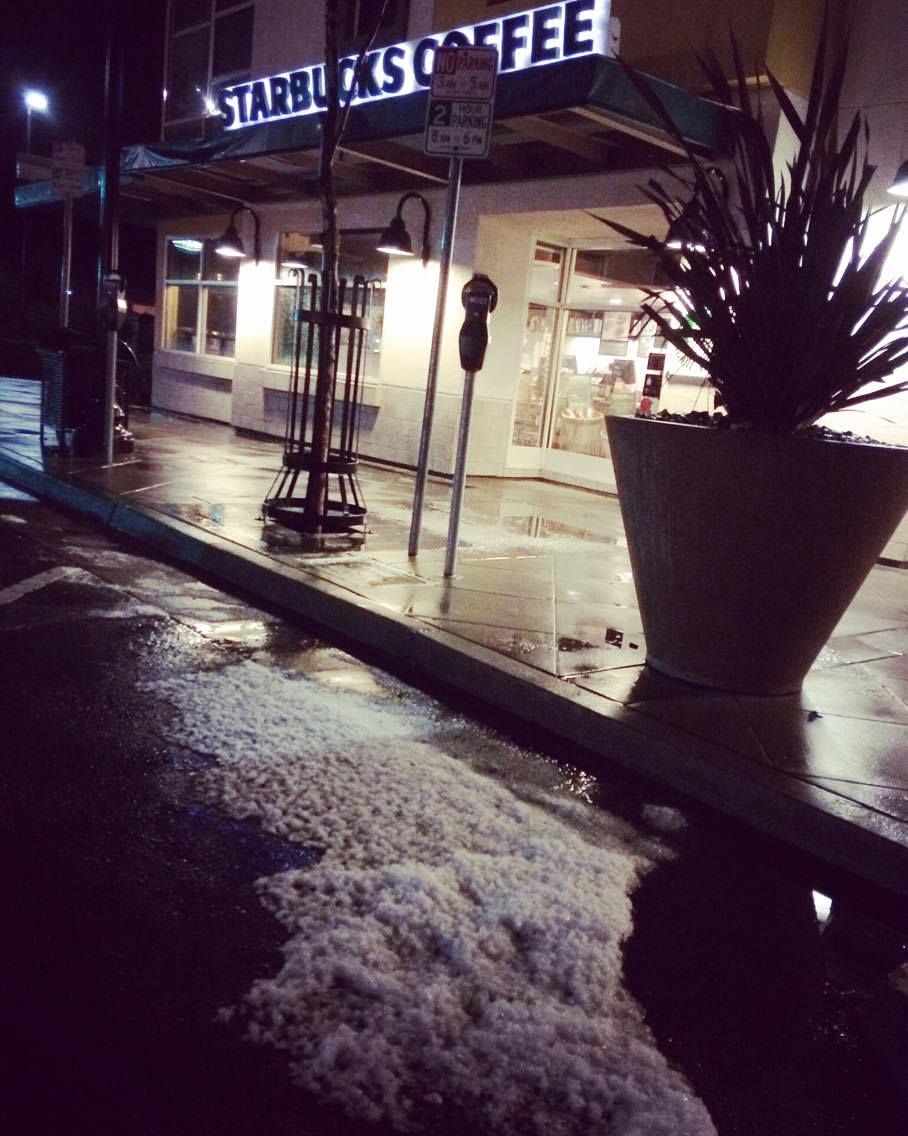 Jessica Chang captured this photo at 4:30am 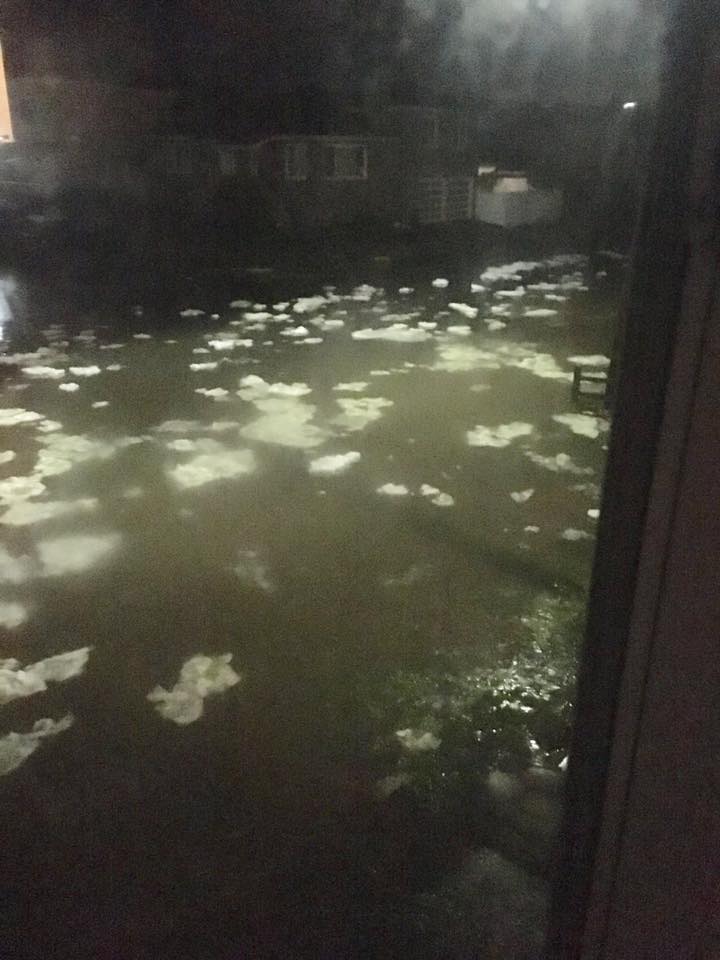 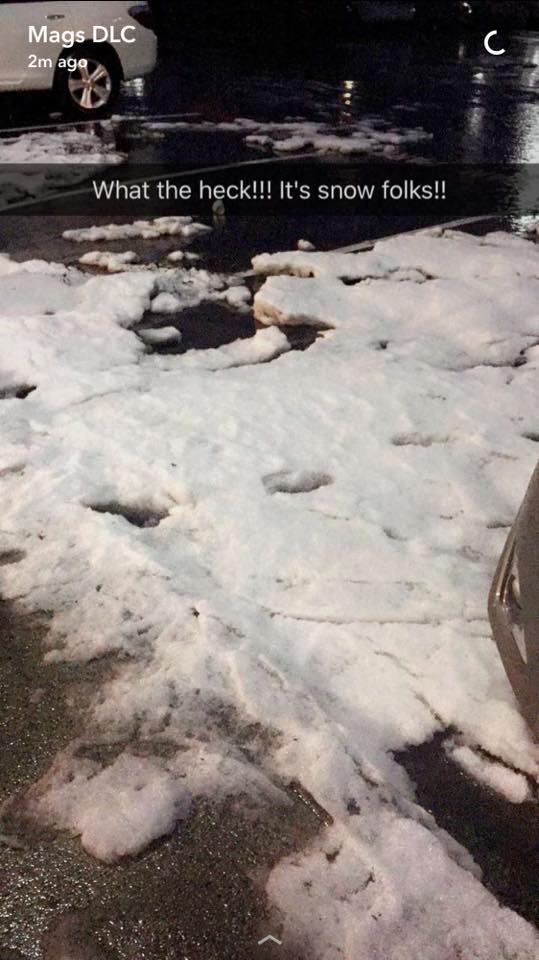 Some neighbors were understandably concerned the effects had on their pets as the thunder woke up many through out the night. Monina C checked in with “My poor dog was terrified from the storm. Although I love thunder and lightning, I wish I had an instant fix for storms causing anxiety for my buddy.” “My poor dog went through her first lightning storm shaking away.” said JoAnn W. Courtney T lamented “We got pounded in Daly City/Colma. My dog even peed herself.” In real time, 4:30am, Stephanie M checked in “Our big dog is terrified and under the covers in my bed.”  to which Janet L replied “Poor Rosie! Levi slept through it. One benefit of being a deaf dog. Lol” and many other neighbors agreed – their pets did likewise.

The middle of the night thunderstorm was appreciated by many, if not by their pets, as Nancy B said “Just loved the sky show last night. Although our dog didn’t. Thanks, Mother Nature. Would love to see more” to which Lauren G responded “It was a very exciting storm. I had to console my teddy bear.” Cheryl B was laughing as she posted “Insane! Lightning so bright⚡⛈? & wind. I think I saw flying monkeys & a house fly by!”  Laura M also appreciated a good storm “That was the best way to wake up I could think of, I opened the drapes and laid in bed watching it go by.” Lucy B concurred “We did the same!” and Corey L was also enjoying the show. Carey W checked in “Up here near Sign Hill was crazy loud and bright. Woke up our entire house. What a show. At one point the whole house shook.”

However, some had a bigger scare as George A replied to our inquiry if everyone was doing OK at 4:30am “My room is shaking, I hope you don’t mind I Live in San Bruno, about a block away from Artichokes Joe’s casino and the Thunder storm woke me up /: ”  It was 5am when Melissa P posted “A tree fell on our house, barely missing our bedroom! An inch of hail covered the street… that was truly scary! And I’ve been through hurricanes before, but, this was insane!” 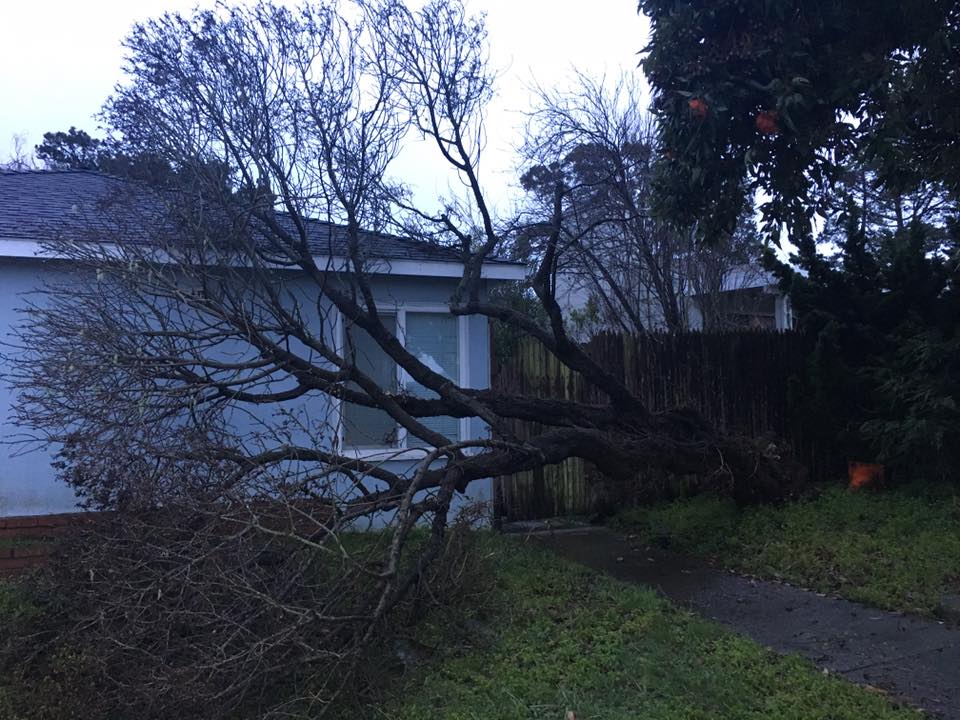 Melissa M shares this photo “Tree fell onto our house!” she exclaims 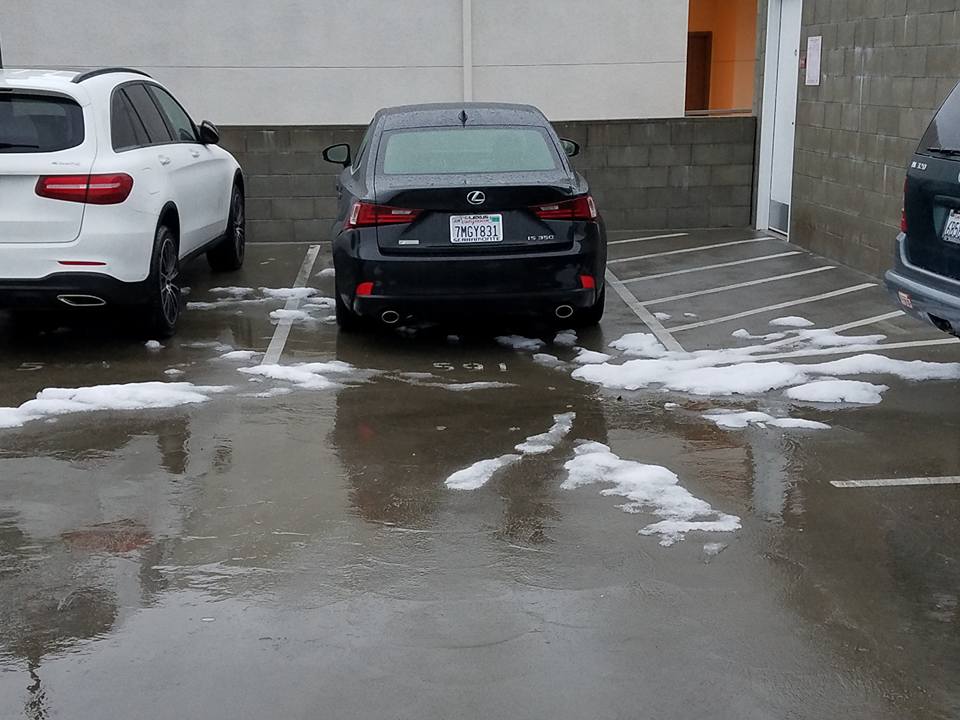 “The hail left at 730am this am, top floor of South City Apartments garage. That’s a first!” shares Deb B 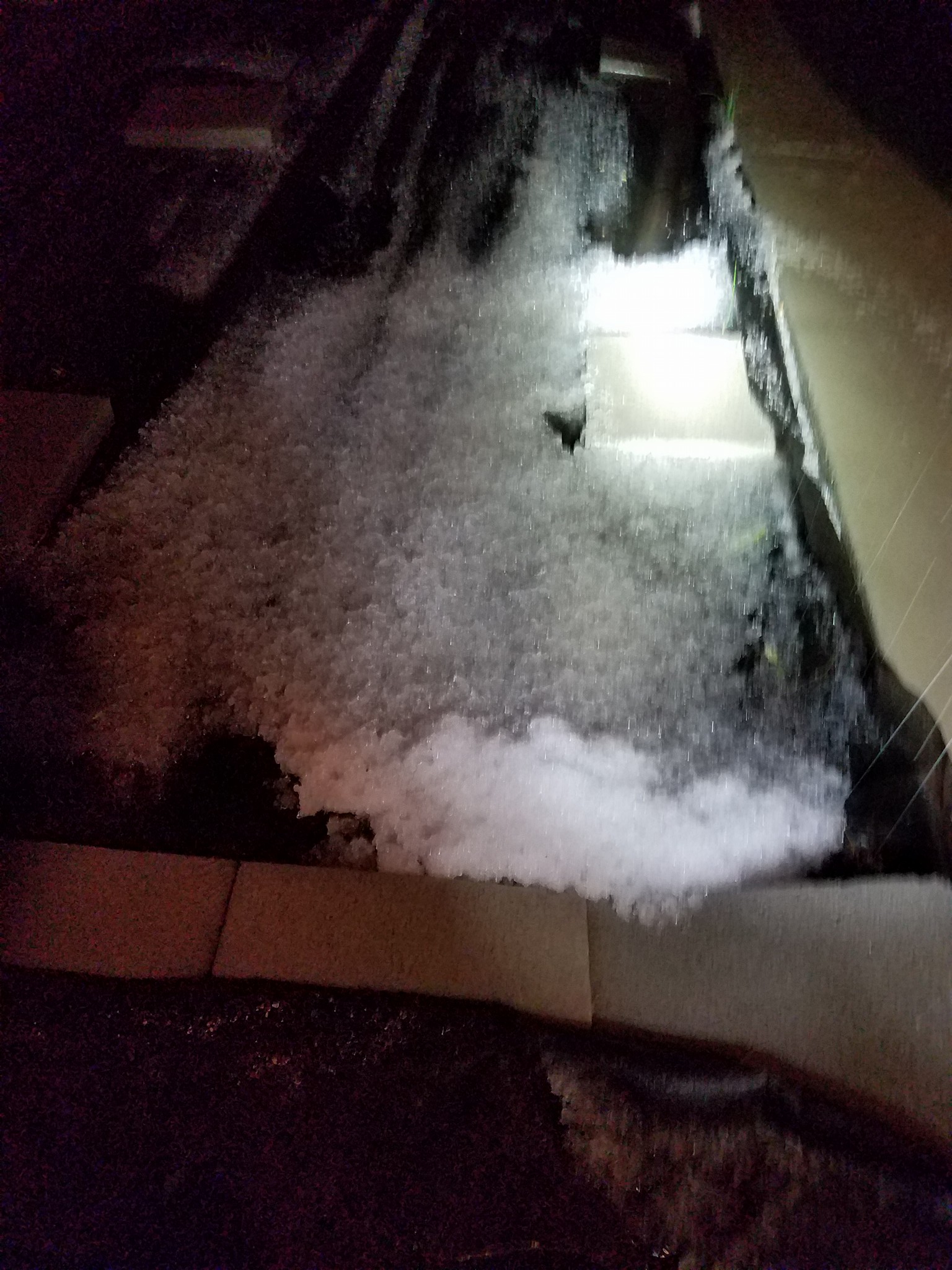 Leonard E shared a number of photos – including this showing the ice all around his home & neighborhood. 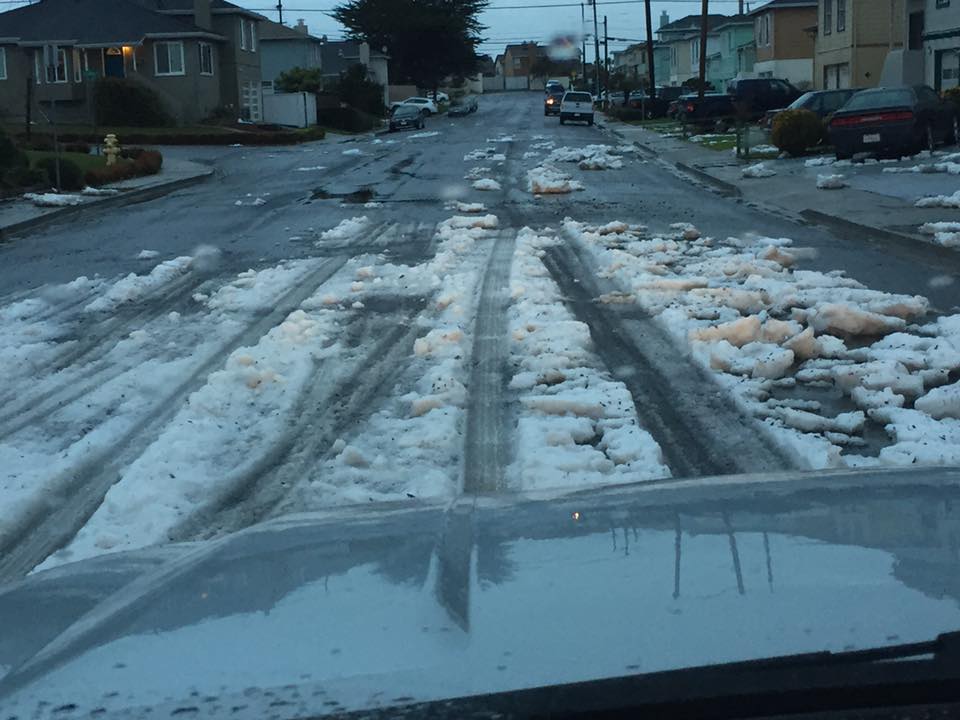 Theresa T shared this photo of Alta Loma, one of the streets we received most of concerns. 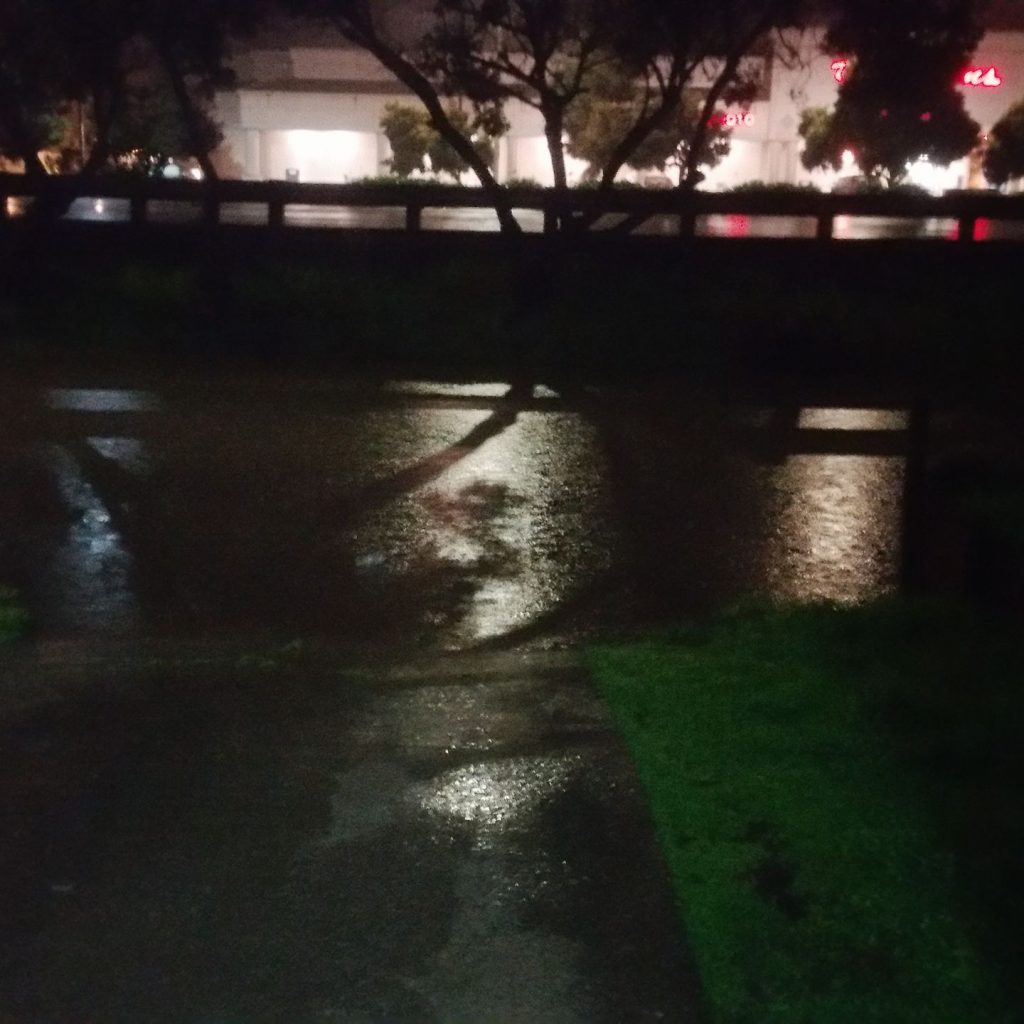 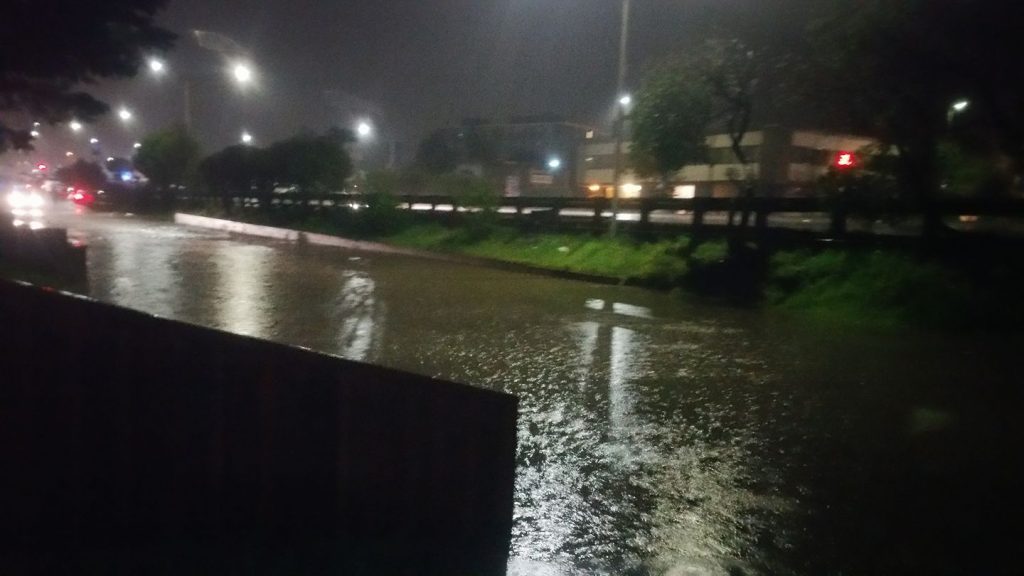 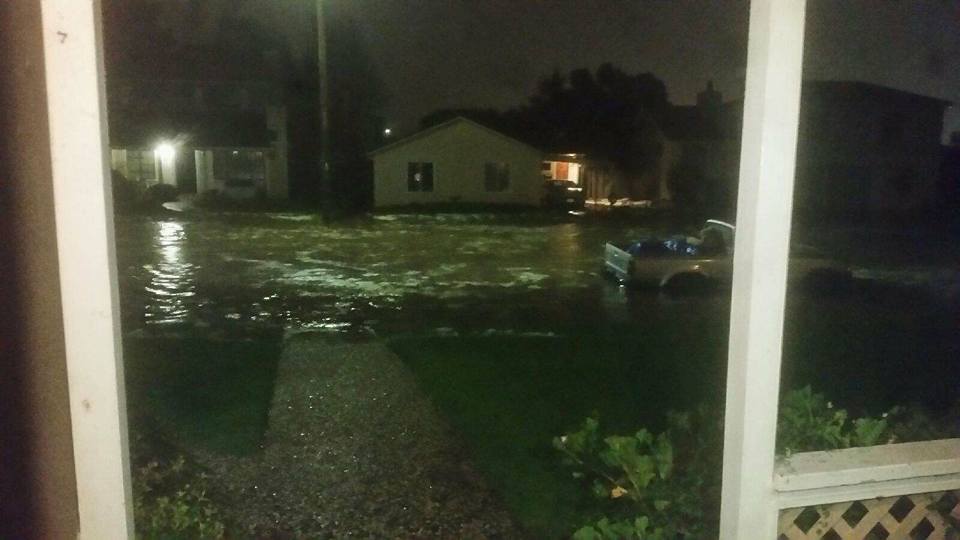 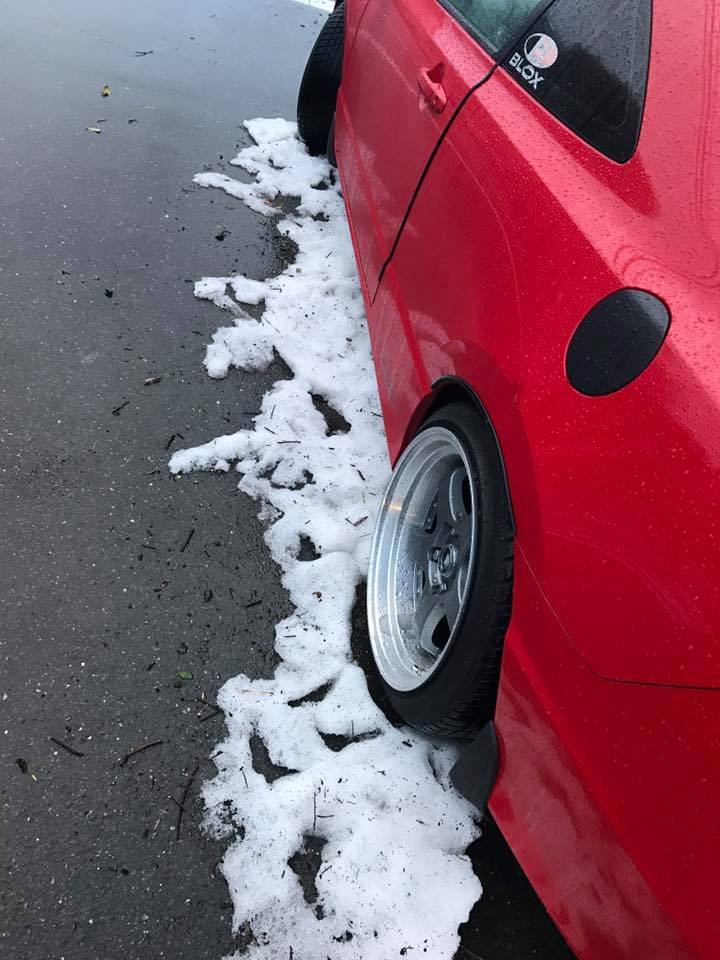 “Yep snow for sure” Christina B tells us. 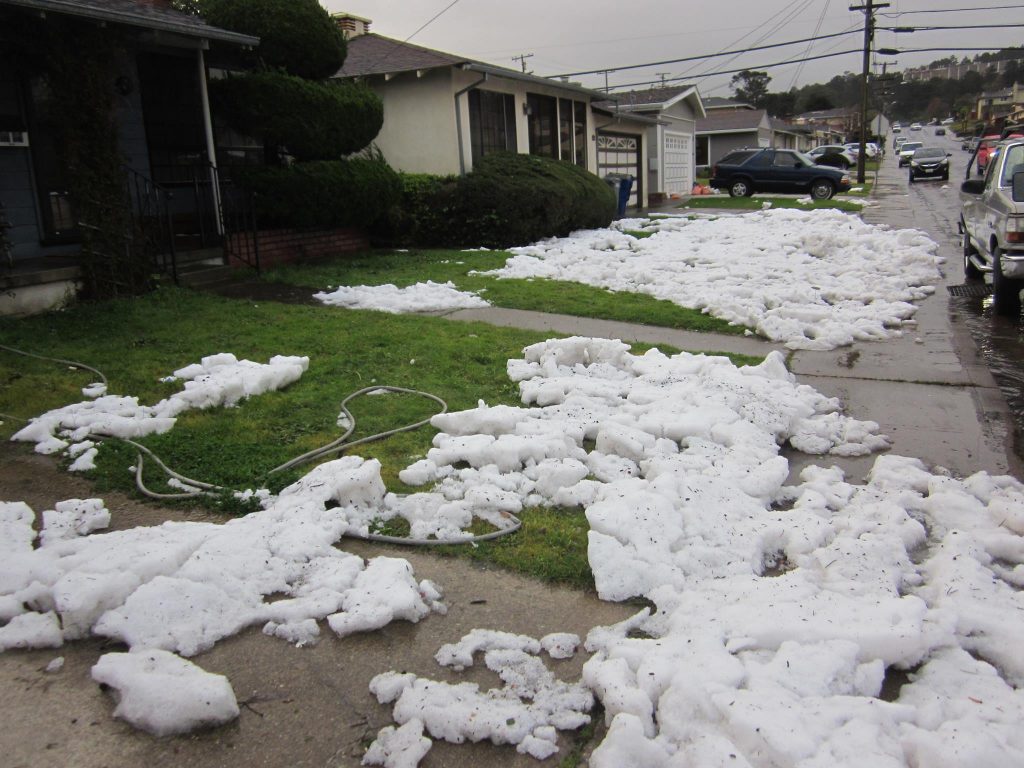 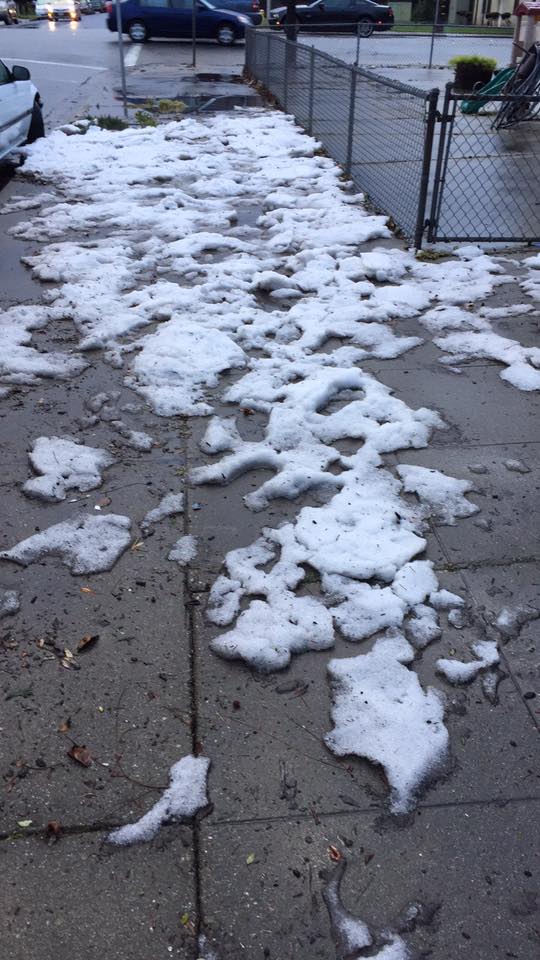 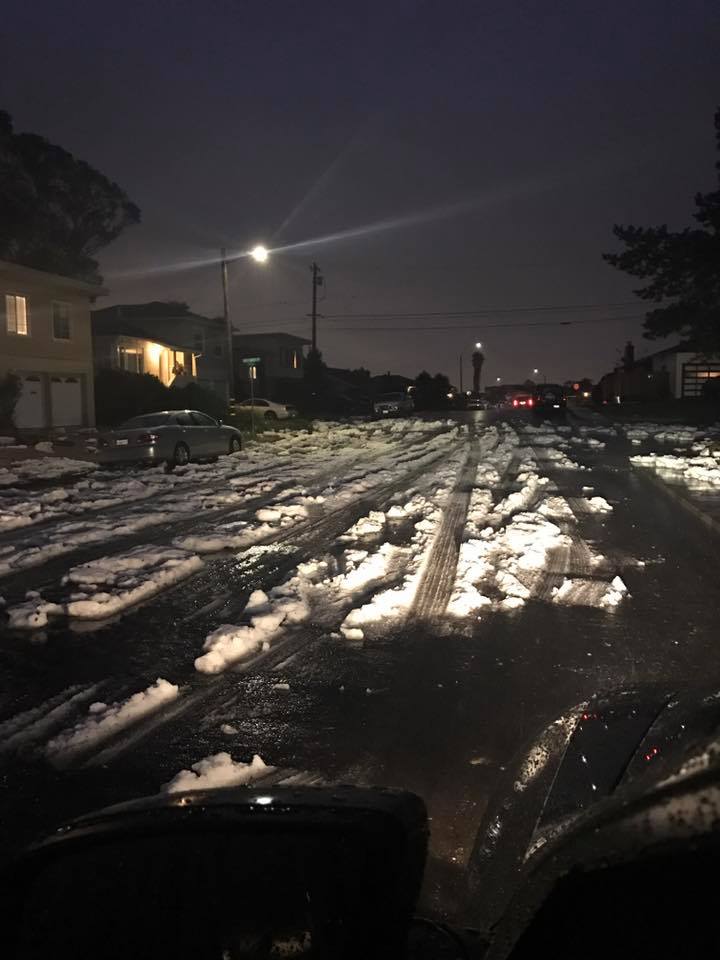 “Last time I remember that much hail was early 2000s, happened middle of the afternoon and the sun came out right after and started melting it all” reminisces Justin C.

“I don’t care if it’s hail. I’m saying it’s snow. It sure looks like snow”wrote Ayrrn “I saw it on my way to drop Carlos to school on the side of El Camino and in the planter boxes at Pacific Market. There was even some on the freeway going to SF.”

“Snow is made up of one or more tiny ice crystals that come together to form the intricate and unique shapes of a snowflake,” says ABC weather specialist and presenter Graham Creed, “Whereas, hail is a frozen raindrop and is generally a lot bigger than a pure crystal of ice.” 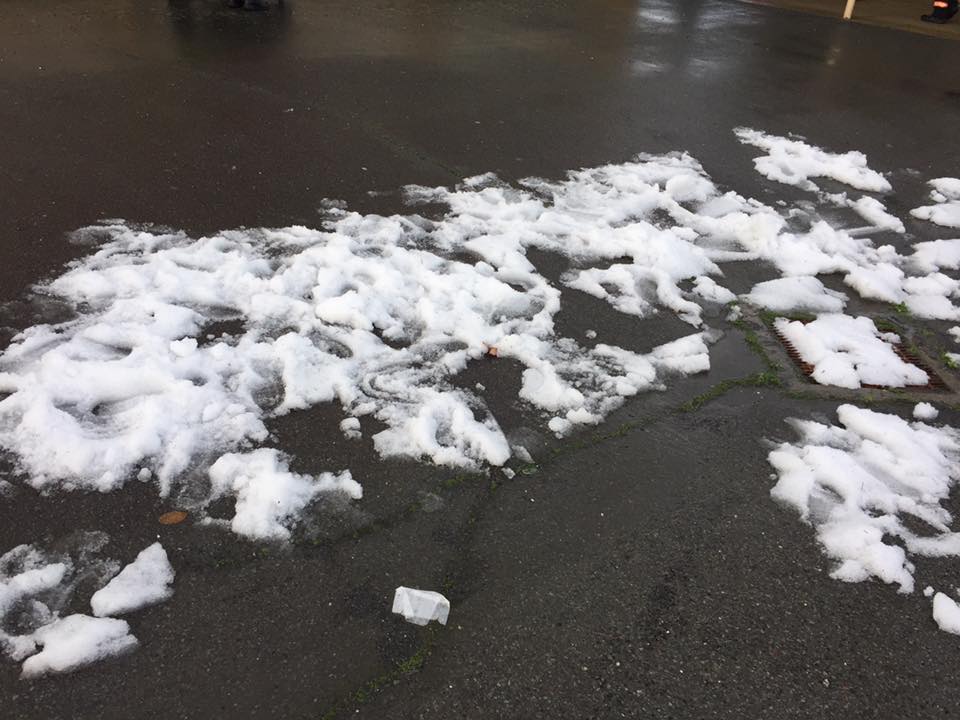 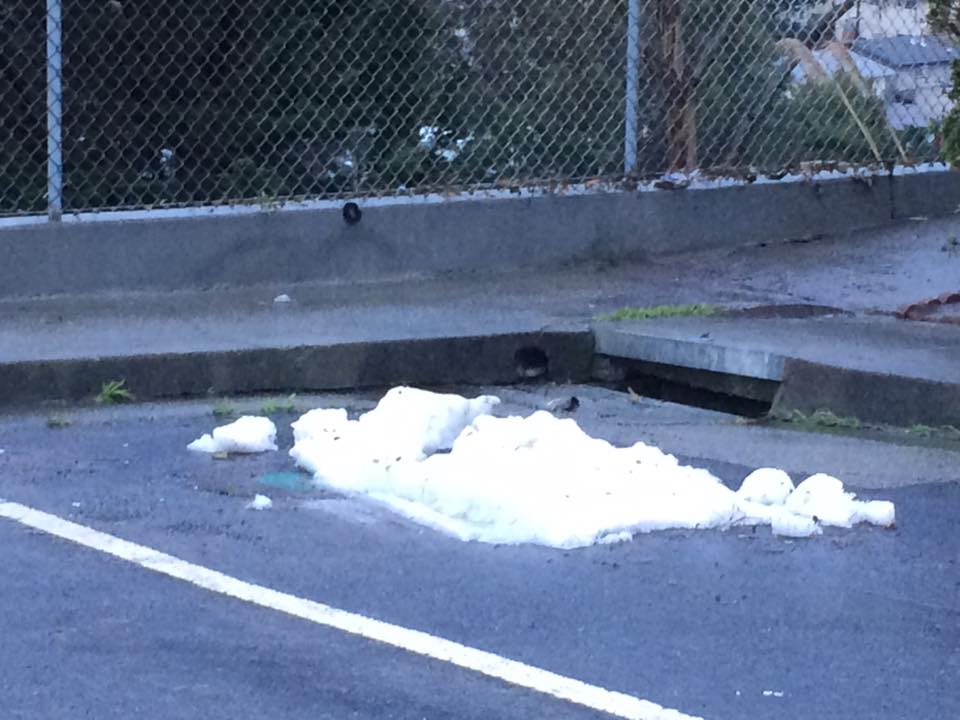 “This was at the end of our street at 7:30 am. We live off Westborough. Some was still there at 1pm, and under the bushes there was some at 7pm!” shares Caroline

Kimberly’s words echoed many other moms “The only time it’s ok to be a few seconds tardy to school in the am!!” 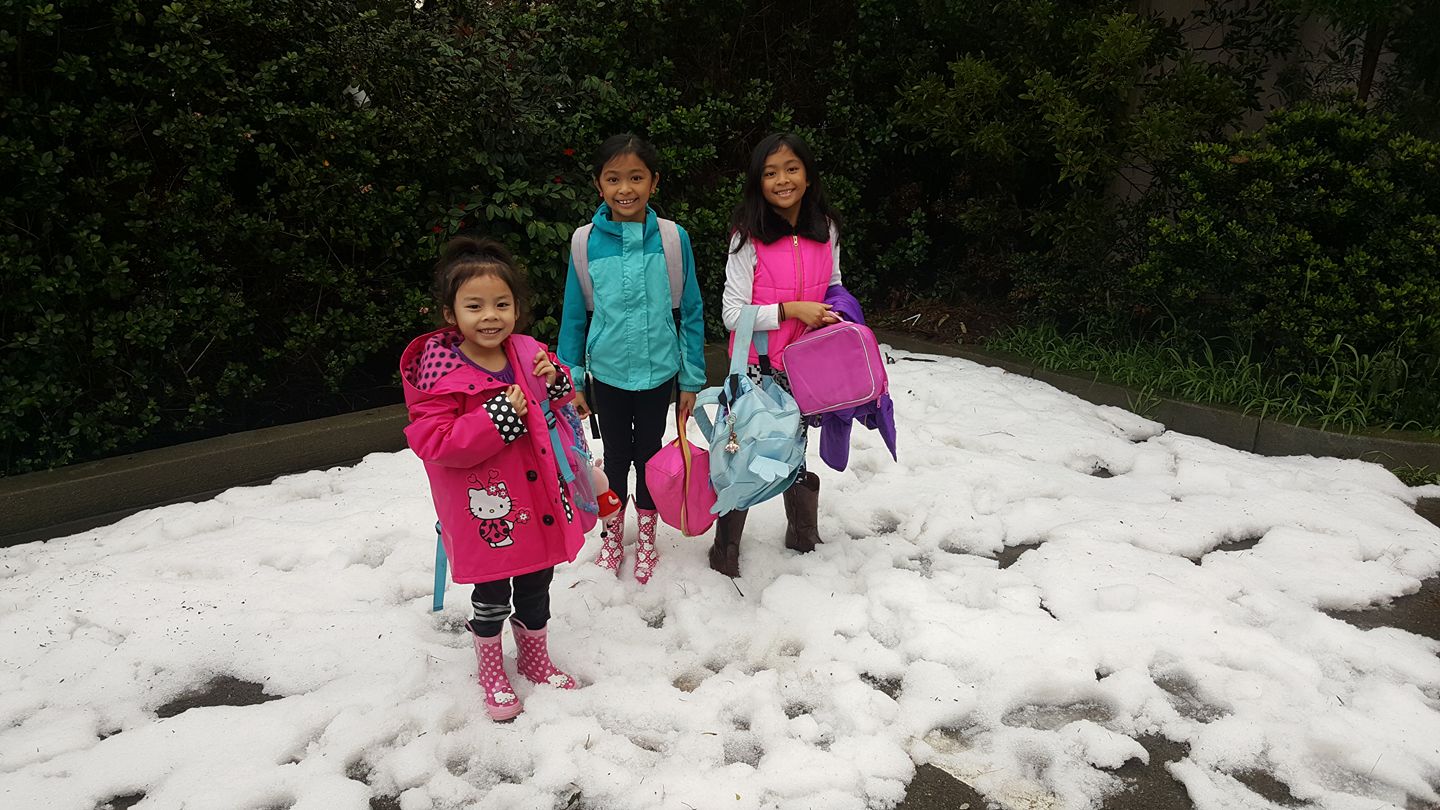 Sometimes you have to stop to smell the roses – or check out the ‘snow’!!
Photo Kimberly

Even today on Monday, the cold weather is taking its toll as Yolanda shares this photo from 10:30am this morning 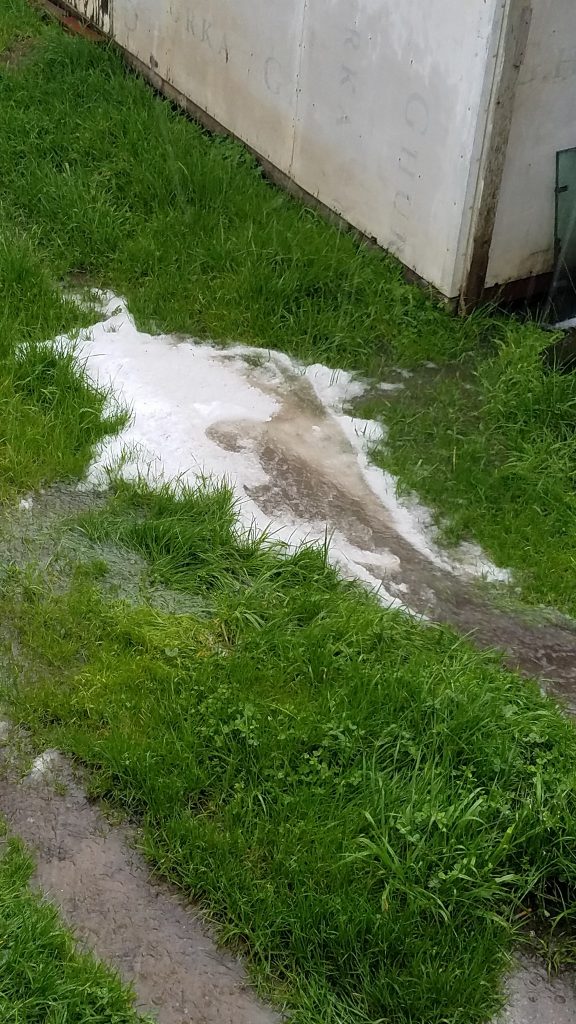 Yolanda shares this photo of this mornings ice piles 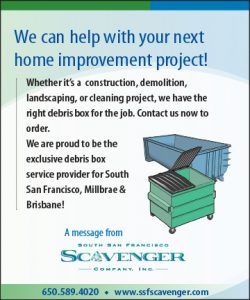 Weather report for South San Francisco shows we should be expecting a break from the wet stuff that we have so desperately needed the past few years especially. A bit of showers may find us later tonight with predicted clear skies through Wednesday.

In the meanwhile many are cleaning out from the damage left behind. We would like to remind our neighbors the South San Francisco Scavengers Company does offer TWO free pick ups a year which offers us a great opportunity to dump whatever is not salvageable. More details on the  Scavengers On Call Cleanup Program CLICK HERE or call 650/589.4020.   For bigger jobs consider renting a debris box, the Scavengers offers many different sizes, perfect should neighbors want to share one – CLICK HERE for more info!

← Heart of the City Farmers’ Market and Kaiser Permanente: A Produce Partnership and so much more…
Chef’s Warehouse Is Closing – Lease is up May 2017 →