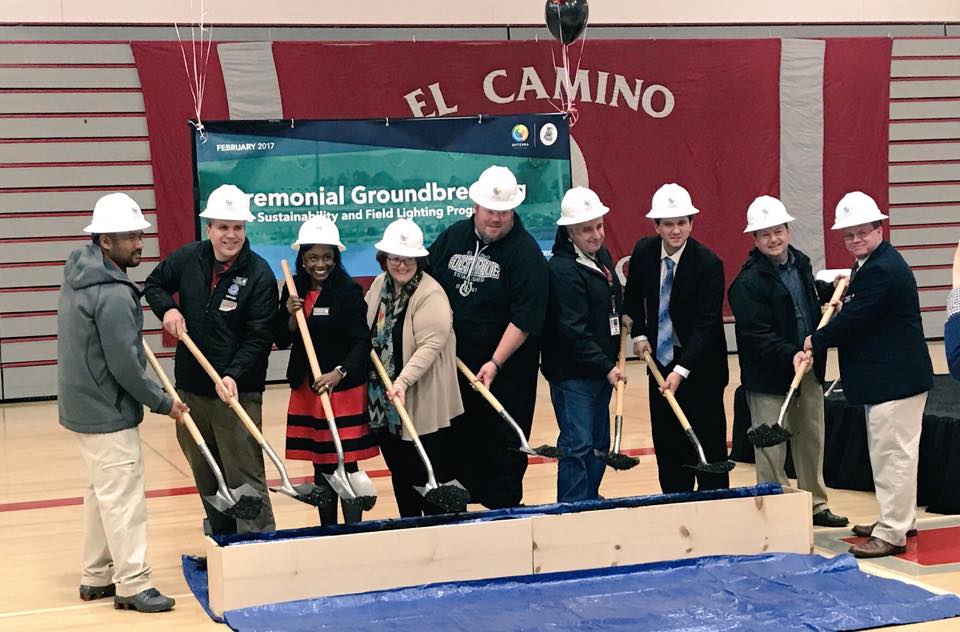 I thought I was on the list to speak today at the ground breaking ceremony, but plans change. I’m posting this because I wanted to thank all those who made this day possible.

I would like to thank the past school board members Judy Bush / Philip Weise / Maurice Goodman / Liza Normandy / Shirley Hoch / & former cabinet member & current Superintendent Ms. Moore for their part in the reason why we are today. If they did not take the steps to turn to renewable energy none of us would be here today, and I’ll tell you why in a minute. I like to say thanks to all of the citizens of SSF for supporting Measure J.

When Measure J came about back on November 2nd 2010 I did not know much about it. I remember driving past El Camino in the summer of 2011 and it looked like they were building a Sonic Burger joint in the parking lot. I drove home with my wife saying what a waste of dough, Solar Power?? Why don’t they put in a field or something useful?
Well in the end both High schools in the district now have brand new beautiful fields thanks to measure J, and El Camino got a modern Science building along with the field.

Now I get to why we’re here today. One Wednesday Night in May I could not sleep and the movie Hoffa was on. Well if you don’t know the movie this guy he stood up for the working man against some pretty tough opposition, and was not afraid to speak out. I went to work and My very good friend and co-Athletic Director Jeff Cosico were sitting in the office our desk face opposite directions. I said Cos, I’m going to the school board tonight and ask them to pay for portable lights for 3 games a year until we get our permanent lights. I think it’s only fair right Clifford field had lights when JFK was in office. What’s the worst they could say right? Cos kind of said good luck with that one Jake. Well I did that and the Board didn’t say much and that was that.

The next day Cos goes Hey Jake Mr. Goodman looking for ya. I thought man I’ve been pretty good what did I do wrong. Well Mr Maurice Goodman found me and he followed me down on my lunch break I used to play dominoes with one of my students. He said the district has some money for going green and solar but it can only be used for projects dealing with Lighting. He then said the two people I need to see were Mr. Michael Kruase & a Lady by the name of Courtney Jenkins. Our first meeting was at Royal Pin Doughnuts. That was almost 3 years ago. Since then Courtney & Steve of Opterra Energy paid for 7 night football games and this year’s EC vs SSF Soccer game. Courtney & Mr. Krause both have done countless hours of work, and Courtney attended many board meetings. She is very well respected in the district and the Current Board because she is a first class human being.

I want to thank our current School board Mr. Patrick Lucy, Mr. John Baker, Mrs. Rosa G. Acosta, Ms. Daina R. Lujan, Mrs. Pat Murray for making this great day possible. Special thanks to our Superintendent Ms. Moore & Cabinet member’s Michale Krause as well as our Administration Mr. Lunt / Ms. Smith / Ms. Jackson, & Mr. Briano for their support. Just think in 1959 the area you now know as Colt field was a Duck Farm, now In my humble opinion the most beautiful field on Earth, and next Fall let there be Lights. Thanks to all of you for making this happen, it just shows what a group of people can do by working together, and pulling in the same direction. In the end why did we do this? for the most important people of all are the kids who get to play and learn life lessons thru sport on a safe beautiful field. Now El Camino High School can finally say I’ll see you under the FRIDAY NIGHT LIGHTS.

To read the previous article on this please CLICK HERE