UPDATE October 30, 2017 from Billy Gross, Senior Planner, City of SSF:The property owner is in the process of obtaining approvals to renovate the existing shopping center, which would include changing the appearance of the existing exterior walls (but keeping the existing footprint), and revising the parking lot configuration to be more efficient.  Not sure of a construction timeline at this point, but likely early 2018.

UPDATE by Jaime González: Update on Centennial Village- Last Night March 22nd, City Council denied 3rd Amendment to take away some of the Prevailing Wage agreed upon by Developer. Instead voted to go into default proceedings. Developer has 30 days to come up with new plan. After 30 Days, city will vote to cancel project. 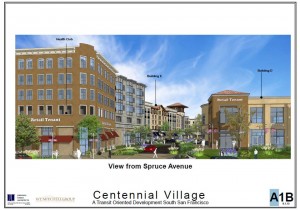 The March 2, 2017 agenda for the  South San Francisco Planning Commission included the third amendment of the Centennial Village development at 180 El Camino Real in the former Safeway shopping center to extend the start of the construction date up to one year. The Planning Commission meetings are no longer televised and the minutes have not yet been updated to the City website yet the documentation below state the demolition of this site will commence shortly after the signage of this Third Amendment with new  construction to begin within one year. Prevailing wages have also been re-visited per the documents below.

Rumors on the street have long been spoken the development was not cost effective or doable for the developer who originally was said to be interested in renovating the shopping center and was not expecting to add residential units to this valuable property that sits in the midst of a major transportation corridor.

Because our region continues to experience such astronomical housing costs along with housing storages regional agencies such as * Association of Bay Area Governments (ABAG) dictate many needs to fulfill these gaps. With so many additional businesses and employment opportunities our need to add to the housing stock is critical.  In addition the * Grand Boulevard Initiative offers  guidelines for the best possible usage of the El Camino Real. Because many residents are not aware of regional bodies that have impact on what our City does and does not do, we have included some general information below that gives an overview, please scroll down to read more. This will help many understand some of what our City Council and staff must work with and through to achieve forward movement in our City.

Below are the documents presented at this past Planning Commission meeting and we will update as more information becomes available. Thank you to those who help bring this information to our attention allowing us to share with a wider audience. For more on this development on Everything South City please CLICK HERE.

To see other construction updates in our City please CLICK HERE to access this great resource provided by the City of South San Fransisco. 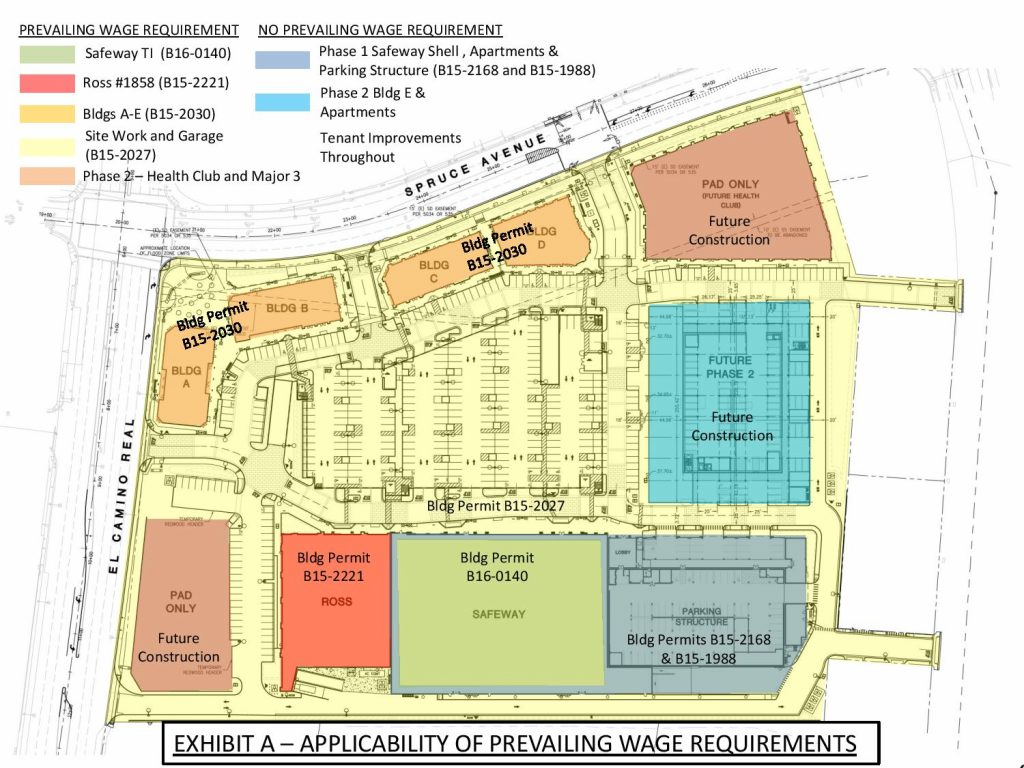 This is the SSF Draft of the Third Amendment:

This Third Amendment to Development Agreement (“Third Amendment”) is entered into by and between EL CAMINO AND SPRUCE LLC (“Developer”) and the CITY OF SOUTH SAN FRANCISCO, a municipal corporation (“City”) on this       day of , 2017.

NOW, THEREFORE, in consideration of the mutual covenants and promises of the parties herein contained, the City and Developer agree as follows:

The following components of the Project will not be subject to prevailing wages:

Exhibit A – “Applicability of Prevailing Wage Requirements” graphically depicts the portions of the Project that are and are not subject to the payment of prevailing wage. For those portions of the Project that are subject to prevailing wage as set forth in this Section 6.10, prior to issuance of a final building permit, Developer shall provide the City with copies of certified payroll demonstrating that prevailing wage has been paid in accordance with the requirements of this Section 6.10.

For the purposes of this Agreement, “prevailing wages” means not less than the general prevailing rate of per diem wages, as defined in Section 1770, et seq. of the California Labor Code and Subchapter 3 of Chapter 8, Division 1, Title 8 of the California Code of Regulations (Section 16000 et seq.), and as established by the Director of the California Department of Industrial Relations (“DIR”). In any case where the general prevailing rate of per diem wages shall be paid, such rate shall be adjusted annually in accordance with the established rate in effect as of such date.

IN WITNESS WHEREOF, this Third Amendment has been entered into by and between Developer and City as of the date and year first above written.

APPROVED AS TO FORM:

*About Association of Bay Area Governments: ABAG was created by local governments to meet their planning and research needs related to land use, environmental and water resource protection, disaster resilience, energy efficiency and hazardous waste mitigation, and to provide risk management, financial services and staff training to local counties, cities and towns.

*About Grand Boulevard Initiative: The Grand Boulevard is a collaboration of 19 cities, counties, local and regional agencies united to improve the performance, safety and aesthetics of El Camino Real. Starting at the northern Daly City city limit (where it is named Mission Street) and ending near the Diridon Caltrain Station in central San Jose (where it is named The Alameda), the initiative brings together for the first time all of the agencies having responsibility for the condition, use and performance of the street.

The Vision:El Camino Real will achieve its full potential as a place for residents to work, live, shop and play, creating links between communities that promote walking and transit and an improved and meaningful quality of life.

The Grand Boulevard Challenge:El Camino Real will become a “grand boulevard of meaningful destinations” shaped by all the cities along its length and with each community realizing its full potential to become a destination full of valued places.

The Grand Boulevard Task Force is a broad federation of interested public and private parties that challenges communities to rethink the corridor’s potential for housing and urban development, balancing the need for cars and parking with viable options for transit, walking and biking.

Stretching from Daly City to San Jose, the vision is of a boulevard that connects communities by a mix of land uses designed to attract people. Cities are encouraged to design for neighborhoods that include high quality building designs and diverse land uses, preserve historic buildings and places, and enhance our economic and cultural diversity, with the broad involvement of residents, workers and local businesses. Rail stations and bus facilities are valued not only as vital transportation services, but as public gathering places and assets to spur transit oriented development. Roadway improvements will be context sensitive while continuing to meet the need to move people and commerce and preserve environmental resources. Above all, change will recognize and incorporate our history and create a sense of community.

The Grand Boulevard initiative will succeed only with the enthusiastic support of public agencies, leading businesses, non-profit agencies, neighborhoods and community advocates. The Task force endeavors to coordinate planning efforts, develop incentives and other mechanisms, and secure funding to make this vision a reality.

Meeting the Challenge: El Camino Real is the most important arterial on the Peninsula, carrying more people than any other. It meets these responsibilities fairly well, though there are widespread complaints about congestion, appearance and safety. The public perception has been that the street is not well planned.

Though many localized planning efforts are underway, they remain uncoordinated. For that reason, the San Mateo County Transit District (SamTrans), Santa Clara Transportation Authority (VTA), Joint Venture: Silicon Valley Network, San Mateo City/County Association of Governments (C/CAG), and SAMCEDA (San Mateo Economic Development Association) started an extensive program of collaboration, bringing together all of the agencies having partial responsibility for the street, for the first time in the history of El Camino.

The effort also includes businesses located on El Camino, environmentalists, labor, and advocates for housing, transit, bicyclists, economic development
and smart growth. It features two committees, a Task Force comprised of policy makers from the public and private sector, which will make the final decisions on all matters, and a Working Committee comprised of local and regional agency staff members, which will perform the detailed research and make recommendations to the Task Force. The Working Committee anticipates widespread participation from the many interested groups.

Technically the goal is to produce a coordinated series of policy decisions that will be embraced by all jurisdictions, thereby helping El Camino Real to function and look better. But the vision goes farther: the Grand Boulevard initiative seeks to recreate the street to do a better job of connecting our communities (north-south) and of better integrating it with each of our communities (east-west.). It will transform El Camino Real into a boulevard that will stand as one of the highlights of our communities, successfully fulfilling its role as the Peninsula’s most important arterial, while bringing pride and unity to San Mateo and Santa Clara counties.