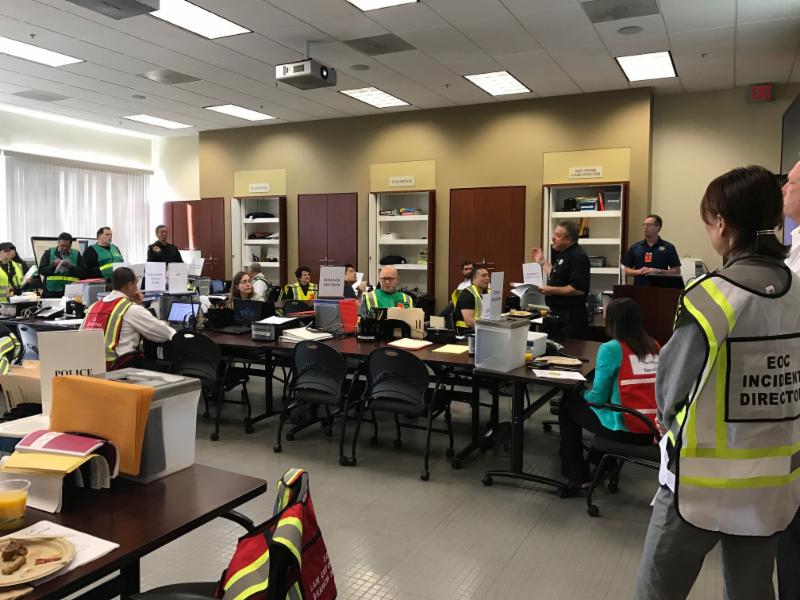 The City of South San Francisco, in partnership with San Mateo County’s Health System and Mosquito and Vector Control, participated in a mock emergency drill called “Silver Dragon” to test the agencies’ readiness when it comes to emergencies. The simulated emergency held last Thursday at the Emergency Operations Center in South San Francisco tested the City’s and County’s ability to effectively control mosquitos and other disease-spreading animals, as well as respond to an outbreak of a mosquito-borne disease such as the Zika virus.

“These training exercises are important to check our emergency processes that are currently in place to evaluate how they can be strengthened to be more effective,” said Disaster Preparedness Manager Ken Anderson, Sr. “When it comes to emergencies and disasters, even the best planned situations may become unraveled due to unexpected circumstances beyond our control. Drills, like the one we had last week, are especially important to allow our agencies to work closely and see how we may constantly improve our responsiveness.”
Thursday’s practice disaster drill, known as the Silver Dragon Emergency Exercise, involved the South San Francisco Police and Fire Departments, City Staff, representatives from the County’s Health System and Mosquito and Vector Control, and South San Francisco’s Community Emergency Response Team (CERT). As part of the exercise, volunteers of the South San Francisco CERT went door-to-door covering nearly 1,600 homes in six neighborhoods/areas to deliver educational materials in reusable shopping bags.
This year serves as the 11th year the City of South San Francisco has partnered with the County and participated in the Silver Dragon Emergency Exercise and Anderson says every time an exercise is done with the County, new lessons are learned.