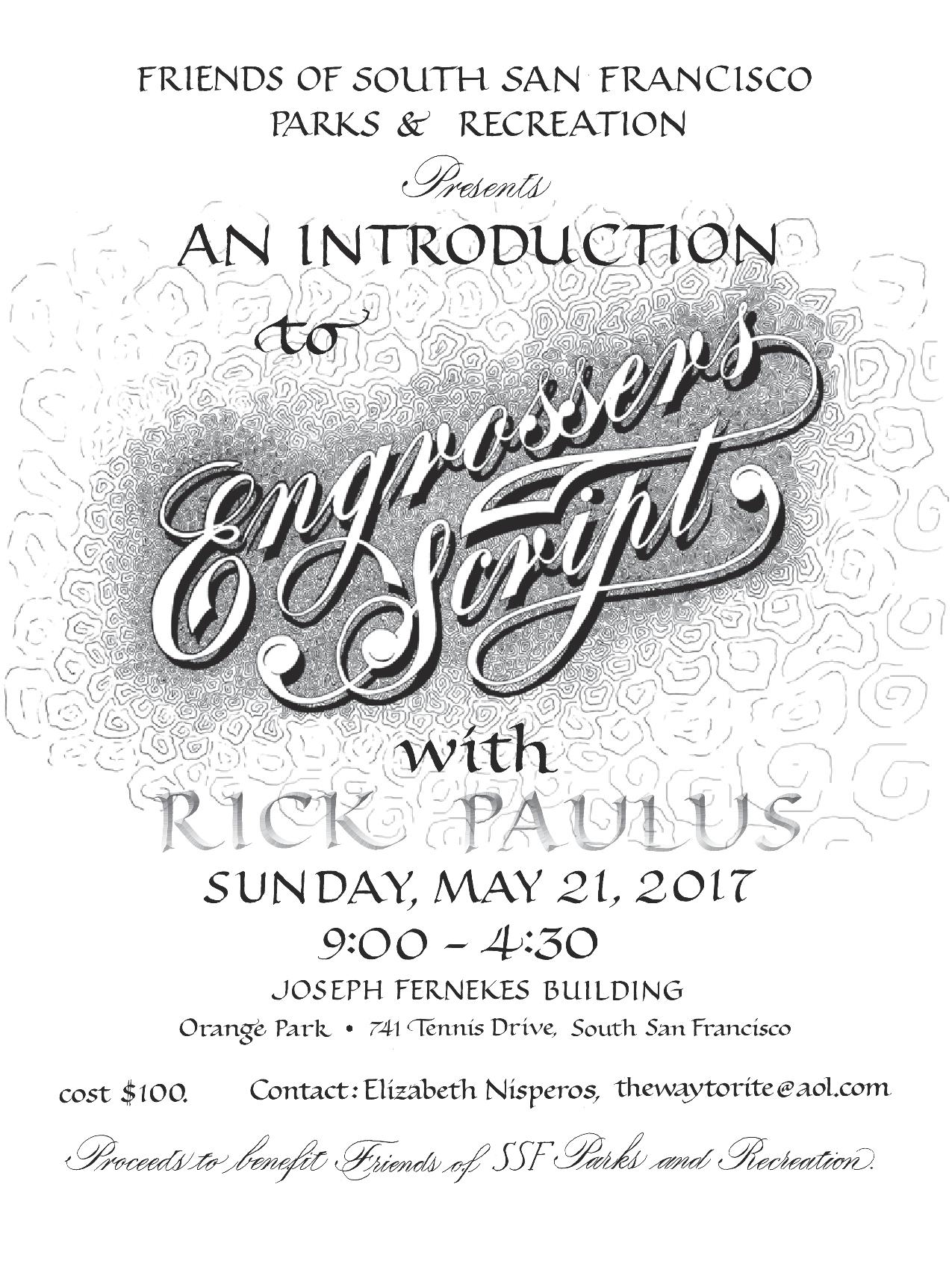 May, as the composer Lerner and Loewe of Camelot wrote, “It’s May, it’s May, the month of “YES YOU MAY”!” Indeed, you may enroll in   Rick Paulus workshop “Introduction to Engrosser  Script”. . Though the world is now in a computerized digital era, the Former White House Chief Calligrapher states it is the script used for Presidential appointments in the past 100 years and White House dining. All Presidential appointees get an ‘engrossed’ document signed by the President.  Engrosser script is an American version of the English Roundhand adapted by the Zanerian school

Paulus does another fundraiser to benefit the Friends of the Parks and Recreation on May 21, 2017 from 9-4:30 pm at Joseph Fernekes Bldg, 721 Tennis Drive, South San Francisco. Cost is 100.00 Register early and save a spot to ensure your seat. To enroll, please CLICK HERE.

Who receives handcalligraphed documents or invitation?: You must be a head of State(President, Prime Minister, Pope,etc), Royalty (King,Queen, Sultan, Dukes,etc) or a top awardee(Pulitzer Prize, Nobel Prize) or you had done something of superior excellence or outstanding  valor, service, honor in your field .. Or you must be uninhibitedly wealthy (Steve Jobs, Bill Gates, Donald Trump) to commission handcalligraphed invitations for your wedding or parties.  Handmade things are quite expensive.

Well you don’t have to be a billionaire or do something extraordinary to receive a handcalligraphed document. Just learn calligraphy and you can make yourself and  other people  happy with your handmade one-of-a-kind card and invitation. Calligraphy is also the art of slowing down, thus it’s a form of meditation while doing a tiny letter to form words. A letter is a universe by itself when you occupy the calligraphic world.

The body of the Charters of Freedom: Declaration of Indepedence, Constitution and the Bill of Rights were handwritten or “engrossed” using   the Engrosser script.  These Founding Documents of America in the the Western culture are considered “sacred”.

The Constitution is now a superstar in the news for it has been quoted several times that an Executive Order or an act can be “unconstitutional”.  Jacob Shallus the penman who used Engrosser Script on the 4-page parchment was only paid 30 dollars for his work.  Little did he know; technology worth millions will be used to protect his document.

To see the three Charters of Freedom in display, visit the National Archives where they are exhibited in the Rotunda. (CLICK HERE)

Enjoy the gorgeous holiday of May as letters merrily appear in your paper using oblique pen holder with flexible nibs, and ink.  You don’t need to be appointed by the President to get an engrossed document. Enroll and learn Engrosser Script.  The author has an engrossed document at home made for herself the title “Special Assistant to Myself”.

Among the pointed pen hands, Engrosser’s Script stands out for its elegant strength and formality; it has been used to inscribe presidential appointments for over 100 years, and is the primary script hand used in White House entertaining.

Learn the mechanics and finer details of this classic American hand with former White House chief calligrapher, Rick Paulus. Beginning with an informative observation of a wide breadth of pointed pen style hands and the tools employed in their creation, we will then narrow our focus as we assemble our pens and put them to paper! Inspired by the Zanerian School’s “Roundhand” or “Engrosser’s Script”, we will begin by practicing the surprisingly few basic strokes required to create a miniscule alphabet. After a series of exercises designed to familiarize the eyes and the hand to these newshapes, we will move on to majuscule letter forms and numbers, thus laying a solid foundation to developing an elegant script hand. From there, it is a mere 9,996 hours of pure calligraphic joy until mastery is achieved!!

Oblique pen holder. Note: participants are encouraged to purchase pen holders with adjustable brass flange and to avoid the much simpler, yet poor performing rigid plastic flange. If money is not such an obstacle, you will find the wood pens much more enjoyable to hold and work with!
Ink: Higgins Eternal or Sumi-e
Marker layout paper — Bienfang, Borden & Riley, Canson 360, etc. (any size)
ruler
Pencil
eraser
table-top desk/lapboard (aprox 18” X 24”, masonite, two pieces of foamcor, plexiglass, etc)
Notebook
text from which to work in the form of: a short poem, an invitation, a menu, or some such copy.