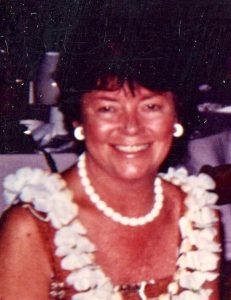 In the presence of her family, at rest in South San Francisco from complications of pneumonia: Terri Mullin, beloved and loving wife of Eugene Mullin for the past 51 years; cherished mother of Jennifer Fisher (David) and Kevin Mullin (Jessica); dear sister of Bernadette Jacobson, Anne Withers, Martin Carrick (Pam) and the late Imelda Carrick, Mary Carrick and Marian Carrick.

She was the adored grandmother of Austin, Jonathan and Colton Fisher, and took great pride and satisfaction in their many accomplishments. She was the dear aunt of many nieces and nephews. Daughter of the late William and Annie Carrick, she was a second generation native of San Francisco and a graduate of St. Vincent High School, class of 1954. She was a secretary for the Prudential Insurance Company for 12 years before leaving to raise and nurture her family.

She loved spending time at the family’s Russian River and Lake Tahoe cabins. The couple celebrated many special events in Hawaii, including their 50th wedding anniversary in the company of their entire family. She was very supportive of her husband’s and son’s political careers and was proud of her daughter’s success in balancing motherhood with a demanding career. When she wasn’t rooting for the Giants and Warriors, she enjoyed spending time with the pets that held a special place in her life. Terri was a kind and compassionate person with a keen sense of humor, and she will be deeply missed by her family and her wide circle of friends, many she’d known for more than 70 years.

A memorial Mass will be held at St. Veronica Church, 434 Alida Way, South San Francisco on Tuesday, April 18th at 11:00 am. A reception and celebration of her life will immediately follow at the St. Veronica Parish Center. Interment will be private. In lieu of flowers, the family prefers contributions in her name to St. Anthony’s Foundation, Peninsula Humane Society, or a charity of your choice

Please CLICK HERE to leave words of sympathy for the family