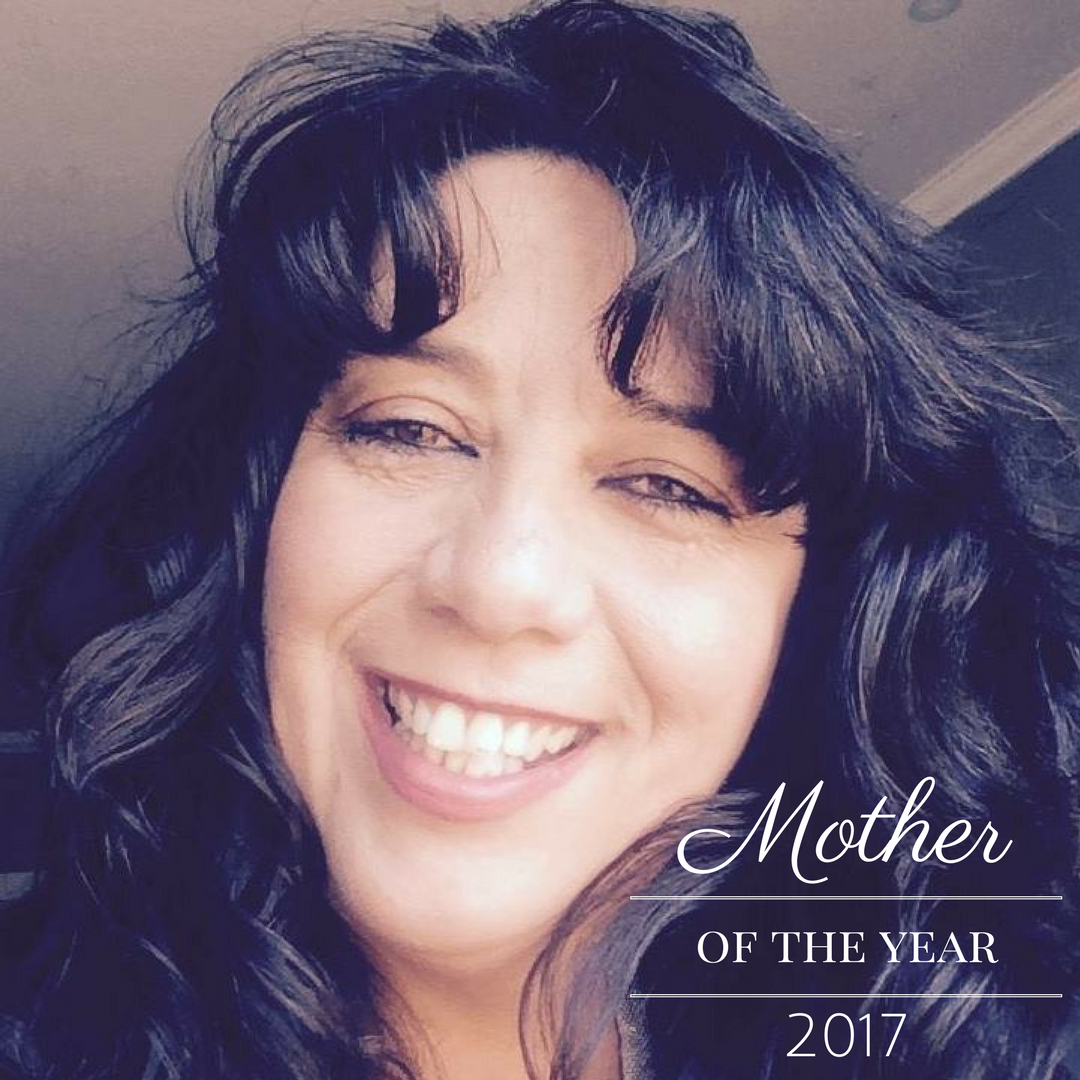 Mother’s Day, a tradition dating back to the Greeks and officially declared a holiday in this country in 1911, is a day we traditionally celebrate the loving maternal influence in all our lives.

Having met so many wonderful mothers here in South San Francisco, we at Everything South City thought that one way we might contribute to this celebration is by honoring one special mother and, when you read Natalie Cedeno’s story, I think you’ll see why we named her our  Mother of the Year. As a single mother actively raising four beautiful and successful children she is an inspiration and example to us all.

Natalie is originally from Utah, and settled on the West Coast after being assigned to the Presidio while finishing up eight years in the military. Recognizing the added difficulties of raising multi-racial children, she tells us, “I grew up in a very small town and Utah does not have a lot of diversity and I wanted to raise my kids to be accepting of all ethnicities, race, religion, sexual orientation and Utah is not a blending pot to say the least. My last duty station in the Army was at Presidio of San Francisco, so that is how I came here and where I felt it best to raise my then two children, both bi-racial boys.” Natalie’s part-Latin girls came a little later which only further convinced her that her decision to re-locate was a wise one .

Natalie makes it very clear that her kids are her main focus in life and that everything she does is for them. And the one thing that brings them all together is sports……more specifically basketball, a sport all four kids excel at. With her immediate family living so far away in Utah, she felt one way to create shared memories as a family was through their mutual interest in sports. “Basketball was really our family focus and still is.” Natalie told us. But sports isn’t the family’s only focus as each of her children excel in academics as well.

She is so devoted to her children that Mother’s Day is more important to her than her own birthday. “It is a special day that she celebrates us, her kids” her daughter Brittany told us. “She treats us, she won’t let us treat her!”  As the driving force, cheer leader and support for all the accolades her hard working kids have achieved we believe it is time for our community to recognize this amazing Mom for all that she does. Happy Mother’s Day Natalie – thank you for guidance, direction, devotion to your children and creating such amazing young adults. YOU deserve to be recognized for all that you do!

Now lets take a moment to meet each of Natalie’s kids. This is what was going on in their lives when we last spoke with her a while back. The way things move so quickly these days, we’re sure they haven’t stopped growing and achieving since then. 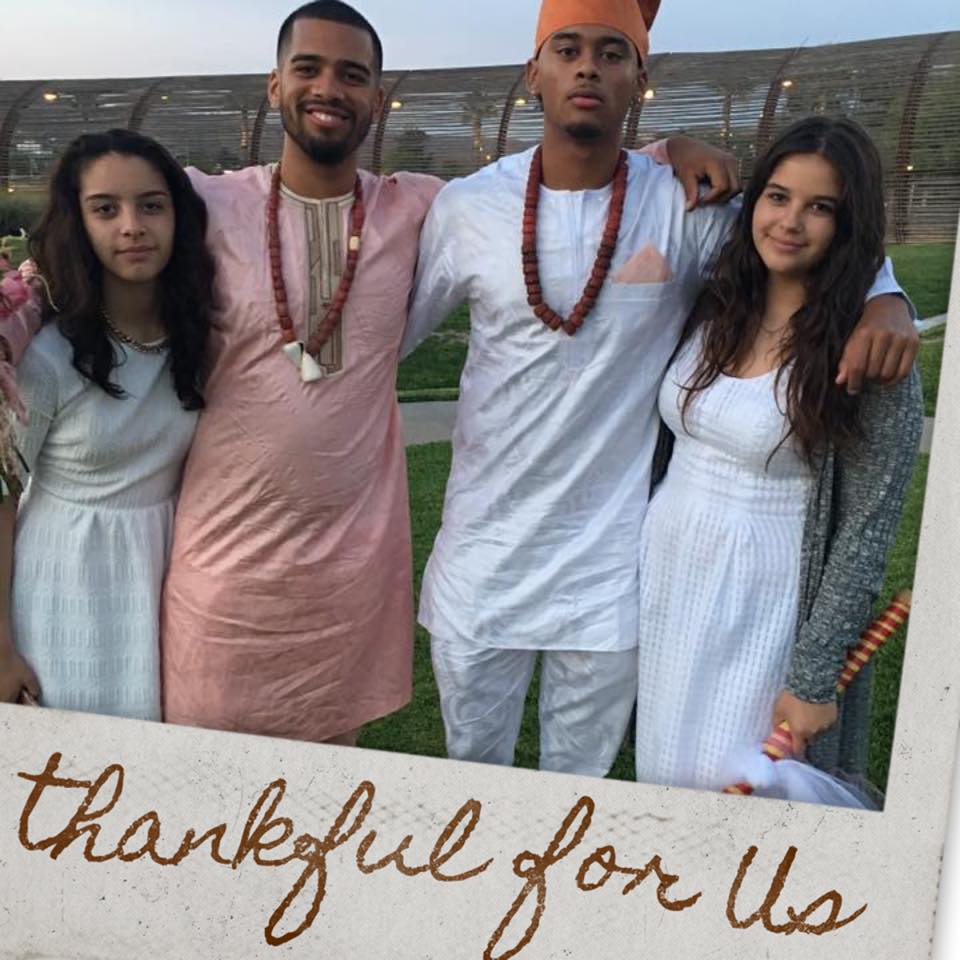 Anthony Smith
The oldest son, Anthony at 25 years is a graduate of Howard University with honors in Psychology and has received his masters from Sacred Heart University in Connecticut with honors. He graduated from El Camino High and Skyline before going to Howard. He played basketball for Howard and then quit at the beginning of senior year because he wanted to take double credits of 24 credits per semester to graduate and start his masters. He is now working for Joliet College in Chicago while waiting to get into DePaul University PhD program. He lives in Indiana with his wife Tamekia and their sweet baby daughter Yahya.

Michael Smith
Michael, the second child at 21 years old went to El Camino and now attends Cal Baptist University and plays basketball for them while majoring in Business. He has a 3.5 GPA and was named the PacWest Player of the year, PacWest MVP, NCAA DII West Regional First Team, All-West District first team and an All-American by the National Association of Basketball Coaches along with his CCA All-American honorable mention. Says Natalie, “He has always been super competitive even as a young child. I love when public school graduates get awards that can show others a private school is not the only place to be successful.”

Brittney Cedeno
The third child, Brittney, attends South City High School. She also has a 3.5 GPA and has played basketball since she was 6. “She played basketball and soccer at a very early age on boys teams because I wanted her to compete with kids that were better than she was. She is a sophomore but her first year at South City. She was very fortunate to be named PAL North MVP, San Mateo Player of the Year, San Jose Mercury News 2nd Team and San Francisco Metro Honorable Mention. She went to SC instead of El Camino because she did not want to be in her brothers shadow.”, Natalie told us. More recently Brittney has officially committed and accepted a full ride Athletic Scholarship to play basketball for her brothers alma mater, Cal Baptist University in Riverside CA after she completes her senior year in 2018.

Savannah Cedeno
Savannah the youngest and attends South City High School. “She also plays basketball and calls it the ‘family business’. She has received high honors and is really looking forward to excelling in her high school athletic career. She was at Alta Loma before SC, and was their student body president. She also has an interest in Debate.” 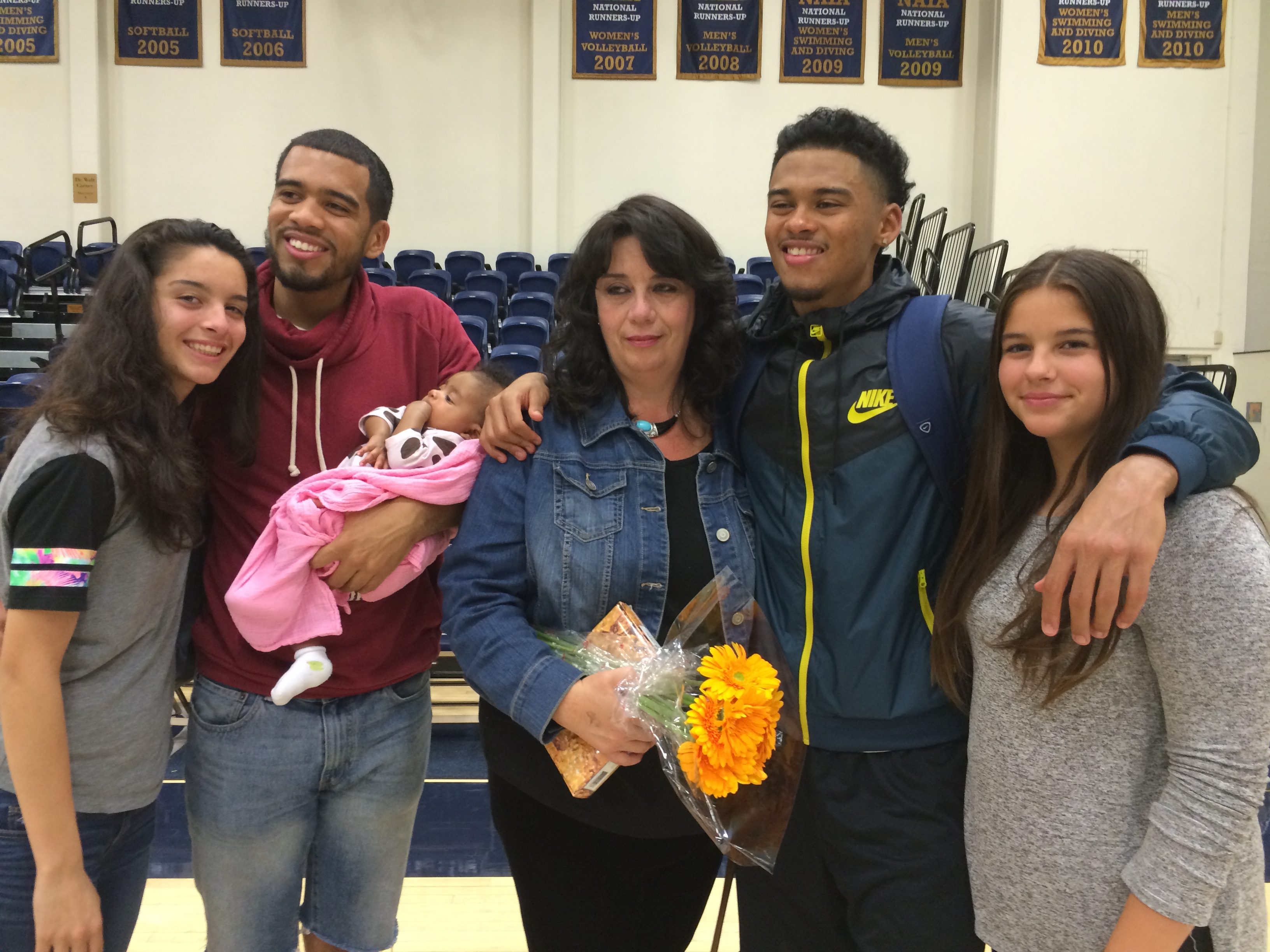 Brittney, Anthony, granddaughter Yahya, Michael and Savannah, with Natalie front and center as she always is.

With such successes, it’s worth hearing in her own words, Natalie’s philosophy of raising the children. She told us the following:

“It is priorities. I am a very social person but I do not have a social life because I will not miss the kid’s games. I gave up two Vice President opportunities because I would not travel. To raise kids is hard and god knows I have learned more and more along the way. I don’t feel I have done anything special because most mothers put their kids first.

“My career also allowed us to live a middle class life and I was quick to point out to the kids the importance of education which would give them independence and pride in their accomplishments. I hug and kiss them all the time and I make sure they know they are loved and respected. I try to listen open minded but fail often. I also try to be calm, but fail. I apologize when I could have reacted better and while I know and appreciate they are great kids, I know I am blessed because I am far from a perfect mom but I strive to be the best mom I can be.

“I wanted my kids to see me at their games, taking them to practice and sitting with them to know their friends, where they were and because I worked long hours at time, I wanted open and frank discussions. The most important thing I felt is for my kids to see and respect me as a mom and not think I wanted to be their friend. Too many parents are walking around dressing and acting like teenagers because they wanted to be the cool parent. I always wanted to be the parent the kids could depend on. I would always tell them that having a mother is better than a friend because I will always be there in good or bad and it is unconditional.

“The kids were naturally athletic and Brittney especially excelled in basketball and soccer but due to tearing all the ligaments in her foot, she had to choose one over the other after her surgery. I had them playing early on and I was the one who was in the stands watching every play closely and keeping track of stats which sometimes drove them nuts when they were younger, but now they see the importance of striving to do the best you can. I would not allow them to quit and when the boys were in high school and scouts were coming around, the boys sent them to me instead of their coaches and they agreed that no one would get the best for them than their mom because to me, a college education was expected and the kids were raised thinking not just “will I go to college” but “where will I go to college.” I wanted them to have opportunities and to be able to support themselves. My boys are part African American and my girls are part Latin and I wanted them to not see race but to see opportunities.  I made sure to stay involved with their teachers because I wanted any behavior problems nipped quickly so the kids knew I better behave or my mom will come to the school. I also wanted no excuses from the kids because of race why they could not accomplish anything they wanted.”

Very strong words that indicate Natalie is not only a very devoted, involved mother, but one who is very progressive and forward thinking as well…..and who’s expectations are very high indeed. Describing herself she says:

“My main focus was my kids and my career. I am the Director of HR for a high tech software company Coupa Software and before Coupa I was the VP of HR for United Way. While my career was important to me, I was very serious about being the involved mom.”

What an inspiring person is Natalie Cedeno and, like so many mothers, she thinks not of herself, but only of what’s good for her children and what she can do to help them lead successful and fulfilling lives. And that is why she is our Mother of the Year!

Everything South City was happy to gift Natalie a certificate for the whole family to come together and enjoy dinner at The Garden Club because we know spending time with her family is her greatest joy. Knowing she deserves something special just for her, an oversized basket filled with speciality items from La Bouqueitiere will be presented to Natalie today by her daughter Brittney on our behalf.  Happy Mother’s Day Natalie!

1 comment for “Natalie Cedeno Named ESC Mother of the Year”