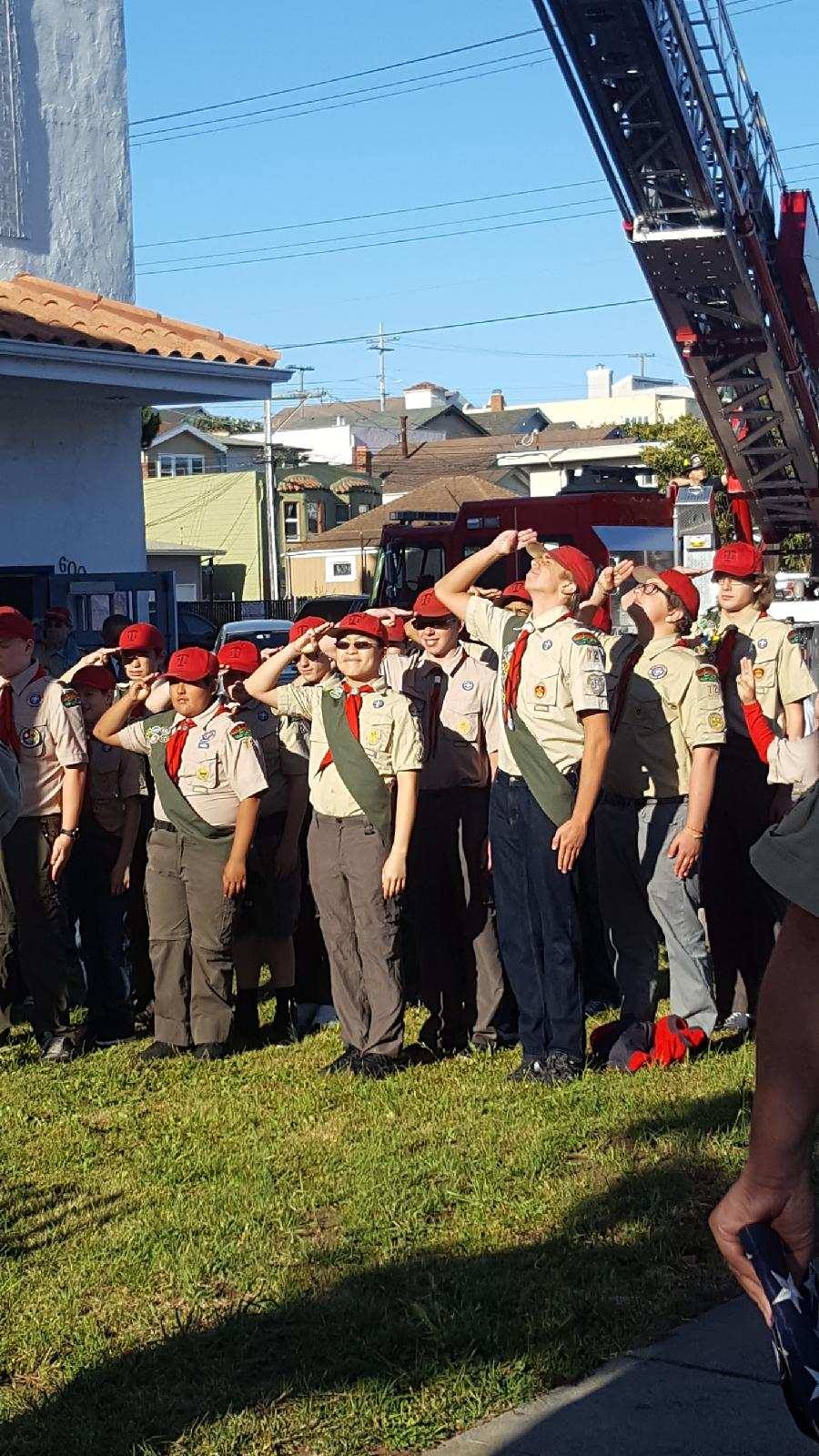 Boy Scout Troop 72 saluting the flag after being repaired and raised by SSFPD and SSFFD.
Photo: Davida Dean

After years of vandal attacks, the South San Francisco Police and Fire Departments have assisted in repairing lanyard and flag pole that sits in front of the First Baptist Church at 600 Grand Avenue. This flag pole had been donated by the South San Francisco Veterans of Foreign War Post 4103 as a remembrance to our veterans back in 1980 and sits next to the Last Watch Memorial which was recently established by Boy Scout Troop 72.

Vandals have cut the lanyard rope from the flag pole and removed the US flag on a number of occasions through the years. Due to the height of the pole the Church has been unable to repair or replace the lanyard properly. The South San Francisco Fire Department, using the ladder truck, were able to re-thread the lanyard with metal which will help reduce any future damage.

After securing the flag a ceremony dedicating the Last Watch Memorial was held and our US Flag  was ceremoniously raised and is once again proudly flying. Two short videos of this ceremony can be viewed  CLICK HERE and  CLICK HERE thanks to Davida Dean.

As Memorial Day is fast approaching the good deeds demonstrated by our police and fire personnel in restoring our flag and being part of the Last Watch Memorial  dedicaiton is greatly appreciated by all who pass by. In addition our BSA 72 continues to serve our local communities and once again will be participating in this Memorial Day Parade with the procession leaving SSF Fire Station 61 (North Canal) at 10:30am and arriving at the Eternal Flame at Orange Memorial Park at 11am at which time a ceremony will be held. MORE INFO CLICK HERE

Past acts of service done by this troop include a blood drive, a 1st Responders Memorial, backpack hooks for an elementary school in San bruno and garden boxes for a kindergarden in Millbrae,  over 400 community service hours. This past Saturday they were tasked with setting graveside flags at the Golden Gate National Cemetery for the Memorial Day ceremony Monday CLICK HERE  for more info on that ceremony.

Troop 72 received its first charter from the Boy Scout of America in May 1917 and are one of the longest running Scout units in the Bay Area, having been in continuous service since 1922. They meet Thursdays at 7pm. For more information on this troop CLICK HERE 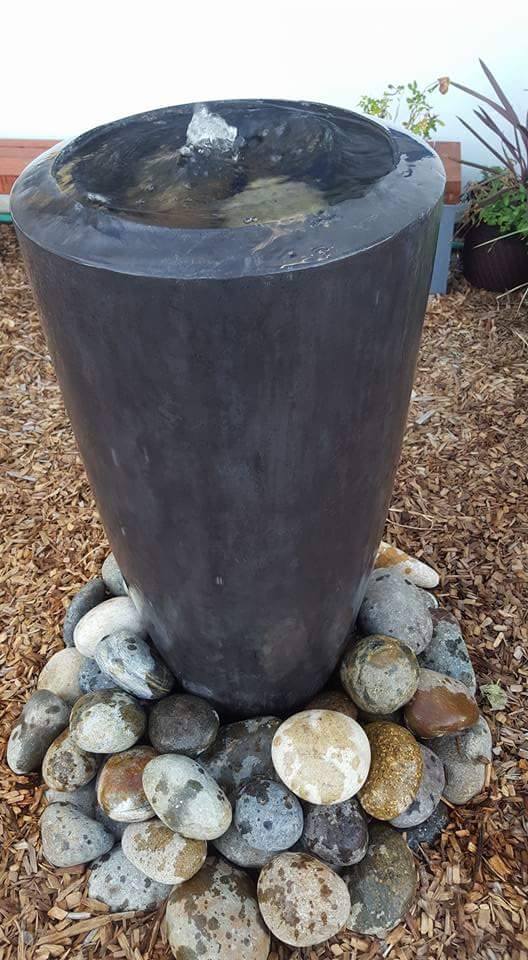 This fountain is the cornerstone of the Memorial for First Responders located in the front yard of the Baptist Church 600 Grand Avenue and is part of the service work of BSA 72 Photo: Davida Dean 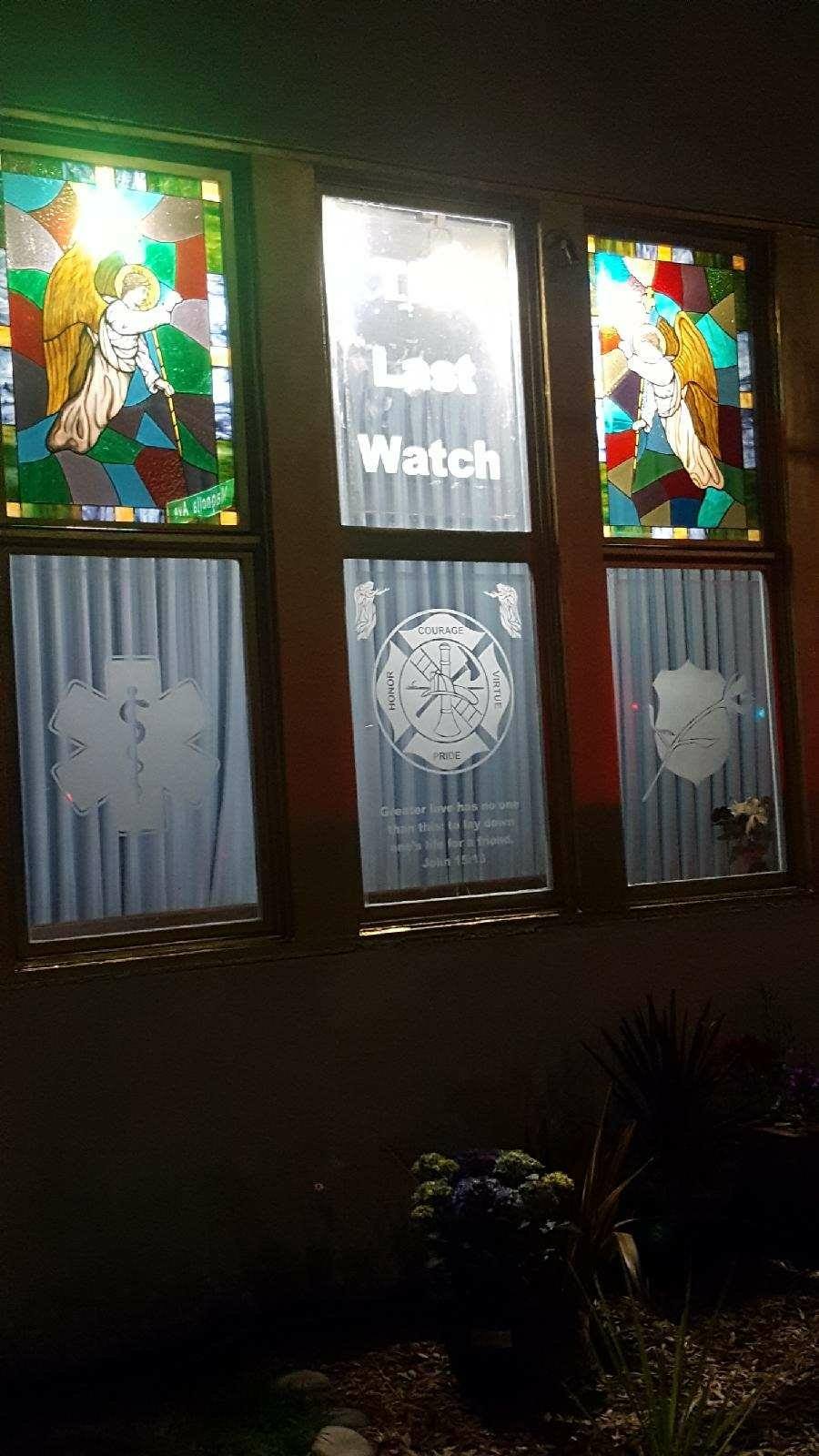 The Court of Honor recognizing the 4 Eagle
Scouts of BSA 72 and all those who earned merit badges Photo: Davida Dean