The campaign has a strong public education aspect through television, radio, and social media notifications, but also includes saturation patrol enforcement.  During the month of April, South San Francisco Police Officers from the Traffic and Patrol divisions issued a total of 222 distracted driving citations to motorists.  The most prevalent citation issued was for using a cellular telephone without it being handsfree.

Since a revised law went into effect in January, adult drivers are prohibited from driving while holding a cellphone in their hand for any reason.  However, if the cellphone is used in a hands-free manner, such as voice command or with the use of a mounting device, it is completely legal.  While driving, you can single swipe or tap the screen to activate or deactivate a feature or function, but you cannot text, scroll or tap multiple times.  Drivers under the age of 18 are prohibited from using a cellphone at any time, regardless of whether its handsfree or not.

This law is designed to prevent distracted driving and to help make the roadways in South San Francisco and throughout California safer.  Although the monthlong special awareness campaign has ended, officers will continue to diligently enforce distracted driving laws all year long.  Please remember, if you are driving with the phone in one hand, then you are likely to end up with a ticket in the other. 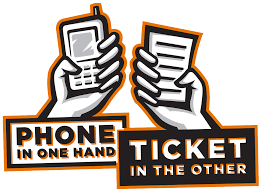 The following facts are from OTS and NHTSA: