Sergeant Explorer Arianna Realyvasquez has volunteered more than 1,100 hours for the SSFPD 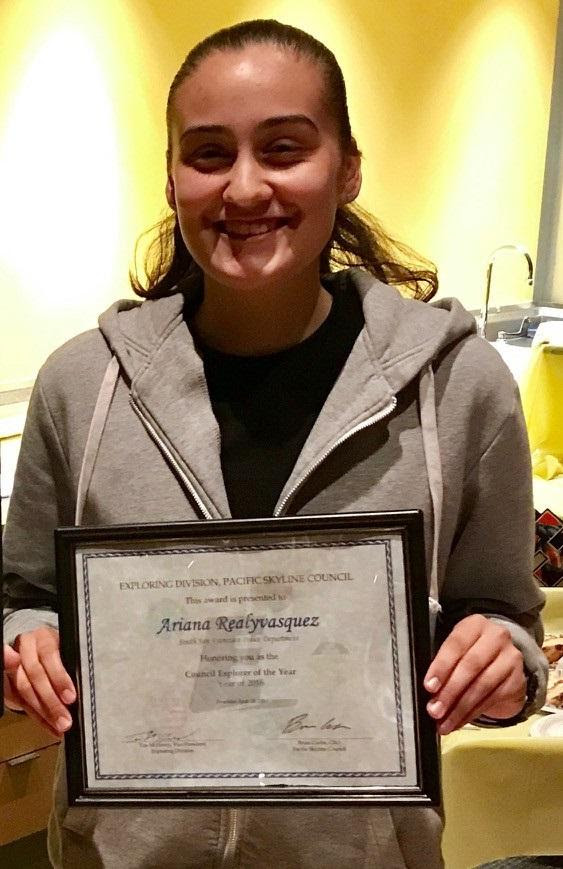 It’s often said, one of the greatest gifts you can give is your time, and for Sergeant Explorer Arianna Realyvasquez, she has given the City of South San Francisco, and our community, a great gift. Recently, she received the 2016 San Mateo County and Pacific Skyline Council Explorer of the Year Award during an Explorer Academy graduation ceremony.

Sergeant Explorer Realyvasquez hails from a family in law enforcement, so it’s no surprise that she is studying Criminal Justice at Skyline College. She has been a Police Explorer for four years and has been to several National Explorer Conferences, and has also served as a mentor/instructor, called a “Red-Shirt” Squad Leader, at the Police Explorer Academy.

There are many roles a South San Francisco Police Explorer fills, including “Ride-A-Longs” with police officers on their beats, helping to fingerprint children, assisting the department’s Records and Communications section, and assisting with safety programs and crime prevention in the community.

“We need more people like Arianna and want to encourage local youth to participate in the South San Francisco Police Explorers Program as it offers real-world experience in law enforcement,” said Chief Azzopardi.

Interested in law enforcement? Want to serve your community? Then being a South San Francisco Police Explorer may be just for you! Some of the requirements are below:

For those interested in applying for the South San Francisco Police Explorer Program, please call the SSFPD’s School Liaison Officer at 650.829.3924. Also, be sure to check out their new Instagram page and stay in touch with what the Explorers are doing.