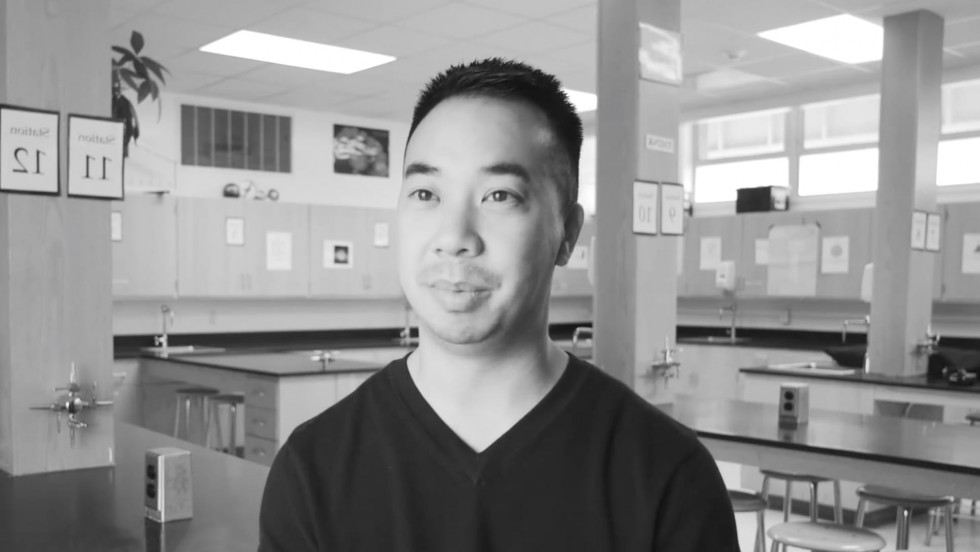 Growing up in the city of South San Francisco, Michael Tom never liked science. In fact, he says, it was his least favorite subject in school. According to Tom his teachers worked straight from the textbook, which never caught his interest. Concepts were simply conveyed by “always reading out of a textbook,” he says. But, “I hated reading. I wasn’t a great student. I was a total black sheep.” So it would surprise anyone to learn that today Michael Tom is an eighth-grade science teacher at the same middle school (Alta Loma Middle School) where he struggled as a student, and that he’s working hard to bring science to life for his students.

“I definitely did not ever consider being a teacher,” Tom says. After college, he was a bit listless while looking for the right career. “I had no goals,” he says. He considered being an engineer or an orthodontist, but neither profession seemed realistic. The job market in those fields, he had discovered, was spotty at best. So instead he picked up a gig working with an organization that educates kids on teen pregnancy. “I was going into classrooms and talking to students and that was the first experience I had with teaching. It was my “A-Ha!” moment. The students in the classroom didn’t care what I had to talk about. The cool kids in the back were slouched in their seats. But as I was talking they started perking up and asking questions.” Tom realized that he might have a knack for engaging students — even when they didn’t want to be engaged. He was young, just out of school, and his style of teaching wasn’t what most kids expected from their teachers.

Inspired by this moment, he started substitute teaching and taking classes to earn his teaching credentials from San Francisco State University. Eventually, Tom landed a job at the school he went to as a child. Determined to find a way to make science interesting for his students, Tom took a course at The Exploratorium (San Francisco’s museum of science) on how to use hands-on methods to teach science. “It’s cool to be able to be on the other side now,” he says. “I was sitting in these desks and now I’m talking to the kids from the other side as the teacher. Some of the students I have been getting are kids of my friends I went to school with.” And he is determined to make sure they learn science in a way that will stay with them throughout their lives.

I was sitting in these desks and now I’m talking to the kids from the other side as the teacher. Some of the students I have been getting are kids of my friends I went to school with.

“Everything I teach I feel like I learned on my own for the first time. I don’t remember any of these things from being a student in school,” he says. Tom designs all the curriculum himself, so lessons can be tailored not only around subjects the kids should learn, but also around collaboration, experiences, engaging activities, and evidence-based experiments. “I can help these kids learn the way I didn’t learn.” That old way, he says, “was always reading out of a textbook.” The lessons those reading materials taught him were ones he quickly forgot. Working in a lab, actually conducting experiments, he says, allows students to feel like they are a part of making science happen. And active learning will help them remember well into their future — just like everyone remembers the first time they were asked to dissect a frog.

It’s this way of teaching — and learning — that seemed to fit so perfectly when Genentech came to Tom’s school and asked for teachers to volunteer in helping them develop The Helix Cup. The competition, which involves all of the eighth graders in the South San Francisco school district, asks students to team up and compete to solve challenges involving a number of STEM disciplines. Tom and his hands-on teaching methods were a key driver in creating the program. The competition, he says, is “a great way to [give students] the autonomy to figure out how to solve real world problems.”

The biggest benefit he has seen since watching all of his students participate in The Helix Cup, Tom says, is how it benefits the students who aren’t so engaged with learning. The kids who benefit the most are are, like he was, “not successful typically in the academic class. They need to do the hands-on things and tinkering.” In one case, a student who wasn’t actively participating, but instead chatting and generally goofing off, started tinkering with the assigned task on her own. The design concept she engineered ended up beating the designs of all her classmates during competition. “I was so proud of her. I talked to all of my classes about it,” Tom says. “I think that’s probably the highlight of her eighth grade and something that she’s gonna be able to carry on with her.” And perhaps his pride was in himself as well. Both Tom and his successful students have proven that hands-on learning experiences can bring the academic out of the least likely candidates. Science, it turns out, isn’t only for overachievers.