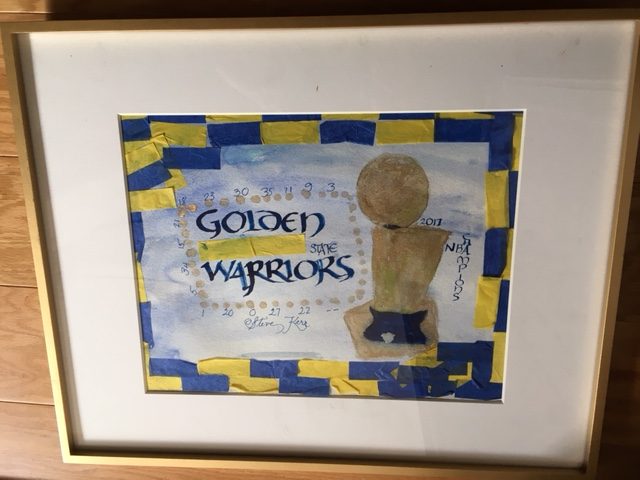 After a celebration, a championship parade, confetti are cleaned up and thrown into trash bin Neverland to be forgotten but not for an artist. Some of the confetti are appearing as part of the SSF General Art Show at SSF.

The author  has three pieces and one of them celebrates the Golden State Warriors, 2017 NBA Champions with real blue and gold confetti from parade in Oakland last June 15. The other two are Fugue for saying I love you and thank you in 51 languages from around the world. A fugue is an interweaving melody saying the same thing in another line.

“Are you going to write a poem for the Warriors like you did for the SF Giants? asked friends

The Golden State Warriors Team is dubbed  as a “superteam and a juggernaut” that sends electric chills to the spines of other NBA  Teams.

Well, the Warriors aside from getting a poem “June is in Love with Blue and Gold Confetti”, their confetti are turned into an art form.    I’d never been “Confettized”  in my entire life because I stood right under the GS-Genie 3462 Conffetti machine blower while players floats passed by . People had occupied the streets’  sidewalks at 5 am . The crowd were  bigger than 2015.  I tried climbing the confetti platform to see a better view of the parade, the operator said, “Don’t you dare climb in here!”. Later he gave me a plastic bag of unused confetti. I  collected some confetti last 2015  but was only stored in the closet.

I learned something new, you don’t need a number at your back to be a professional player, Jordan Bell, Power Forward has no number –, and  you can wear 0 like Patrick McCaw, Guard. The most popular floats belonged to Stephen Curry, 30; Klay Thompson, 11; Kevin Durant 35; Draymond Green, 23. I learned confetti is already a plural of confetto meaning small bits of paper.

When the crowd chanted Curry! Curry! MVP , I stepped forward with my camera and didn’t  know it was a curb step down area, stumbled but luckily two strangers picked me up. Baseball greats like Barry Bonds and  Ricky Henderson were in the parade.

I saw Marine commandos on the side of the streets which were not captured by media. 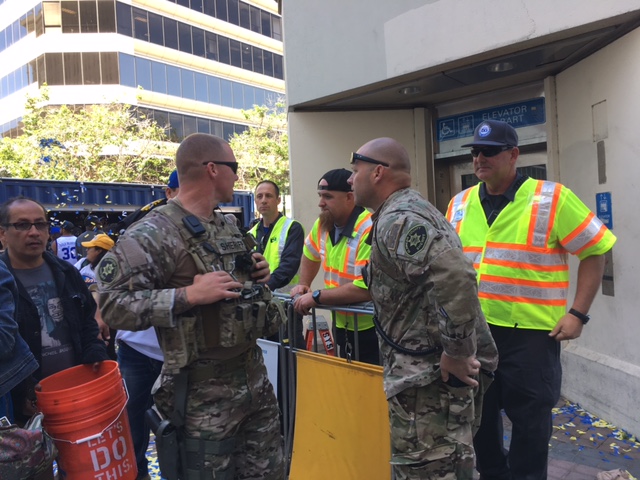 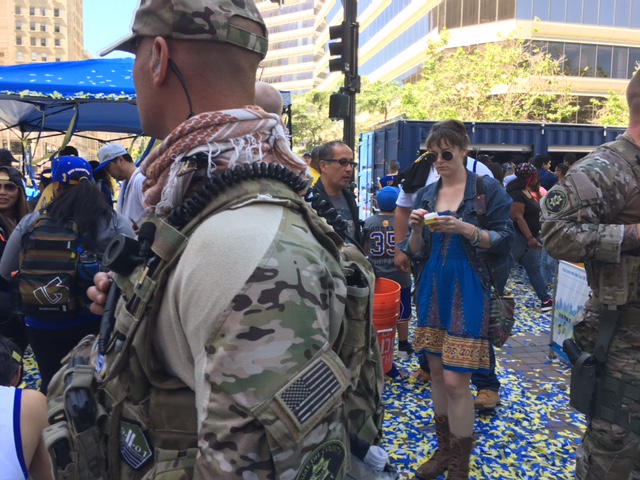 The Blue and Gold are dear to my heart. In the 1990’s, I was The Blue and Gold editor for an Archconfraternity of Our Mother of Perpetual Help which at that time had 13 million devotees . Also, I composed a song “The Lady Who Wears Blue and Gold” that debut at the St Alphonsus Church that has original icon(known for her miracles)  at Rome, sung by 52 OLPH choir members. The song has  been sung internationally during novenas. Locally , it is sung at Daly City OLPH and Holy Angels parishes.

The feast  of the Our Lady of Perpetual Help, the Lady who wears Blue and Gold” is every June 27th of the year.  As Stephen Curry smilingly said during the parade celebration , “We plan to do this every June.”

If you want a music sheet copy to use for your novena, email Elizabeth thewaytorite@aol.com 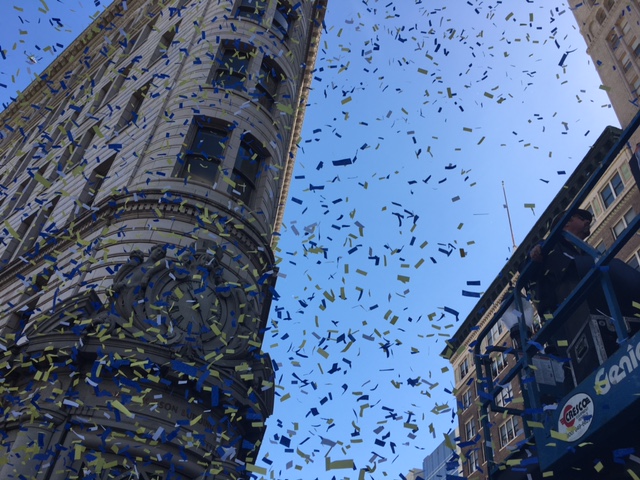 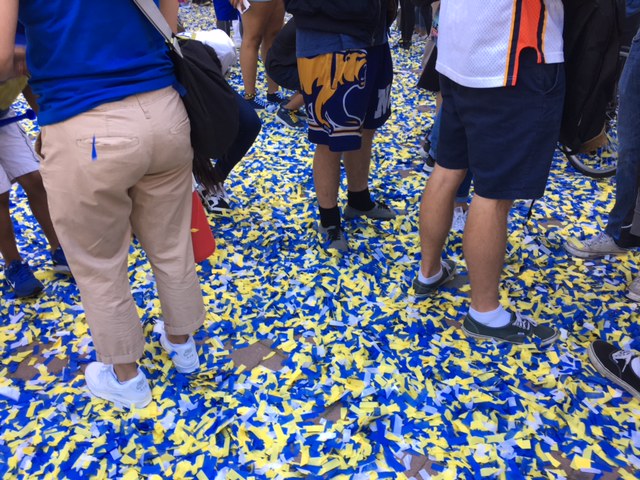