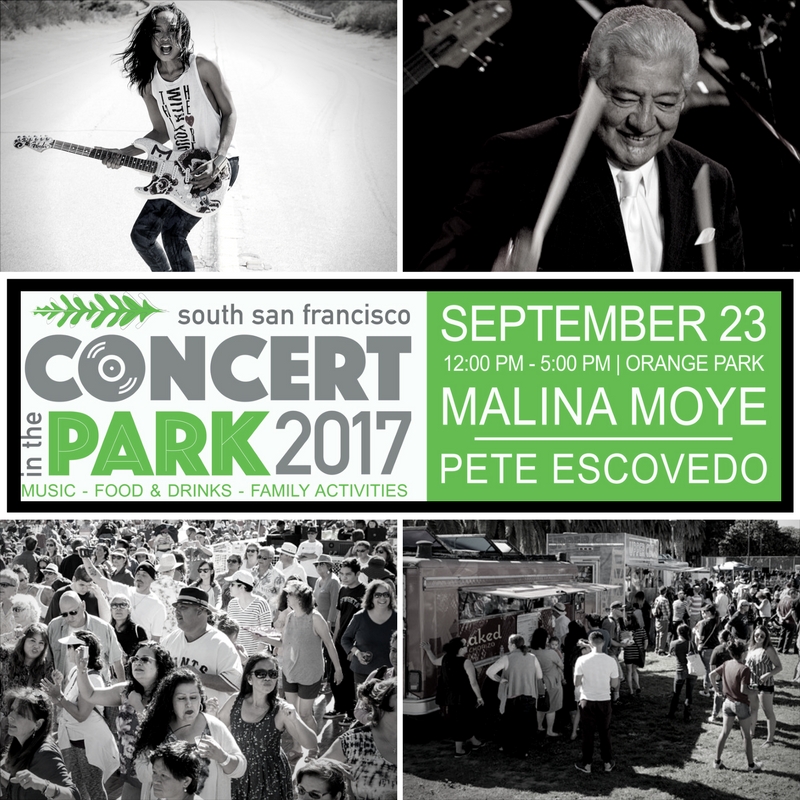 Concert in the Park Featuring Malina Moye and Pete Escovedo

The South San Francisco Parks and Recreation Department is pleased to present the third annual Concert in the Park on Saturday, September 23, 2017 from 12pm to 5pm on the soccer field at Orange Memorial Park, located on West Orange Avenue at Tennis Drive in South San Francisco. This year’s Concert in the Park will feature two stages to entertain audiences. Attendees will enjoy music by headlining act, Malina Moye, and legendary percussionist Pete Escovedo, as well as performances by local high school jazz bands.

This fun and free family-oriented community event will also feature activities for all ages including dancing, bounce houses, and an indoor children’s play area. Hungry concertgoers can look forward to enjoying a meal from a variety of food trucks and some fresh treats from the South San Francisco Farmers’ Market. Beer and wine sales will be available by the Friends of Parks and Recreation, a nonprofit volunteer citizen’s group organized to support parks and recreation activities in South San Francisco.

Flipping a Fender Stratocaster upside-down, acclaimed singer/songwriter/lefty guitarist Mailina Moye fills a void in the entertainment industry. Lauded as a musical pioneer and one of the world’s top female guitarists by Guitar World Magazine, Ms. Moye has carved out her own lane in today’s music scene as one of the few artists in history to straddle both Rock and Soul genres. Malina Moye’s musical narrative boasts an impressive and unique resume that includes making history as the first African-American woman to play the National Anthem on guitar at a professional sporting event, all the way to performing at the Rock & Roll Hall of Fame tribute concert for music pioneer Chuck Berry. And recently, Ms. Moye honored the Queen of England by playing “God Save the Queen” at the Goodwood Festival of Speed for the Queen’s sixty-year jubilee. Ms. Moye has “the talent, the look, the energy, the whole package,” declares Huffington post. Seventeen Magazine states, “On stage, Malina (Moye) delivers an intoxicating fusion of funk, Rock, and Soul.”

Pete Escovedo, toured internationally with the legendary guitarist, Carlos Santana, for five years and performed on three Santana albums: Moonflower, Oneness and Inner Secrets. Mr. Escovedo left Santana to follow in the musical footsteps of his mentor, the late Great Tito Puente, who influenced his music and decision to form his own orchestra consisting of a five-person horn section with strong rhythm and percussion personnel. In 2013, Pete Escovedo, was honored with a Jazz Tribute Award at the Los Angeles Jazz Society 30th Anniversary. He performed at the White House for President Obama and was requested to return for a repeat performance. In July 2017, Mr. Escovedo celebrated 62 years in the entertainment business and his 82nd birthday.

You can find more information about this event, and sample videos online at:www.ssf.net/concert