In recent times we have had discussions about our South San Francisco City Council elections and how our City is best served, by elections at large or has the time come for us to vote by district. {At-large is a designation for members of a governing body who are elected or appointed to represent the whole membership of the body (for example, a city, state or province, nation, club or association), rather than a subset of that membership. At-large voting is in contrast to voting by electoral districts. Wiki}

Michael Harris is one South San Francisco neighbor who has pursued this issue and has provided the following information regarding an upcoming meeting that will cover various election options and encourages neighbors to attend and to think about the possible need for district elections in the future. If this is something of interest to more South City residents we’d do well asking the presenters, Jennifer Pae and Steve Chessin,to host a meeting locally.  Please feel free to share your comments on this idea.

City Council Elections−How can we make them better?

Menlo Park has been threatened with a lawsuit over how it selects city council members, and the city of Santa Clara has also been sued. Whether your city elects members at large like Menlo Park, or uses a numbered seat system like Santa Clara, did you ever think about how the system could be changed to help election outcomes better reflect the will of the voters?
Learn what options exist for Menlo Park and other cities to elect city councils that are more representative of their populations. We’ll discuss pros and cons of district elections, and other election methods such as ranked choice voting and single transferable vote, so we can obtain election results that improve democracy and provide better representation.
Our presenters are Jennifer Pae of FairVote (FairVote.org) and Steve Chessin of Californians for Electoral Reform (cfer.org). Event sponsored by FairVote, a nonpartisan, non-profit organization championing electoral reforms to give voters greater choice, a stronger voice and a representative democracy that works for all Americans.
Date: Saturday 10/7/17
Time: 2 – 4 PM
Location: Onetta Harris Community Center Multipurpose Room 100 Terminal Ave, Menlo Park, CA

RSVP appreciated at bit.ly/fvmenlopark , or for more information please call Margaret Okuzumi at 650-269-4109 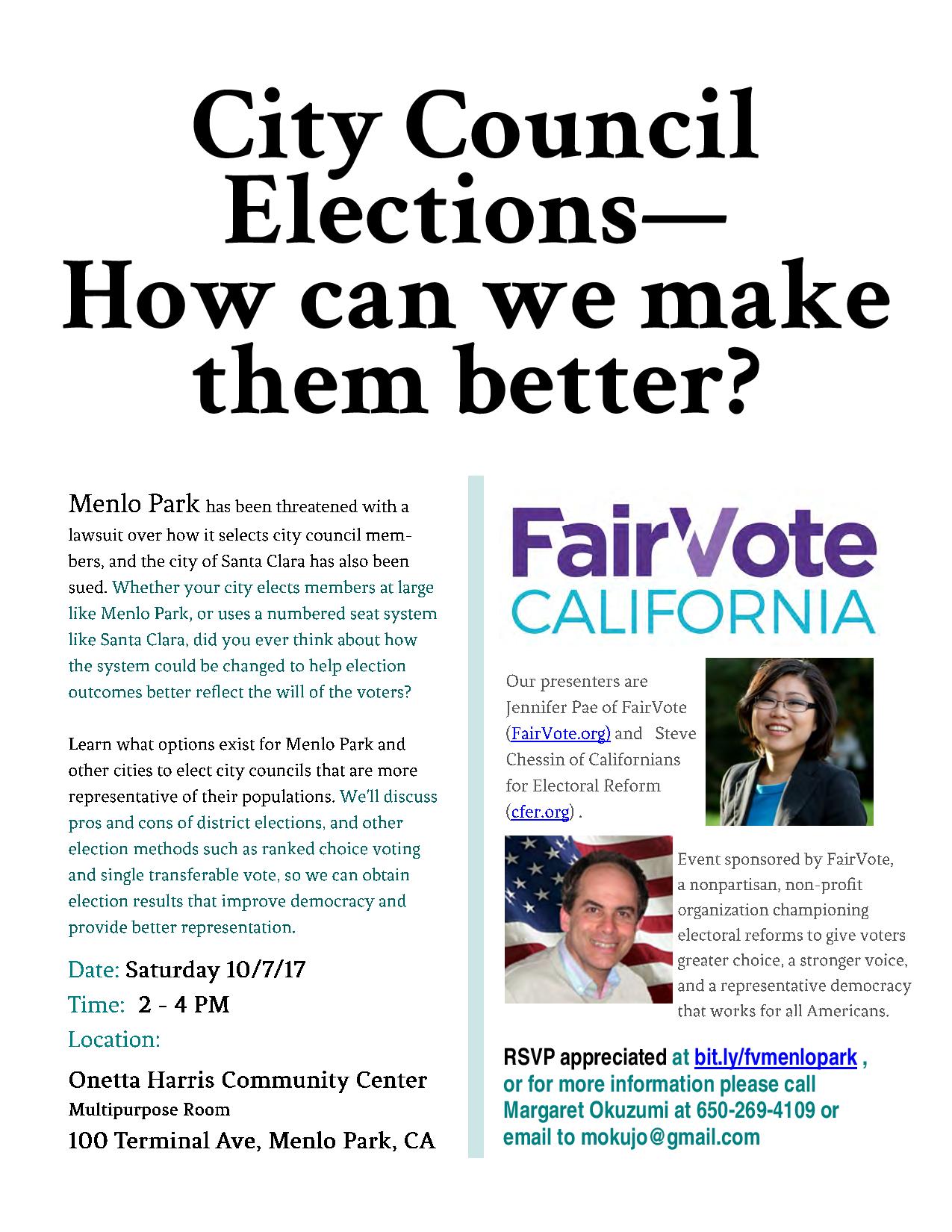 Our Mission: FairVote is a nonpartisan champion of electoral reforms that give voters greater choice, a stronger voice, and a representative democracy that works for all Americans.

What We Do: FairVote has a proven record since 1992 as a nonpartisan trailblazer that advances and wins bold electoral reforms at the local, state, and national level through strategic research, communications and collaboration. Today we are the driving force behind advancing ranked choice voting and multi-winner legislative districts that together will open up our elections to better choices, fairer representation and more civil campaigns.

Other pages on this site better capture our current efforts, but prior accomplishments include:

2 comments for “City Council Elections: At Large or by District?”