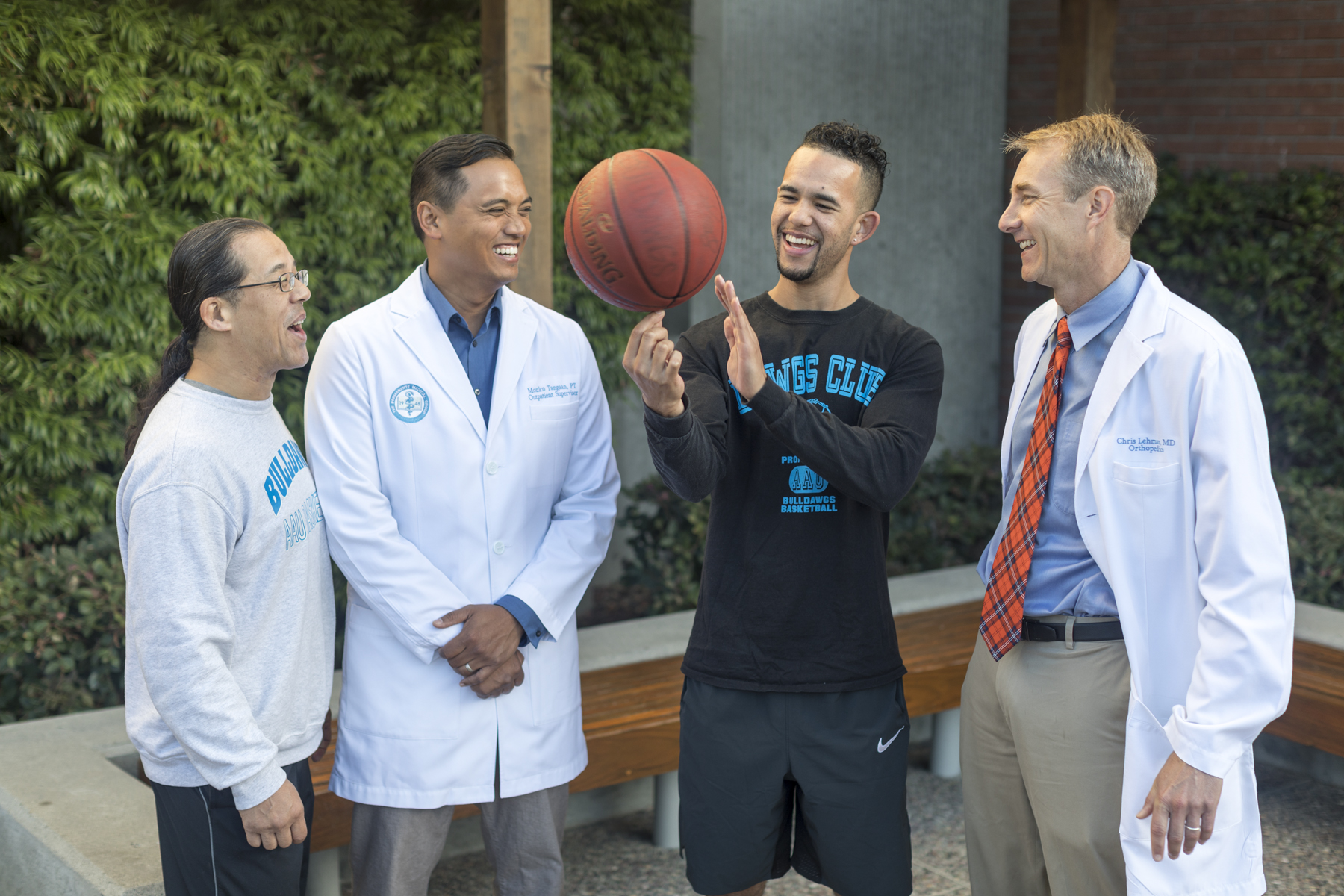 Alfonso and Stevie Joo, basketball coaches and father and son, both faced potentially career-altering injuries. But quick, personalized care from Kaiser Permanente got them back on the court. Pictured above, Stevie and Alfonso Joo with Dr. Chris Lehman and physical therapist Monico Tangaan.

For Stevie Joo, 26, it was a Sunday like any other: He was playing basketball with his friends at a South San Francisco gym.

But after a high jump, he landed oddly on a team member’s foot, and felt something pop in his right leg. He fell to all fours.

“I went to school for kinesiology and became a strength and conditioning coach, and I knew I had torn my ACL,” Stevie said. “I was more worried about the extent of the injury than the pain. Some people just don’t return to sports after that.”

Stevie’s dad, Alfonso, 54, took him to the Emergency Department at Kaiser Permanente South San Francisco. The next day, Stevie had an MRI.

The results confirmed that he had a torn Anterior Cruciate Ligament (ACL).

“I was devastated,” Stevie said. “My jobs revolve around sports and fitness, and I thought everything I worked for was gone and my career was in jeopardy. My dad and I run a youth basketball program, BullDawgs Basketball Club, and I wasn’t sure how I could be there for our kids.”

“Monico kept it real with me,” said Stevie. “He didn’t tell me it was going to be OK. But if I gave him 100 percent it would be possible to make a full comeback.”

After 4 weeks of physical therapy, Stevie’s surgery was scheduled for March 2016. Chris Lehman, MD, an orthopedic surgeon at Kaiser Permanente South San Francisco, reconstructed Stevie’s ACL in a procedure that is 30-40 steps and spans 2 hours.

All Kaiser Permanente medical centers across Northern California provide ACL reconstruction, but Dr. Lehman is among 20 surgeons in the region who specialize in complex or rare cases.

“We reconstruct the ACL using another part of the body to replace the ligament — for Stevie, we used the patellar tendon. I customize a patient’s ACL reconstruction to meet their needs with the goal of getting them back to full activity,” said Dr. Lehman.

The morning of his surgery, Stevie felt anxious. But as he was rolled into the operating room, he heard his name called: Both the Operating Room nurse and anesthesiologist had children enrolled in the BullDawgs, and recognized Stevie immediately.

After 2 weeks of rest and icing, Stevie got back in the gym with Monico Tangaan , and worked on his mobility and range of motion.

“Stevie was committed to the process from the beginning,” said Tangaan. “He was willing to do whatever it took to get back into the game as soon as possible.”

As Stevie recovered, Alfonso began to have difficulty walking; his knee hurt and would “lock up.”

Alfonso’s appointment with Dr. Lehman showed he had a torn meniscus, which often occurs after years of playing sports. He was quickly scheduled for surgery.

“My son was down, and then I was down,” said Alfonso. “We had kids who needed us. I thought, ‘What are we going to do?’”

Alfonso told Dr. Lehman that he had to run by April, when college scouting season began.

“I told him I’d be like Rocky Balboa: After surgery, I’d be on crutches, then I’d drop a crutch, then the other, and I’d take off running.”

Right before the surgery, Dr. Lehman put his cell phone up to Alfonso’s ear.

“He was playing the Rocky theme song. I’m like, ‘Yeah! Let’s do this!’” said Alfonso.

After surgery, Alfonso began physical therapy with Tangaan, too.

When the Joos think back on their recovery, they laugh, but also say they brought strength to one another.

“At night, we both iced our knees in the living room. We had our physical therapy back to back,” said Alfonso. “We were hand in hand in our recovery.”

Alfonso made his April goal to run again. And Stevie is now almost fully recovered.

“I can do all the things I used to be able to do. I can’t jump as high, but that will come in time,” he said.

“When you’re injured or sick, you may think that you’re done,” said Alfonso. “But if you put in the work, you can do anything.”