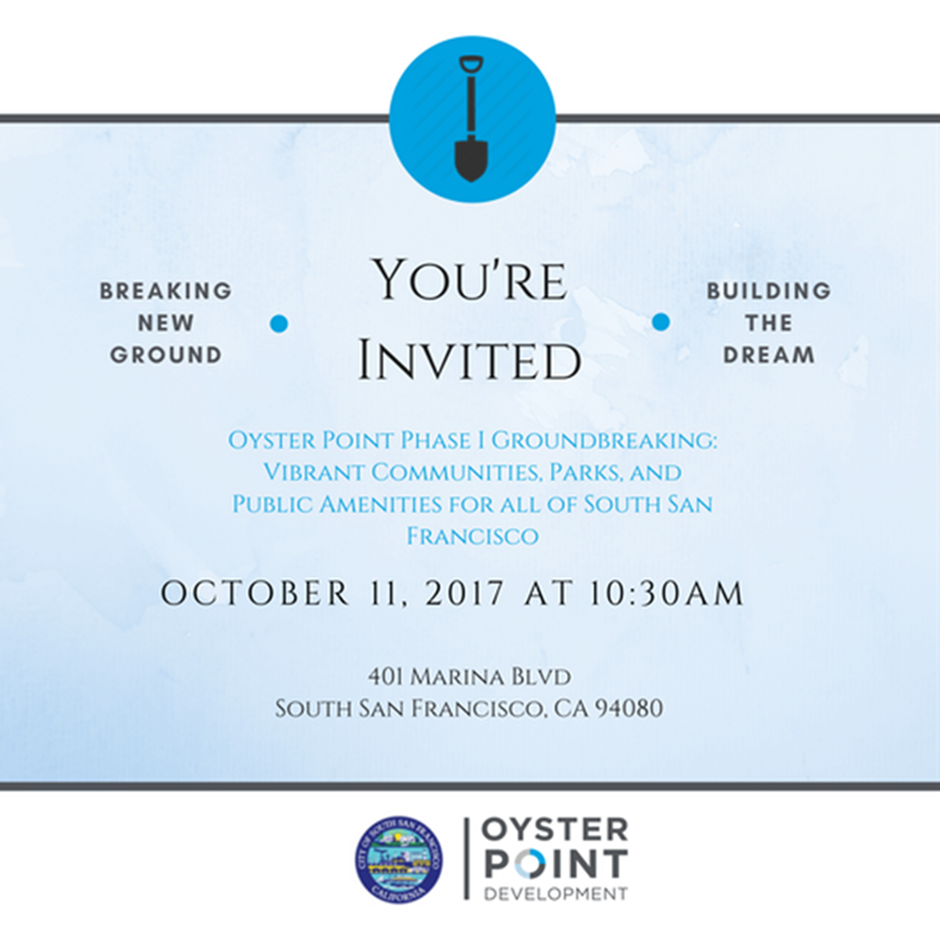 It is our pleasure to invite you to the October 11 groundbreaking ceremony celebrating the parks, public amenities, and communities coming to Oyster Point for the benefit of all of South San Francisco.
Please click here to RSVP. Should you require any additional information, please do not hesitate to contact me.
Best,
Ruby

Oyster Point Property not as rosy for development after all. Greenland Group and an all-mainland consortium of investors are poised to walk away from a $2 billion mega-project they purchased last year on the West Coast of the US – without having put a shovel in the ground. Selling to Los Angeles-based developer. This might put a stop to immediate development…

Greenland Group was once a leader of China’s outbound investment wave, snapping up nearly $19 billion in overseas real estate projects from Los Angeles to London over less than four years.

But the state-owned, Shanghai-based developer has reduced that nearly $5 billion a year in overseas deals down to zero in 2017. And now Greenland Group and an all-mainland consortium of investors are poised to walk away from a $2 billion mega-project they purchased last year on the West Coast of the US – without having put a shovel in the ground.

Oyster Point Development LLC – a joint venture of mainland investors Greenland Group, Ping An Trust, Agile Group Holding, and Poly Sino Capital – is in the process of selling the Landing at Oyster Point, a 42-acre waterfront site in South San Francisco, according to a report in the San Francisco Business Times.

The Greenland-led JV bought the site from local developers Shorenstein Properties and SKS Partners for a reported $171 million in August 2016, just when Chinese policy leaders began to focus on stopping the kind of outbound mega-deals that had given Greenland a presence in London, Los Angeles, Sydney, New York and other global gateway cities since 2013.

Greenland and its mainland partners have agreed to sell the 21-acre first and second phases of the largest remaining contiguous development site in the city of South San Francisco, California to Los Angeles-based developer Kilroy Realty Corp, according to the business newspaper, citing documents filed with San Mateo County. The NYSE-listed real estate investment trust has also negotiated a right of first offer to acquire the project’s third and fourth phases.

The oceanfront site was approved six years ago for the development of 2.25 million square feet (209,000 square meters) of office and life sciences buildings. The documents filed by Kilroy and OPD do not specify whether the sale of the first two phases has closed or whether an offer will be made for the later two phrases.

The filings also do not reveal the value of the potential deals, but they place a deadline of September 30, 2019 for the sale of the first phase to occur. The option on the third and fourth phases expires on December 31 of next year but can be extended.

Is Greenland Gagging After $18B Outbound Binge? Rendering of the Oyster Point development, which is approved for 209,000 sq m of R&D and office space

The potential project sale follows a headline-making deal spree in which Greenland, currently mainland China’s fourth-largest developer by sales, picked up more than a dozen overseas projects across eight foreign cities in two years. The group’s various development projects in the US, Britain and Australia span a total area of 5.57 million square metres with a cumulative investment of $18.6 billion, according to the group’s corporate website.

The news that Greenland may be offloading its latest US acquisition could also mark the latest in a series of overseas gaffes for the developer, which last November shelved the $200 million purchase of a 41 percent stake in Manhattan’s Park Lane Hotel amid US scrutiny of the vendor’s assets.

Earlier in November, Greenland’s partner in the Pacific Park project in Brooklyn revealed a potential $1 billion write-down on the $5 billion residential project in which Greenland chairman Zhang Yuliang took a 70 percent stake in 2014. Greenland has also faced setbacks with projects in Melbourne and Sydney. Greenland’s change of course comes after a number of China’s biggest outbound investors cut back on outbound deals this year in the face of government scrutiny.

In August, Wang Jianlin’s Dalian Wanda Group sold off a £470 million London housing project immediately upon closing the acquisition, after regulators in China had punished the company for excessive leverage as part of a crackdown on what have been labelled “irrational deals.”

Commenting on the sentiment among Chinese investors who might formerly have pursued overseas assets, one Shanghai-based investment advisor noted a significant shift in 2017.

“We have really seen a slowdown in activity since the first quarter of this year,” said Mark Suchy, Managing Director of boutique investment brokerage Core Capital Asia. “Even Chinese investors with capital outside of the country have become more cautious as they don’t want to make waves back home.”

Suchy, who previously had advised some of China’s largest investors on acquisitions in the US and Canada, added that while the overall value of deals has not dropped precipitously, the volume of cross-border transactions has decreased significantly.

China’s clampdown is expected to slash overseas property investment from $10.6 billion in 2016 to $1.7 billion this year, an 84 percent plunge, according to a recent report by Morgan Stanley. Investment is predicted to drop another 18 percent in 2018.

In addition to Wanda and Greenland backtracking on their outbound ambitions, Anbang Insurance, the troubled insurance giant whose chief Wu Xiaohui disappeared into detention in June, is reportedly being pressured by Chinese authorities to dump its more than $10 billion portfolio of overseas assets including New York’s Waldorf Astoria hotel and bring the proceeds back home – claims that Anbang has denied.

Ping An Real Estate, which had funded billions of dollars in investments in US and UK property assets over the past three years, has also grown quiet in 2017. The insurance arm of the mainland financial giant has hung back from cross-border acquisitions since it scooped up a 50 percent stakein a planned commercial complex on Sydney’s Circular Quay in November 2016.