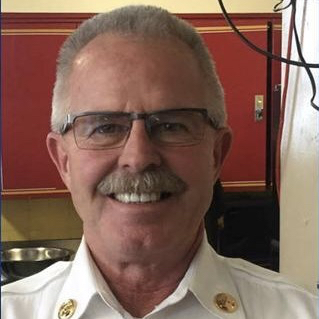 Terry Smerdel passed away peacefully on September 10, 2017 while on duty at San Francisco Fire Department’s Station 2.

He was born to Terry and Lottie Smerdel 59 years ago and is survived by his soul mate Cyndy. Terry was also the loving father of his two children Danica and Jack, beloved brother of Tony and sister-in-law Diane, adored brother of Cathy and brother-in-law Harry, and proud grandfather of Christian. He also leaves behind Danica’s husband Vince, Jack’s fiancé Christine, his nieces Amanda, Amy, and Kayleigh, his nephew Nathan, his Uncle Roland Quintero and the Quintero family, the Stanaway family, and the countless communities he touched with his booming laugh and giving spirit.

Terry, born in San Francisco in 1958, lived every day of his life with an infectious joy. You couldn’t leave a conversation without a smile or giggle, and you couldn’t be in the same room as him and not know it. His life was centered around what he could do for other people, and generosity and kindness will forever be synonymous with his name. He never gave up on people, and his biggest challenge was telling anybody ‘no’.

Terry grew up on Mangels Avenue with some of his oldest and wildest friends. Wild is a key word in Terry’s life. While his years of shenanigans were more than wild and the stories are left to prove it, he was also wild with honesty, love, and empathy.

When he entered the fire department, following in his father and brother’s footsteps, he embarked on a 26 year long journey of service. He spent the majority of his career at Station 17, then as captain of Truck 2 in Chinatown, and lastly at Station 15. Terry was recently promoted to Battalion Chief at a ceremony surrounded by his families – the Smerdels, the Masettis, and the San Francisco Fire Department. His evening was made perfect not by the honor of the presentation, but by his introduction as ‘the good Smerdel.’ Terry was constantly bringing family and friends to the firehouse and his fire department family painfully mourns his loss as a beloved brother and friend.

Terry was also the successful business owner of Green Carpet Landscaping and Maintenance. Known for his integrity, Terry always kept his word. Yes, he might have been late, but he always got it done. He worked hard his entire life, inspired his children to pursue what they care about, and built the love, happiness, and security that surrounds his family.

His faith shined brightly each week at St. Robert’s Parish. His memory lives on through each prayer he led and through each confirmation class he taught in such personal and touching ways.

From golfing monthly with his best friends to winning weightlifting competitions back in the day, Terry has always been an active and energetic soul. He especially loved fishing and hunting with his friends, a loyal pack who returned year after year with the promise of cigars and a good time. Terry spent his winters sitting in his waders in duck blinds right next to his brother and best friend Tony, his hunting partner for over 45 years.

Speaking of siblings, Terry and Tony did most things side by side including watching after their sister Cathy. Terry would harshly inspect and perhaps scare each of her boyfriends. And when he wasn’t doing that, he’d be sure to either ask her to get the milk or tell her how proud of her he truly was.

All of the communities that Terry touched only begin to illustrate his boundless love. His family was the center of his universe. Cyndy Smerdel is the woman that turned a bad boy into a loving husband, and their unconditional love built a trust only few ever experience. He was her Disneyland, her happiest place on earth. Danica, Terry’s first born, was his pride and joy. He protected her with his whole heart, and left this world knowing she is in the very best of hands with a family of her own. Jack, Terry’s son, was far more than a son to him. Jack was his best friend. Terry would sing loudly as Jack played the piano, he’d smile proudly as he coached Jack’s teams, and he’d cheer loudly as they toured the country watching major league baseball games.

It’s clear that Terry was taken far too soon. However, we move forward knowing how aware he was of every single blessing in his life. He left this world the happiest he had ever been, which is fitting since he made all of our days brighter, all of our smiles wider, and all of our lives just that much happier.

Visitation will begin Monday, September 18 at 6:00pm at St Robert’s Church, 1380 Crystal Springs Rd. San Bruno, followed by the Rosary Vigil at 7:00. The Funeral Mass will be on Tuesday, September 19 at 10:00am at St. Ignatius Church, 650 Parker Ave San Francisco. Parking will be available at the Koret Center and surrounding campus lots. Committal will follow immediately at Holy Cross Cemetery, 1500 Mission Rd. Colma.