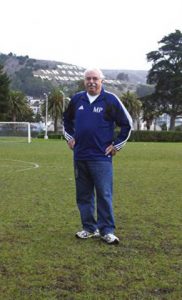 Coach Mike Pizzo began coaching soccer in 1974 when he volunteered in the American Youth Soccer Organization in South San Francisco. He eventually became the Regional Commissioner for SSF until he moved on in 1983. During his time in AYSO, he coached all different age groups but guided the Under 18’s for seven years from 1976-82. During that stretch his teams won 3 Division championships and compiled a record of 57-11-6 including an unbeaten streak of 21 games.

In 1984, Mike took over the reigns of South San Francisco A.C. from Alvaro Bettucchi, the teams original coach. SSFAC won the 2nd Division Championship in 1996 with a record of 13-1-4 and were promoted into the 1st Division where they continued league play until 2006 when a 2nd place finish provided them with promotion to the Premier Division. Since 2013, the team has competed in the Majors Division, the top Division of the Peninsula Soccer League

During Mike’s 33 years with SSFAC, he has seen many talented players, and competed against some of the best clubs in the Peninsula Soccer League. Coach Mike also serves as a board member to the PSL, and is the disciplinary chairperson for corrective actions pertaining to red card violations.

Mike also coached women’s soccer in the Golden Gate Women’s Soccer League from 1995-2005. With his oldest daughter Stacey as the teams defensive sweeper, they won 5 division championships during their run.

In 2007, Coach worked for the California Victory professional soccer team of the United Soccer League. He was the Game Day Operations Manager for the USL team, as well as handling the PA announcing for all home games at Kezar Stadium in San Francisco. Mike also spent that year volunteering his time with the PDL San Francisco Seals..

In 2008 Mike went to work for the San Jose Earthquakes of MLS as their Visiting Team Liaison. and also works with the Burlingame Dragons FC of the PDL, an affiliated team of the Quakes.

After 34 years of coaching the SSFAC, Coach Mike Pizzo has announced he will be turning the reins over after this season. He leaves a great legacy for which our City is thankful.

← How it All Began…..The History of SSFAC by Alvaro Bettucchi
SSF Offers Construction Update Meeting for Downtown Business Owners Oct 4th and 8th →