The South San Francisco Police Department requests the assistance from the public with the identification and location of the suspect driver and vehicle in this fatal collision. This investigation is on-going and anyone with information regarding the incident are encouraged to contact the South San Francisco Police Depatiment at 650-877-8900, the anonymous TIP line at 650-952-2244 or via email; at tips@SSF.net 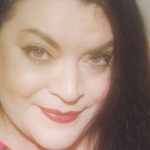 The victim has been identified as TERESA GONZALES from South San Francisco, a single mother of two. Her children have established a Go Fund Me to help with funeral expenses. Please CLICK HERE to access that site, donate if you can and leave words of condolences.