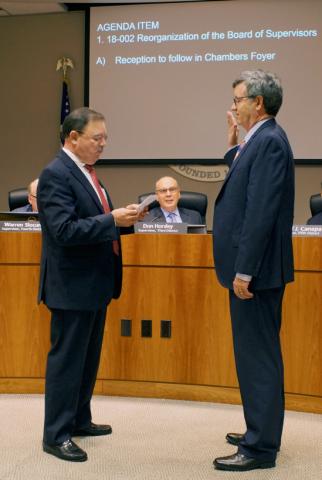 The San Mateo County Board of Supervisors held its annual reorganization today, choosing as its 2018 president District One Supervisor Dave Pine who said his priorities for the next year include hiring a new county manager, implementing the County’s capital program, and focusing on transportation and water related issues.

After naming Pine as president, the Board also unanimously selected Supervisor Carole Groom as its 2018 vice president.

In remarks after accepting the nomination, Pine outlined several focus areas for the next year: hiring a new county manager to replace John Maltbie, who announced his intention to retire by the end of 2018; collaborating with San Mateo County Transit District to prepare for a possible transportation-focused half-cent sales tax; improving or building modern and energy-efficient County facilities that will meet the County needs well into the second half of this century; and addressing water-related concerns including sea level rise and flood resiliency.

“I often tell people that this is the golden age of San Mateo County. What I mean by that is we are fortunate to have a powerful combination of assets that have allowed us to achieve remarkable things and to take on challenges that few counties can,” Pine said.

Those assets, he said, include “considerable financial resources, a uniquely talented county manager’s office and team of department heads, dedicated and hardworking employees, a culture of collaboration and a Board of Supervisors that brings a problem solving mindset to the issues we face.”

He joined the Board in May 2011 and last served as Board President in 2014. His areas of focus have long included issues related to climate change — one of his 2018 presidential priorities — and he led the effort to establish Peninsula Clean Energy that providing 80 percent greenhouse gas free energy to all residents and business in the county.

In 2018, Pine said he will highlight work by the County and its partners on a variety of sea level rise, flood control and other water related projects through a series of brief presentations to the Board and by convening a conference in March to discuss integration and collaboration on water issues.

Pine succeeds District Three Supervisor Don Horsley who last year launched “Conversations About Black History,” a discussion at each 2017 regular Board meeting focusing on how individuals’ similarities outweigh their differences. In his remarks before handing over the gavel, Horsley also ticked off several notable Board achievements in the past year including the ongoing successes made possible by Measure K, the voter-approved half-cent sales tax devoted to maintaining critical needs and services, and the Home for All initiative which aims to provide affordable and accessible housing for all. The Board also signed off on several significant capital improvements and undertook a yearlong effort to craft local regulations regarding cannabis.

“Our collective goal is to make our residents’ lives better. And while we continue to make progress in making this a great place to live, recreate and do business, we will continue to be challenged,” Horsley said.

The Board spent 2017 often wrestling with unknowns from the new federal administration including proposed changes to the Affordable Care Act, concerns regarding immigration and the decision to exit the Paris Climate Accord. In response, the Board assured the community it remained committed to diversity, inclusion and environmental protection.

Today, Pine further affirmed those local commitments and values that he said remain under threat from the presidential agenda.

“Every day we wake up and read the national news and are reminded that this is a difficult and tumultuous time for our country. Many of the values and policy priorities that we hold dear in San Mateo County are under threat. While we cannot control the course of events in Washington, what we do locally matters and is an expression of our values,” Pine said. “So as we move forward, let us remember that we are uniquely positioned to make an enormous difference to the quality of life in San Mateo County, and by showing leadership our work can also influence policy making throughout California and indeed the country.”