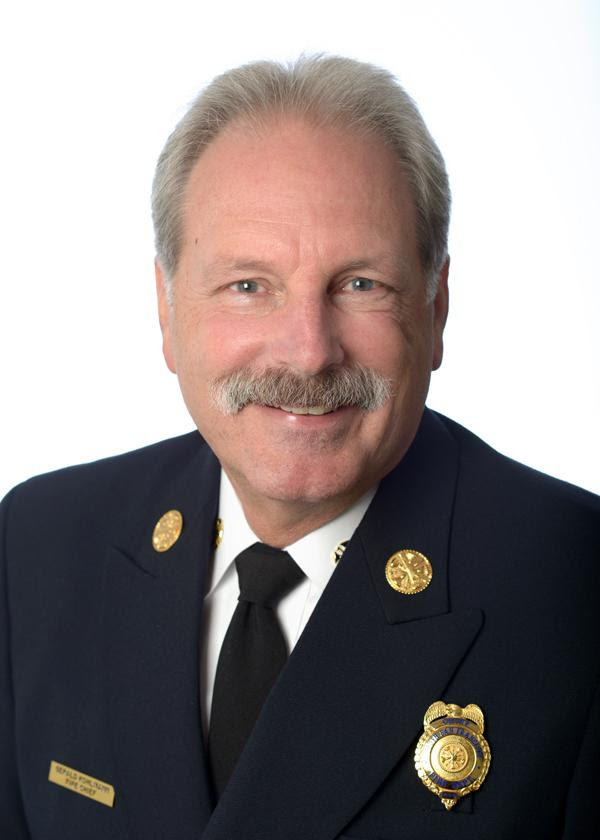 At last night’s South San Francisco City Council meeting, Mayor Liza Normandy and the entire City Council recognized Fire Chief Gerald Kohlmann upon his retirement from the City at the end of the month.

“The entire City Council values Chief Kohlmann’s leadership and it is with mixed emotions that we say goodbye to our Fire Chief,” said Mayor Liza Normandy. “During his tenure in South San Francisco, he has achieved so much, and for that, we are truly grateful for the leadership and guidance he has provided all of us. He will be missed, but we are also happy for him and wish him the best on his retirement.”

Chief Kohlmann came to South San Francisco in 2015, at the time bringing with him 32 years of experience as a firefighter, working his way up the ranks from firefighter to Deputy Fire Chief of the San Jose Fire Department, and then Fire Chief of the Redwood City Fire Department. The most profound assignment in Kohlmann’s career was a 12-day stint in the rubble of the post-September 11 remains of the World Trade Center in New York City. Kohlmann was deployed to New York with 62 other Bay Area firefighters as part of the Urban Search and Rescue Team (USART). At the World Trade Center, Kohlmann functioned as a team leader and planning officer.

In addition to working in the public sector, Kohlmann also brought private sector experience as a consultant and as a Senior Public Safety Specialist with PG&E where he taught Incident Command Courses, developed emergency response plans, and worked with local public safety agencies on emergency response training.

“What Chief Kohlmann brought to the City is invaluable and has made our City more prepared when it comes to emergency response,” says South San Francisco City Manager, Mike Futrell. “Beyond emergency response, however, he turned this Fire Department around and refined the Fire Department’s budget management processes, recognized emerging needs to ensure our City is safer, and assisted in upholding consistent communication process both internally and externally in an effort to make certain the Fire Department was in line with the City’s overall mission.”

Deputy Chief, Jess Magallanes will serve as the Interim Fire Chief through this transition to provide stability and leadership for Fire staff and the community. Magallanes has been with the South San Francisco Fire Department for 21 years. He joined the South San Francisco Fire Department four months after graduating from the University of California, Berkeley, and served as Battalion Chief for eight years prior to being appointed to Deputy Chief in 2016.

City Manager, Mike Futrell, will fill this critical appointment in the coming months after seeking input from the City Council and the Fire Department staff on essential qualities needed for the next Fire Chief to continue the work that Chief Kohlmann has so successfully implemented.