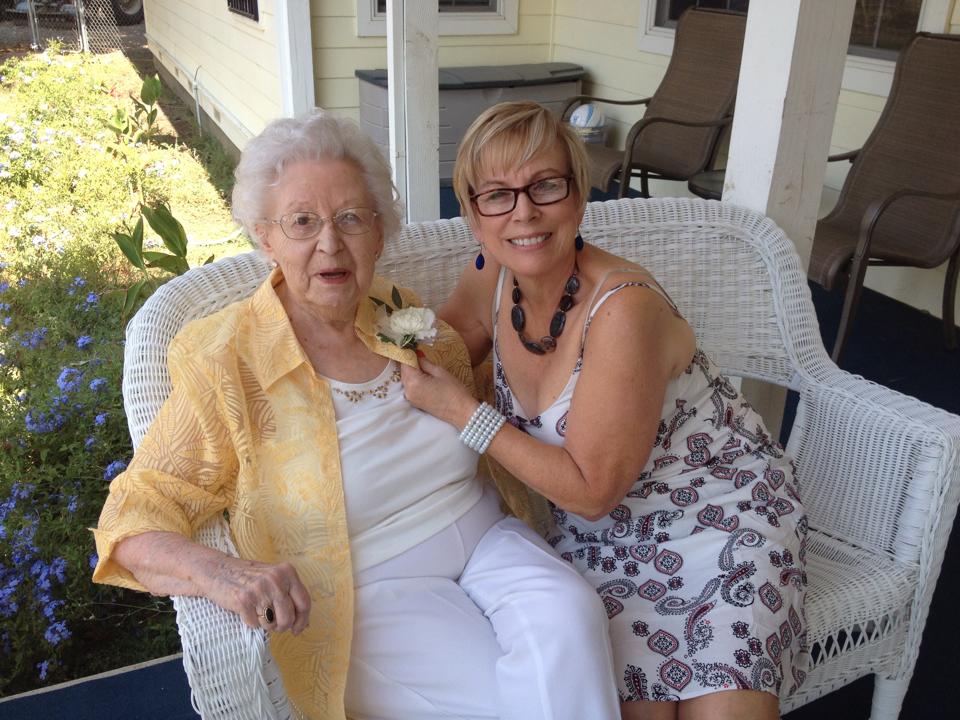 Sally Baskin pictured with her daughter Linda Baskin Aug. Sally, and her husband Harold, raised seven children in Avalon Park; being one of the first families in the new development they also helped to establish St. Veronica’s Church.

Her parents, George and Justina Kreucher moved the family to Curie, MN shortly afterward. There, along with seven sisters, Sally attended grade school and high school. After high school she moved to Rochester, MN where she met the love of her life, Harold. They were married in Currie, MN, Aug. 22, 1939. Harold served in the Navy and after WWII, they moved to California. In the late 1950’s, Sally and family moved to South San Francisco where she worked for See’s Candies for 25 years while raising their seven children.

After retiring, Sally and Harold moved to Lakeport for a number of years, then to Woodland to be nearer to their children and grandchildren. Sally’s first love was family, then crossword puzzles, and bridge. She and Harold were avid tournament bridge players for many years, both attaining the rank of Life Master.

Sally was a loving mom to her seven children, Denis (Patty), Joanne (Richard), David (Judie), June (Craig), Mary (Gene), Carol (Dan), and Linda (Rich). She was also devoted to her 20 grandchildren, and 27 great grandchildren. She was loved by everyone and will be greatly missed.

A rosary and viewing will be Monday Feb. 12 from 5 to 8 p.m., at the Woodland Funeral Chapel, 305 Cottonwood, Woodland. A funeral Mass will be held Tuesday, Feb. 13, at 10:30 a.m., at Holy Rosary Catholic Church, 301 Walnut St, Woodland. She will be interned at the Capay Cemetery in nearby Esparto, CA.