With the help of the California National Guard and community leaders, Magnolia Center senior citizens sent 1,800 handmade valentines to servicemen and women from the Golden State who have been mobilized to active duty and deployed in Afghanistan and the Greater Middle East, Ukraine, Kosovo, Africa and across the Americas.

The valentines should be in their hands soon, if they aren’t there already – even though more cards handcrafted by the South City seniors are traveling greater distances to more places this year than ever before in the 10-year history of the Magnolia Center’s valentines project, according to the center and the California National Guard.

“It’s a new record,” said Major Shannon Terry of the California Military Department in Sacramento. Deployed in Iraq in 2006, she knows firsthand how precious mail from home – especially handwritten cards and letters – can be to a soldier overseas. That’s why she attends the South City seniors’ annual card-making fest whenever she can.

“We love this event – I love this event – and we enjoy our time with the seniors,” said the major, who joined the valentines-makers at the Magnolia Center on January 26 with Sergeant First Class (CA) Rebecca Wolkenhauer, also of the California Military Department, and Staff Sergeant Dandrell Thomas, Senior Airman Candice Guintu and Airman First Class Tam Tran, all of the California Air National Guard 129th Rescue Wing based in Mountain View. 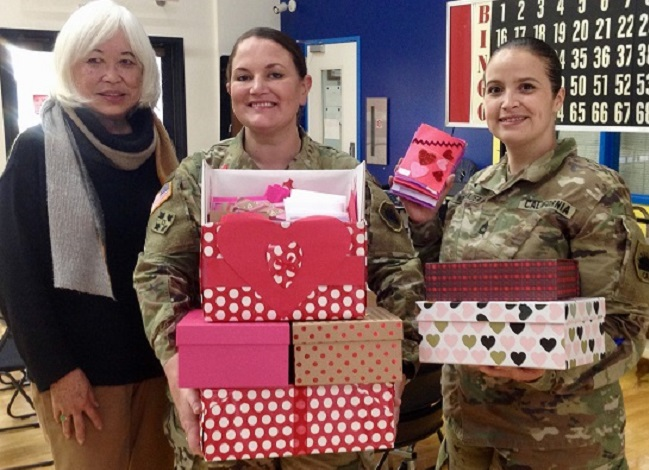 For the South San Francisco seniors who gather at the Magnolia Center, the feeling is mutual, said Recreation and Community Services Supervisor Kelli Jo Cullinan. “Thank you so much for your support and service,” she told the members of the California National Guard.

When it began a decade ago, the card-making project was largely the work of a core group of the center’s seniors and a few guests for an hour or two during a single morning. They made dozens of valentines the first year. Each year afterward the number grew, reaching 1,200 in 2016 and 1,400 last year. Today, the project that the South City seniors now call “Operation Valentine” begins months before Cupid’s holiday. It culminates with a celebration breakfast on the morning that the final batches are made, then bundled into festive boxes with the rest of the year’s output and presented to the California National Guard.

Marc Hershman, district director for state Senator Jerry Hill, noted how the event has grown over the years and how popular it has become in the community. “This is an extravaganza,” he said, offering greetings on behalf of Senator Hill who, with North Bay legislators, was conducting a hearing on wildfire safety in Santa Rosa and was unable to attend. 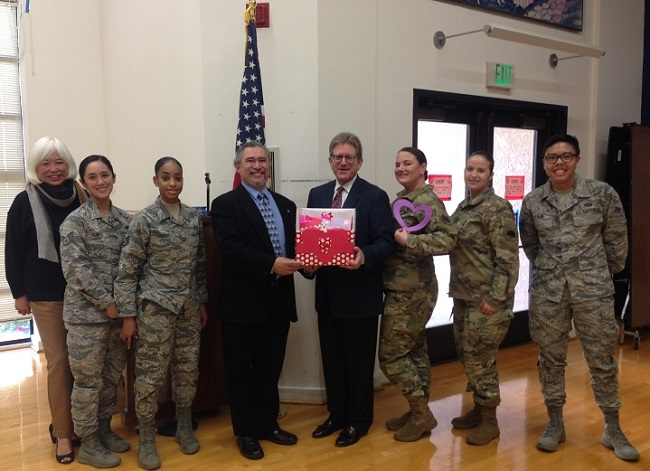 Newcomers and longtime participants in the Magnolia Center’s craft’s project share a common goal, Hershman said, to bring the joy of receiving a valentine and acknowledgment of their service to California soldiers who are far from home. “For so many of us, our first memory of valentines was selecting and writing Valentine’s Day cards and giving them to all our classmates at school,” he said. “It was special, something we looked forward to and they looked forward to. You’re re-creating that memory today for our troops.”