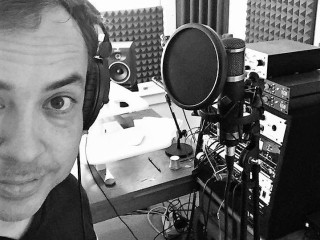 Since the debut release of his record “Weathervane”, Jeff Desira has begun the process of recording a new project with acclaimed Producer Chris Manning… but he needs your help.

Raised in the Brentwood neighborhood, South San Francisco high school graduate Jeff Desira was involved in the music program all four years and has used that education as a spring board to fuel his passion in a successful musical career.  “I played flute from 1986 to 1988 and in my final year I played the schools only synthesizer for assemblies and football games.” Jeff said. “I was fortunate to learn under the direction of Mr. Galisatus and Mr. Tribuzzi and appreciate that opportunity.”

Jeff has since moved to San Francisco where he has recently performed with members of Camper Van Beethoven, Cake, and the Romeo Void Band. His first recording ‘Weathervane’ in 2014 was a successful solo debut and he is excited to be working with legendary music producer Chris Manning (Jellyfish, Guster, Third Eye Blind, Bouncing Souls, Eric Martin) on his upcoming ‘Summer to Fall’ album and is fundraising to make this a reality. “I’ve only got 4 weeks left to reach my goal” Jeff said.  “There are lots of fun perks for donating – even for as little as 10 bucks. It only takes a couple minutes, and I’d be so very grateful for anything you could contribute and thank for taking the time to read and for your consideration”

To be part of his journey and donate CLICK HERE

To catch a few sweet licks and hear directly from Jeff  CLICK HERE.

Hi Everyone!! Many of you already know who I am – but for those I haven’t met yet, my name is Jeff Desira and I’m a songwriter, vocalist, and muti-instrumentalist from San Francisco, Ca. My Genre is Alternative Rock, but within my music you can hear elements of Acoustic, Folk, and Americana. I’ve made many records in the past, but I’m currently working on my second solo effort entitled “Summer to Fall”.

My last record (“Weathervane”, 2014), produced by Scott Mickelson, was a successful solo debut achieving not only sales within the United States and abroad but gained the attention of film producer Brian DiMuccio (20th Century Fox, Outpost 31 Media) who placed 3 of my songs in a new romantic comedy titled “The Way We Weren’t”. (http://www.imdb.com/title/tt4241904/?ref_=nv_sr_4)

My goal with “Summer to Fall” is to bring these new songs to the next level in order to maintain the caliber of material I have to present, so I’ve decided to record this new and exciting project with acclaimed musician and producer Chris Manning (Jellyfish, Guster, Third Eye Blind, Bouncing Souls, Eric Martin). “Summer to Fall” will be a 10 song record, 3 of which have already been paid for out-of-pocket. In order to ensure that each song is met with the treatment they deserve, I’m trying to raise $10,000 to help with the costs to record, mix, package, promote and ultimately tour.

THIS IS WHERE YOU COME IN:

For $10 you can get a digital download of the new record even before it’s officially released!  If you can support more than that, there are many exciting offerings as thanks for your faith and support in the album, ranging from a signed limited print of the album art with an advance physical copy of the record to your own private house concert with all the perks from the lower tiers!

If your wallet won’t allow you to contribute to the campaign, you can still invest in great music by spreading the word about it! Independent music survives when fans share it with their friends. So jump on Twitter, Facebook, or Gmail and use the hashtag #fundjeffinSF to let people know about this chance to support your favorite local singer/songwriter. There are some helpful buttons to the right of my video at the top of this page, where it says “Back It”.

MY PLEDGE TO YOU IN RETURN:

– An album of my best work to date with outstanding production.

– I’ll stay connected throughout the production process via email and social media..

– You will have your pledge items delivered to you as promised.