After hearing last minute meeting information, South San Francisco residents are understandably angered over what they consider the City’s sneaky attempt to sell City owned property to one of 12 developers who had been instructed to produce renderings of their ideas for a nearly 6 acre parcel on Old Mission Road near Chestnut Avenue. Two of the finalists were invited to present their unambiguous plans for up to 15-story towers that City leaders decided would fit in the area without any regard to the residents’ input.

In one of the misleading marketing pieces put out by the City that caused upset by a group of neighbors was the ‘survey’ relating to this development. “The questions they ask force answers the City is seeking” a neighbor wrote. “This is the same stuff they did with the Measure W campaign.”

South City resident Cynthia Marcopulos calls the survey invalid. “The PUC survey is anonymous thereby insuring that any person, even those who do not live in our fair city, can complete the survey without a double check making sure they are, indeed, a South San Francisco resident.” She wrote in an email to City leaders requesting clarity, “I request that Item 6 {name/address} be revised to include the words ‘required’ instead of ‘optional’.  If it is not completed in its entirety, including the contact information, then it is deemed invalid and is not counted.”

“I too would like to see ‘required'” Mayor Liza Normandy responded while directing City Manager Futrell and the Director of Communications to change the verbiage. 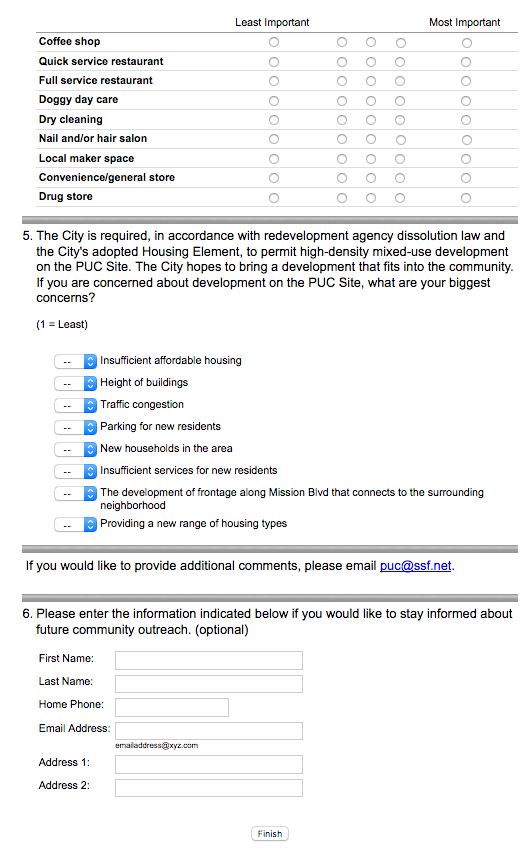 Mayor Pro Tem Karyl Matsumoto agreed.  “The anonymity of the response allows for the data collected to be skewed by parties who might be invested in the outcome. Some of the options presented are not feasible even though we would like to have them.  In addition, very few know what ‘local maker space’ is. There are more germane questions that should have been addressed in this questionnaire.” she responded.

It appears a number of residents are not too thrilled with the antics out of City Hall and the ‘half baked surveys they put out’ as one neighbor called them.

“I was called. They didn’t ask us about traffic, the over building of our small town, and the lifers on the council. Everyone knows polling asks questions to what they know the answers before asking.” South City resident Neil Gentry commented in response to the ‘Quality of Life’ questionnaire the City put out earlier this year. “We weren’t asked that we think about all the windfall of money, the parks are a disgrace for a small town. WE didn’t vote for a ‘civic center’ with an expensive fire house(that is not needed). Measure W passed because they changed the rules and the wording in the ballot statement. We were a nice small town but now we’re handled by a City manager who is a politician, advising our politically naïve city council.” {*City Survey Reports 84% of 471 Residents Questioned Satisfied with SSF Quality of Life }

The topic of Measure W and how our City ended up voting in favor continues to be a pretty strong topic among many in our community as this article on SSFResidents4SmartGrowth website explores. With a thought to the City’s surveys Kerry M shared this memorable quote:

‘Aw, you can come up with statistics to prove anything, Kent. Forty percent of all people know that.’ – Homer Simpson

If City Hall really wants to be transparent, perhaps they might take Marcopulos’ words to heart and make changes to this survey they currently have online. “I would suggest that the survey is tainted in that it directs only specific responses to achieve the replies it is soliciting instead of a more, shall we say, generic survey wherein the residents give their opinions versus being told what answers to give, that is, check off only these replies provided by the survey.”

A new survey was released and can be found on this link: https://www.surveymonkey.com/r/DDZVQZ7

The 2 council people have no credibility on this or any issue facing quality of life issues related to more building.

Put it on the ballot for the community to vote on the November ballot, that will be the most accurate survey what residents want for SSF. Show us some respect council, show us that you believe in quality of life for SSF.

i cant do the surveuy because it said i did it already but i didnt they dont care anyway they jst want to be big shots and they keep changing stuff
make them stop destroying our city and bringing more people in here, we were fine without them. who can make them listen? they dont care about people who made this city they want new people.