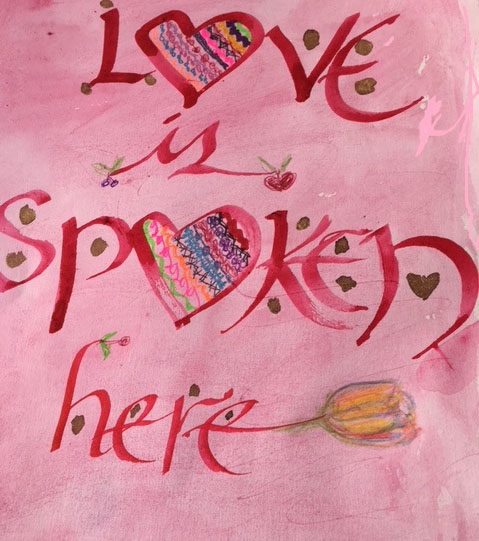 In a divisive world, we in South San Francisco advocate love instead of hate and violence with an art piece that uses calligraphy and lettering arts “LOVE IS SPOKEN HERE”. This love is also dedicated to the unique love story of Prince Harry and Meghan Markle who will marry on May 19, 2018.

Herman Zapf, 21st century renowned calligrapher and typographers wrote in his essay that a calligrapher has “a burden of responsibility: the heritage of the great masters of the past, the tradition of the scribes of the Middle Ages, of the royal and imperial ancestors in Europe and Asia.” Calligraphy is still a royal activity. The Princess Elizabeth who became Queen Elizabeth I was a trained calligrapher. She was able to hand calligraphy her prayer book when she was 12 years young.  The current Queen Elizabeth II has a position “Scribe to the Queen” like Donald Jackson who headed the Saint John’s Bible Project, whom was one of the scribes.

What a surprise and a delight to know “American Princess”  Meghan Markle  is a calligrapher. I was immensely delighted in 2005 when Steven Jobs championed calligraphy in his Stanford commencement exercise. The reason for the delight; I was a Fort Mason calligraphy coordinator for several years and predicted that since the world is becoming too digital, electronic and noisy with too many social media platforms. People will eventually take up calligraphy, a peaceful endeavor to slow down and meditate by writing with their hands.

In 2005, before her acting career took off, Meghan did the calligraphy for Paula Patton and Robin Thicke’s wedding invitations as well as their ‘Save the Date’ cards. “I just thought Meghan did a beautiful job,” Patton is quoted telling Town & Country of her custom invitations and save-the-dates done by Markle. “It really is a lost art, and it was so nice to create something without a device that doesn’t use a battery or need to be plugged in.” {CLICK HERE to view the invitations.}

Years later, in 2013 Meghan was on The Larry King Show and demonstrated her pointed pen calligraphy, which she learned while attending an all girls Catholic school as a child. To see her demonstration CLICK HERE

Aside from being an actress and television personality, Meghan stands up for several advocacy and charitable causes such as Global Ambassador for World Vision, women rights, clean water, UN Ambassador for refugees. A role she will fill in as part of royalty duties like the late Princess Diana, mother of Prince Harry. For more details on her advocacy efforts CLICK HERE.

Artist/calligrapher Elizabeth Nisperos works as a software engineer and recently received an Award Certificate from Google Code Corps for being a STEM(Science, Technology, Engineering, Mathematics) mentor to kids, combined with Arts/AI Robotics.

About the art piece

Love is Spoken Here 8 x10 size  is one of the award-winning art pieces in the General Art Show held at Betty Webber Gallery last May 11-12 2918 sponsored by the Art Commission.  To see all the winning pieces, please go to the Municipal Services Bldg. at 33 Arroyo, SSF where they are displayed in a big window.near Council Chambers. Due to copyright infringement laws, the art pieces cannot be posted without artist’s permission.