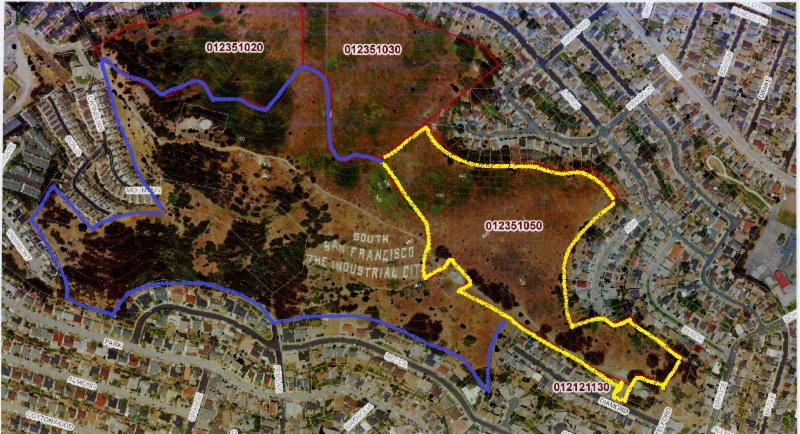 This map which indicates in yellow the purchase/donation of land. Blue indicates what the City currently owns. The area bordered in red identifies the remaining parcels that are privately held for potential development and needs to be preserved.
Source: City of SSF

With deep appreciation to the Liberty family for their generous donation and with help from taxpayers coffers from County made available by the SMC Board of Supervisors ($690,000) and by the City of South San Francisco ($82,500) we will finally have this amazing 21 acre parcel on Sign Hill preserved for all time after years of resident’s lobbying for this area to remain as open space and not developed.

“The purchase of this land ensures permanent preservation of the open space, which is something Council has, for years, wanted to do,” Mayor Liza Normandy is quoted as saying in a press release by the City. “We know how much our residents value and appreciate Sign Hill, so we are excited to be able to offer more open space in our City.”

Cheryl * and Ross Liberty have been the stewards of this beautiful acreage for over a decade and in recent times were seeking to sell to potential developers. Long time advocates of preserving open space San Bruno Mountain Watch and Friends of Sign Hill were ecstatic to learn this news. “This is a long time coming as a project of Mountain Watch and Friends of Sign Hill in partnership with the City of South San Francisco and shows what can be accomplished by neighborhood groups” San Bruno Mountain Watch Boardmember Del Shembari said “We cannot express enough our appreciation to the Liberty family for their generous donation coupled with taxpayer funds from both the County and the City. ”

For decades City officials have expressed the desire to see this parcel added to the 45 acres already owned and preserved by the City of South San Francisco yet the timing never worked out due to the recession and other financial concerns. This addition to our preserved Sign Hill will fondly be known as ‘The Liberty Park’ in honor of the gift from the Liberty family. New trails will be created and maintained by the City’s Park and Recreation Department under the direction of Sharon Ranals who has also worked tirelessly on this endeavor.

“We look forward to working with Sharon Ranals and the SSF Parks and Recreation” Shembari said “And we still need to remember the remaining 20 acres on the western parcel currently owned by the Syme Estate. We cannot rest until our mission is completed: to preserve ALL of Sign Hill for future generations to enjoy.”

Over 60 nature lovers showed up at the Butterfly Hike on Sign Hill organized by Loretta and Chuck and led by award winning Liam O’Brian
Photo: L. O’Brian

This past month Loretta Brooks and Chuck Heimstadt organized another wonderful butterfly hike with Liam O’Brien, a San Francisco’s well-known lepidopterist, artist, illustrator, and Bay Nature’s award-winning environmental educator and had over 60 participants in their group out enjoying the beautiful flora, fauna and magnificent views. Loretta and Chuck are the founders of the SSF Weed Warriors who maintain and preserve the southwestern slope that has large areas of grasslands that are critical to our resident endangered butterflies. They focus on the removal of invasive non-native plants and ask the public to join them on the .4th Friday of each month and the following Saturday. More info CLICK HERE. 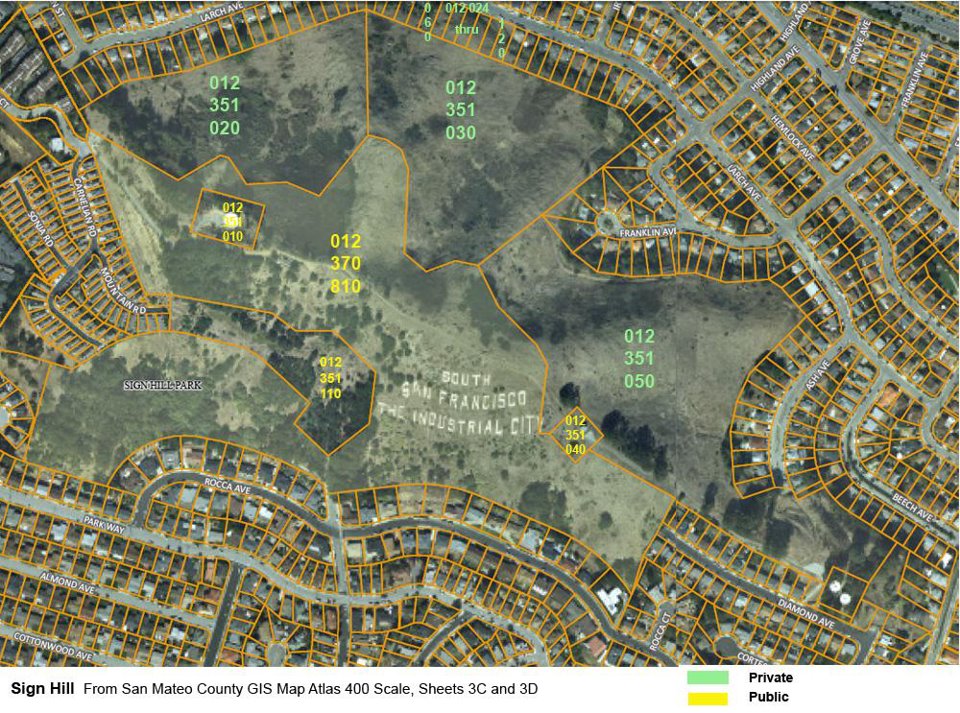 EDIT: Mrs Liberty’s name corrected.Note this property was also co-owned with the Ronald McAgehee & EA Trust to whom we also offer thanks and appreciation.

[…] Hill in South San Francisco have been permanently preserved as open space to be known as “Liberty Park“, thanks to a generous donation provided by Cheryl and Ross Liberty, the San Mateo County […]

THIS IS AWESOME BUT it looks like you forgot to add at least one person who was instrumental in making this happen though. Kamala I know you spent over a decade working hard to preserve Sign Hill for our community and the generations that follow. I remember the meetings you put together, the information you found and provided to all of us, the research you did and all of the behind the scenes follow up and work you did to help make this happen. Thank YOU for all that you do for our city and for giving our community such a fantastic resource for news, updates, information and of course, Everything South City.

This is truly great news I had always thought that sign hill was city property already.I do have one issue with the article and it pertains to thanking the Liberty family and any other co owners. From what I read it sounds like they sold the property to the city which used taxpayer funds to cover the cost. I don’t quite understand thanking someone for selling something that they were trying to sell shouldn’t the taxpayers be thanked for buying the land for future generations of South San Francisco residents? Either way I’m very happy to know that sign hill shall remain sign hill.

Eddy,
Thank you for your comment regarding the acquisition cost. While we do not have the final numbers, we do know the August 2017 appraisal by Pacific Appraisers, at the request of Ross H. Liberty, Cheryl A. and Ronald W. McAgehee Trust, was reported at $4.1M (Financial contributions from the City of South San Francisco $82,000 and for San Mateo County $690,000)
Had the selling parties not made such a generous donation this acquisition could not have taken place. The City does indeed own 45 acres of Sign Hill and an additional parcels of 26 acres are currently owned by the Syme Trust which we hope will one day be preserved as well. (Those parcels are identified with the red border)
Thank you.
-ED

This is great news but I thought it was already purchased for open space a few years ago after the meeting at the Boys Club with Kamala and Mountain Watch. How do we finish preserving the other area owned by Syme LLC? David Gallagher is right, Joe Fernekes worked to protect this, he would be happy to know it’s preserved. It would be nice if a future trail was named after him, Joe’s Trail maybe? I live in Sunshine Gardens and drive by here all the time, it’s beautiful open space.

Chuck and I cannot stop smiling with deep gratitude to Colleen and Ross Liberty and all who have joined us in efforts to “Save Sign Hill”, yet there still remains over 26 acres of the Syme LLC privately-held parcels on this beautiful grassland and native habitat. May it be acquired or conserved to complete the protection of the important open space of Sign Hill. Many thanks to our Supervisor Dave Pine who seems to have just given the go-ahead for a much needed weeding program on these public parts, also to Sharon Ranals for getting that going. And Chuck and I will continue our monthly Weed Warriors program on the south slopes of San Bruno Mtn. the LAST Friday and Saturday of every month. Please join us (but please alert us you are coming so we can have tools for you).

I am extremely happy to this parcel saved. Many thanks to the Liberty family, Del Schembari and Chuck and Loretta for working so hard to preserve and protect this rich open space.

Author, The Natural History of the San Bruno Mountains

This is wonderful!!! Saving open land is fundamental to saving the environment and all our sister species. Just as importantly, saving places is essential to the health of our human communities. We all owe a huge debt of gratitude to Chuck, Loretta, Liam, Jake, and all the others who have ceaselessly worked to protect the remaining vestiges of this incredibly biodiverse place. What a wonderful relief to know that this open space will continue to host hikers, teach kids, and salve the mental health of all who care to connect with a special place. THANK YOU!

Congratulations to everyone involved in making this wonderful place a park. Thank you to the Liberty family for their generosity. The residents have strongly opposed any development on the hill for many years, going all the way back to when Joe Fernekes was a council member. What a great accomplishment to the hard working people who fought for this and for our City Council to recognize the need for open space in our city.

I am overjoyed by this acquisition. I paid my first visit to Sign Hill in 1991 and said “we have to save this”. There were many years when nothing seemed to happen. Then I meet Chuck Heimstadt and Loretta Brooks, two very smart people who live there and who are knowledgeable stewards. My hopes rose that we might yet save this. And now, it’s happening.

Thanks very much to everyone involved.