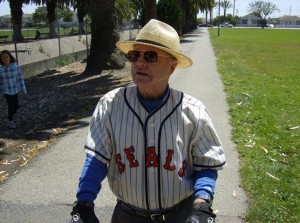 Born in San Diego on November 3, 1925, Brian graduated from San Diego High School and served in the U.S. Navy in World War II on the aircraft carrier Ticonderoga at Okinawa and Tokyo Bay at the war’s end in 1945. A 1949 graduate of UC Berkeley, Brian lettered in varsity baseball. He then coached football, basketball and baseball at Gustine High School from 1950 to 1954.

Brian then moved to South San Francisco High School, where he coached frosh-soph baseball from 1955 to 1958, winning two championships. He coached varsity baseball at South City from 1959 to 2001, winning 21 league titles in 43 years. Upon retirement from coaching at 75, Brian was honored at then Pac Bell Park by Manager Dusty Baker and the San Francisco Giants. Brian coached a total of 1,170 games and won 729, a winning percentage of .623.

In 1960, Brian founded the South San Francisco “pee wee” league, the first known league in the United States to incorporate the practice of coaches pitching to the players. He was also the first high school baseball coach in the country to start a girl (Robin Petrini) on the “boy’s” high school varsity team.

Private burial services will be held. A memorial service will be announced at a future date.