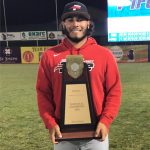 Coach Nick picked up his baseball skills in South City and is now reaching back to help others develop successful skills.

The other day we introduced Coach Nick here on our site because it is rewarding to see those who come up through our South San Francisco sports programs and then turn to give back to our community after they have launched a successful career. Nick played baseball during his four-years at El Camino High School and continued during his college career. Today he is a Collegiate Baseball Player with 20+ years of playing experience who has gone on to coach little league, high school, and even college players covering a great expanse of ages (ranging from 4 to 21) and of all skill levels.

Our GAME ON prize will be awarded to two lucky winners and they will receive a session of private one on one baseball instruction with Coach Nick. The winner will be randomly chosen and announced on Friday August 20th, if we have entries from 20 people who respond to our GAME ON question:

What is your favorite baseball memory?

Share your answers here or email to News@EverythingSouthCity.com to be entered into our GAME ON with the winners randomly chosen and announced on Friday March 20th to win a one on one coaching session!

*Must have 20 entries for game to play

*One entry per person