Family, friends and colleagues gathered for a special badge and swearing in ceremony Tuesday morning in the City Council Chambers as South San Francisco Chief of Police, Jeff Azzopardi, promoted one officer, reclassified a dispatcher, and welcomed three new officers, two dispatchers, and two parking enforcement officers. City Clerk Krista Martinelli administered the oath to the team members in front of a standing-room only crowd. 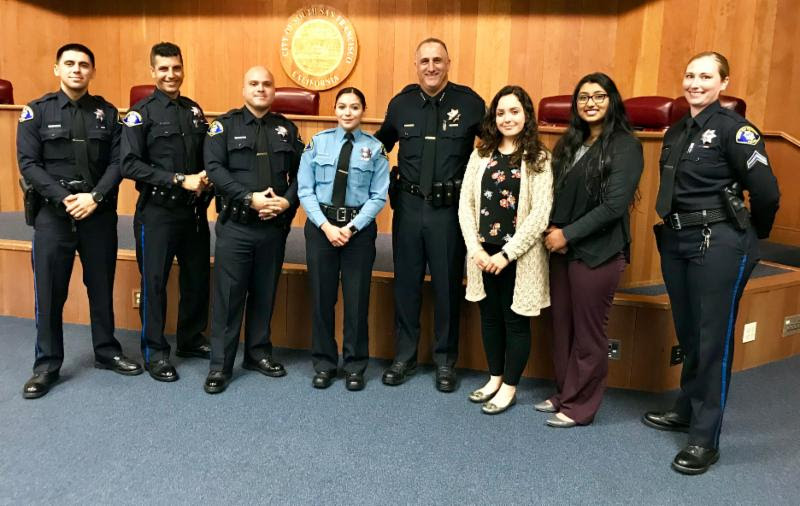 The following people were sworn into the South San Francisco Police Department:

Officer Robert Roman – attended Skyline College and Canada College, as well as graduated from the police academy at the College of San Mateo.

Officer Christian Zocca – enlisted in the United States Army and specialized in Air Defense Artillery as a Corporal. He now serves in the Army Reserves, and is working towards his Associates Degree in Psychology at Skyline. Zocca attended the police academy at Coyote Valley in San Jose.

Parking Enforcement Officer Alexis Juarez – is currently working towards her Associates Degree at Skyline college and plans to earn a Bachelor’s Degree in Psychology.

Payal Ram, who was a Parking Enforcement Officer for the City of South San Francisco is now serving the department as a dispatcher. Ram is fluent in speaking Hindi and her long term goals are to earn a Bachelor’s Degree and become a South San Francisco Police