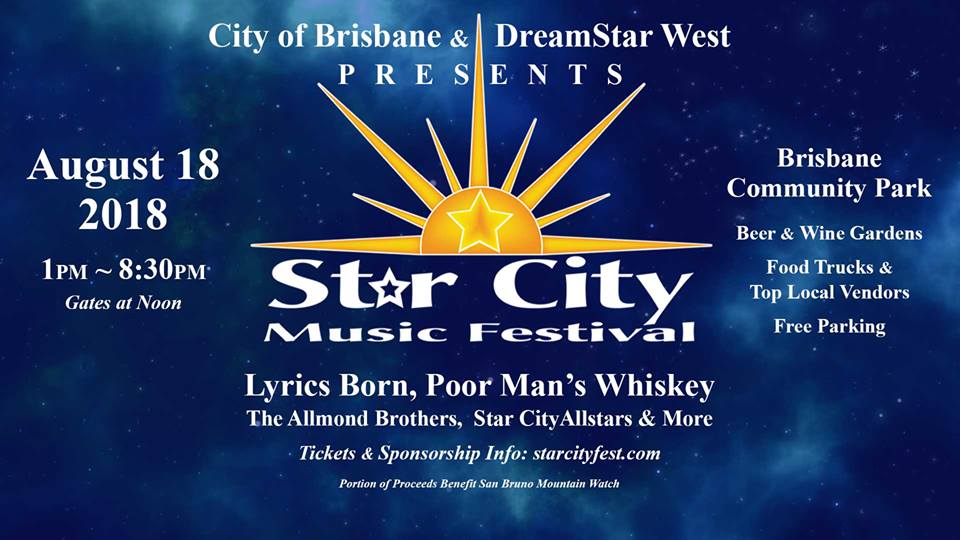 *Morning Star* tix $15 for a limited time at www.starcityfest.com

The inaugural Star City Music Festival was an astronomical success, and we’re thrilled to announce the sequel returning to Brisbane, California—The City of Stars—at the eastern foot of San Bruno Mountain, where the sun hides from foggy San Francisco! On 8/18/18—the Saturday after the last of Brisbane’s Friday night Summer Concert Series—bring the whole clan to this family affair in gorgeous Community Park for a grand finale designed to connect the magical mountainside oasis with its neighbors in Daly City, San Bruno, South SF, the City by the Bay, and beyond.

Production and presentation is stellar. The diverse lineup performs on an impressive transformer-truck stage stacked with a massive sound system. The largest geographic feature on the San Francisco peninsula provides a breathtaking backdrop, and a significant portion of proceeds benefits San Bruno Mountain Watch to help ensure preservation of the precious nature reserve that sits atop the mountain like a crown jewel. The most spectacular views in the Bay Area are up there too!

At the Star City Music Festival, kids under ten get in free, and can go kid-crazy on the spacious playground and in the bounce houses. Food trucks serve diverse delectables, and the Lions Club will purvey festival favorites to benefit their cause of community service. Several bars serve adult beverages including craft beers by South SF’s 47 Hills Brewing Company. Brisbane’s business community including electric motorbike pioneers Alta Motors will showcase innovative products, and non-profits offer valuable information in the gazebo.

See you on 8/18/18 in Brisbane, California, where Everybody is a Star!