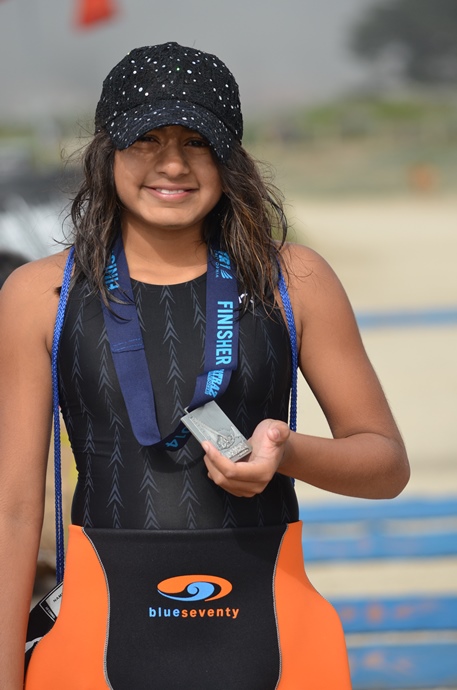 My name is Angel More, I am 15-years-old am attempting to swim the length of Lake Tahoe, a 21-mile swim, on August 24th.
In the past, I swam the Alcatraz swim 51 times and from Golden Gate to Bay Bridge six times. Also, I swam internationally, including swims in Chile, Sweden, South Africa, and England. At the age of 13, I completed my first marathon swim doing a channel crossing, followed by a 12-mile round trip swim between Santa Cruz and Capitola. Then I went on to swim from Anacapa Island to Santa Barbara, a 12-mile swim. And in June I swam 22-miles from Catalina Island to Shore.

The reason I am swimming is to raise money for Children International, an organization that helps youth in poverty get health care and basic necessities so that poverty doesn’t stand in the way of a child’s education. Additionally, I am organizing a fundraiser swim, from the San Francisco shore to Alcatraz and back, called Escape from Alcatraz to Escape from Poverty. I have 14 committed swimmers and a few more interested swimmers, and as a team, we will also be raising money for Children International

Please check out my blog: http://angelmoreblog.weebly.com/ for articles about my accomplishments and more. Thank you!

On August 24, 2018, Angel is attempting the California Triple Crown of marathon swimming, with a 21.3-mile swim across the lengthwise axis of Lake Tahoe as the last swim left on her list. If she completes this swim, she will become the youngest person to receive the California Triple Crown which will add to her collections of previous world records.

Angel More wants to give other kids the platform to reach their dreams by raising $100,000 for Children International youth programs.

What Angel loves about about CI is that in addition to necessities like life saving medical care, food, education and clothing, kids get to find problems in their community and tackle them as a team with grants from CI. Last year kids took on issues such as recycling, chicken farming, education on the dangers of early marriage, and girls empowerment.

Please help me reach my goal and empower kids all over the world!

Daily Open Water Swimming: June 30, 2018, “More To Come: The Next Generation Across Channels”