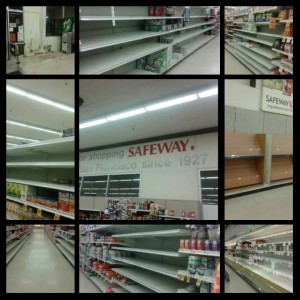 There was a sense of sadness when we saw our old Safeway close for good back in July 2012, six long years ago, yet a feeling of optimism as we looked forward to a new full service store. We’ve watched as renderings come and go along with proposed start dates for too long as we impatiently wait for a new shopping center, a new grocery store. This past week an unnamed source has told us the work is ready to get started in the next month or two after the property has changed hands a few times. We have learned today from the City of South San Francisco that this project is indeed ready to move forward.

“The owner of the property has submitted two applications for a building permit to begin the upgrades to the commercial property. The first application consists of site work for the new pad, as well as grading, landscaping, parking, sewer work, stormwater work, and geotechnical studies. The valuation for the site work is $1.5 million.  The second application consists of exterior renovation of the existing building and a new 1,589 square feet loading doc. The application is for the shell of the building only and is valued at $4.7 million. The tenant improvements for the three tenant spaces, including a new Safeway store and gym, will be submitted at a later date.” The City of South San Francisco has said.

In previous media updates provided by the City they have stated they are all set to move forward. This current proposed development does not include housing.  We will update with more information as it becomes available.

Still nothing is done. So sad. I left that location working at cvs. I was there from 1994 to when it closed.

It is really insane that it has no new structures. It does sound like a remodel and that is not what we wanted. There is a lot of property on this site. Where other structures can be built. But instead it has been all these years and will take years to get anything built or remodeled. Sad

Plus all that new housing on Airport where is everyone going to shop for grocery’s. That little store on Chestnut.

It’s insane that the property has not been improved with a really nice Safeway on the ground floor and apartments or condos above it like the one in San Francisco near Caltrain and AT&T Park.

This sounds like nothing more than a remodel of the existing building with no new structures being built. Disappointing.

If the property has changed hands, why has the City not revived its demand for housing and more buildings like the early proposals?